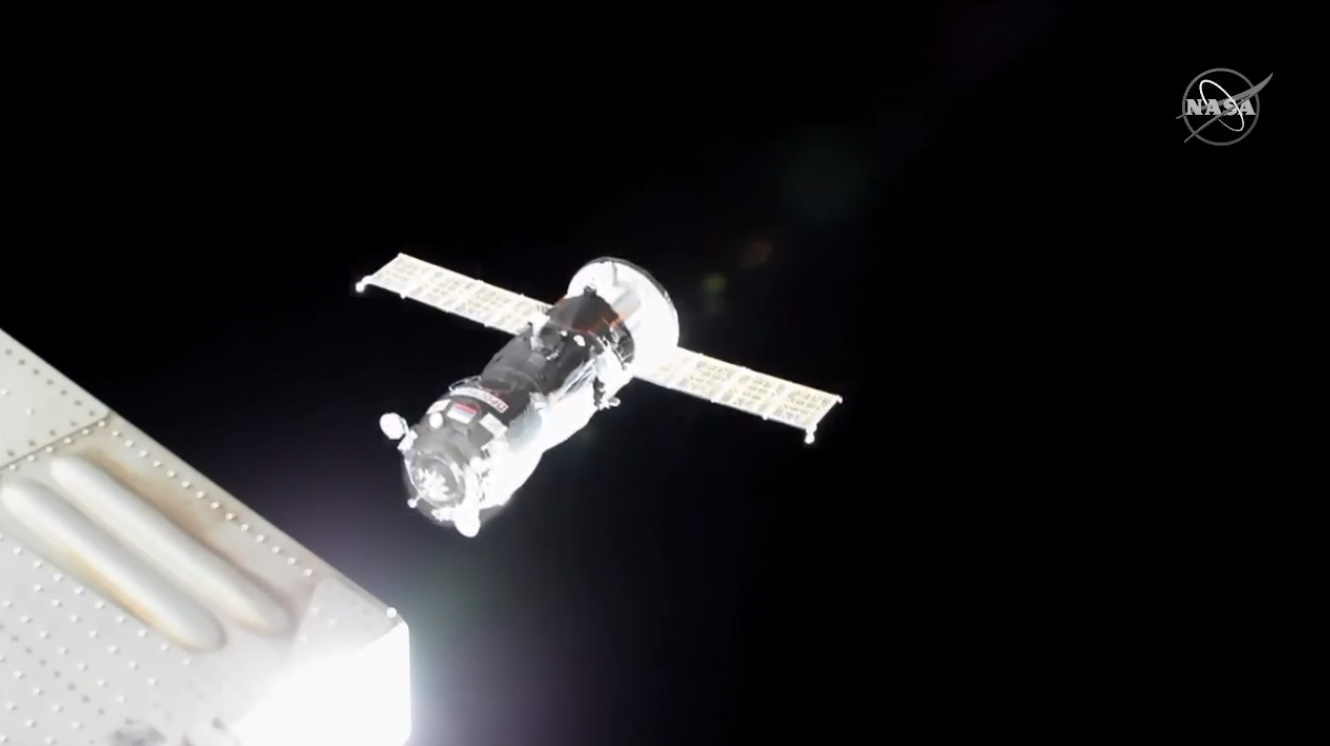 For the third and final time this year, Roscosmos launched its Progress resupply vehicle to the International Space Station.  The flight is the fourth cargo resupply Station mission from Russia this year, with Soyuz MS-14 flying in an uncrewed cargo configuration.

Liftoff occurred at 04:34:11 EST (09:34:11 UTC) from Site No. 31/6 at the Baikonur Cosmodrome in Kazakhstan.  Progress then performed a three-day orbital rendezvous with the Station, arriving on Monday, 9 December for an automated docking.

Overall, Progress MS-13 is tasked with delivering 2,487 kg of supplies to the Station, including:

Without Progress MS-13, the Station’s supplies are well stocked, with the limiting consumable being food – which is currently good out through June 2020.

With Progress MS-13, food will still be the limiting commodity on the Station but will be extended out into the later part of 2020.

Progress MS-13 flew a unique 3-day rendezvous to the International Space Station instead of a two-day or its more standard fast-track 6hr rendezvous due to the conjunction of its arrival with SpaceX’s CRS-19 Dragon capsule.

Roscosmos specialists completed the general assembly of the Soyuz-2.1a launch vehicle with the #ProgressMS13 cargo vehicle.

To avoid two vehicles arriving on the same day within an hour of each other, Progress also performed a 3-day, 49 orbit rendezvous to arrive 24 hours after Dragon on Monday morning, 9 December.

A detailed launch-to-docking timeline is available on L2, here.

The mission launched on the Soyuz 2.1a rocket – a two stage to orbit vehicle featuring a Blok-A core stage, which is augmented by four strap-on liquid-fuelled boosters (Blok-B, V, G, D), and a Blok-I second stage.

The fully integrated launch vehicle and Progress MS-13 cargo craft were transported to Site No. 31/6 at Baikonur on 3 December and erected vertical for final prelaunch processing.

Launch on Friday was timed down to the second to permit Soyuz to execute a flight program that resulted in Progress MS-13 being injected directly in the orbital plane of the International Space Station 8 minutes 45 seconds after liftoff.

In this manner, launch was not timed to the moment the launchpad intercepts the orbital plane of the International Space Station but rather for the precise time prior to plane intercept that will allow Soyuz to launch and enter the dead center of the Station’s orbital plane 8 minutes 45 seconds later at Blok-I engine cut off and orbit insertion.

After liftoff, the Soyuz 2.1a rocket performed a roll and pitch maneuver to angle itself onto the correct azimuth (compass heading) for this mission.

The launch trajectory is designed so that Kazakhstan and the Russian Federation are the only two countries the Soyuz flies over.

Location of the International Space Station in relation to Baikonur (pin drop) at the time of Progress MS-13’s launch. (Credit: GoISSWatch app)

The four boosters burned for 1 minute 58 seconds before separating in the visually-defining Korolev cross pattern; with booster separation, the entirety of the vehicle’s thrust was provided by the Blok-A core stage, which at this point was thrusting at 921.86 kN (207,240 lb force).

About 4 minutes 44 seconds into flight, while the Blok-A stage is still firing, the Blok-I’s engine ignited in the Soyuz’s traditional “hot staging” technique.

The Blok-I fires for 4 minutes, shutting down 8 minutes 45 seconds after launch – at the precise moment Progress MS-13 was inserted into a 210 x 210 km orbit inclined 51.6 degrees to the equator. 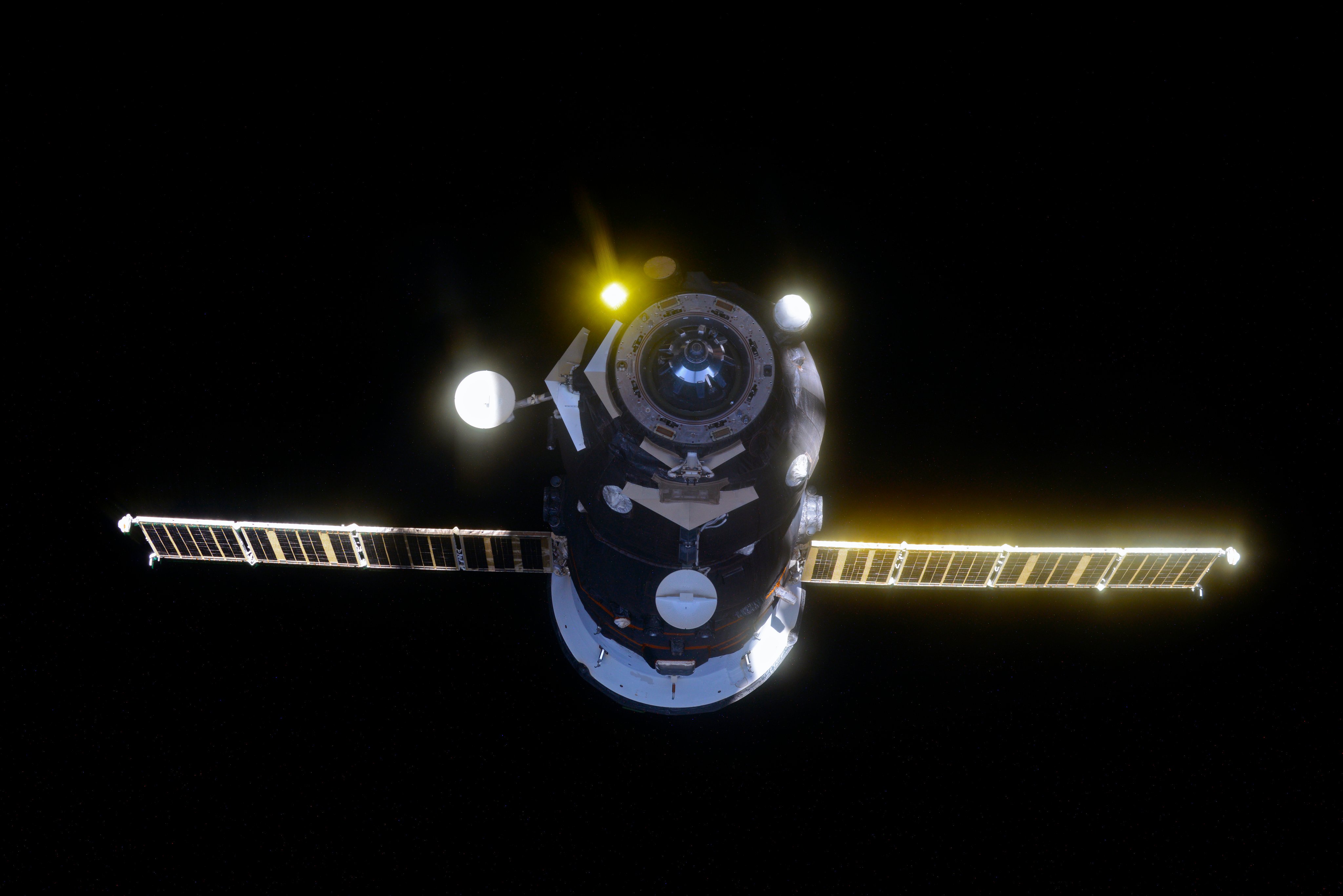 Progress MS-12 in proximity to the International Space Station after undocking on 29 November 2019. (Credit: Roscosmos)

Almost immediately after stage shutdown, Progress MS-13 separated from the Blok-I stage and unfurled its solar arrays and communication antennas.

This immediate deployment is crucial to validating the orbital insertion parameters and health of the Progress through the Vostochny Cosmodrome in eastern Russia to ensure the craft is in the correct orbit.

After that verification, Progress spent the next 49 orbits and 3 days slowly raising its orbit from 210 km to the ~410 km orbit of the Station.

Progress MS-13 executed an automated docking to the Pirs Docking Compartment-1 on the Russian side of the Station on Monday, 9 December, at 05:35 EST (10:35 UTC).