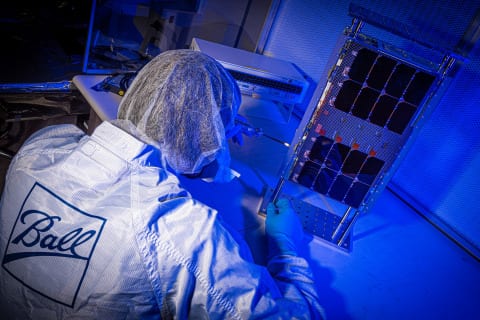 Spaceflight, together with Hypergiant SEOPS, will be launching three cubesats from the International Space Station (ISS) and Northrop Grumman’s Cygnus spacecraft in early January.

The payloads will travel to the ISS through a NASA Commercial Resupply (CRS) mission aboard a SpaceX Dragon scheduled to launch atop a Falcon 9 from Cape Canaveral Air Force Station on Dec. 4. The payloads are expected to reach the ISS several days later. Once they arrive, the ISS crew will transfer the cargo from Dragon to the ISS, where it will be stored for several weeks until the Cygnus cargo vehicle is prepared to depart the ISS. Spaceflight has named the mission SEOPS-2, but it is also referred to as ISS SpX-19/NG-12, representing the two CRS missions converging at the ISS (a SpaceX Dragon and a Northrop Grumman Cygnus). Spaceflight and Hypergiant successfully executed a similar mission, dubbed SEOPS-1, in August 2019 which took three spacecraft to orbit.

“This unique approach to launch from the ISS has proven to be a valuable option for customers looking for a high-altitude deployment,” said Curt Blake, CEO of Spaceflight. “After the success of our SEOPS-1 mission, we were eager to execute another with Hypergiant. These launches are particularly appealing to our customers because of the reliability of the launch vehicles, cost-effectiveness, and consistency in the launch schedule.”

The post Spaceflight to Launch SEOPS-2 Mission in January appeared first on Via Satellite.