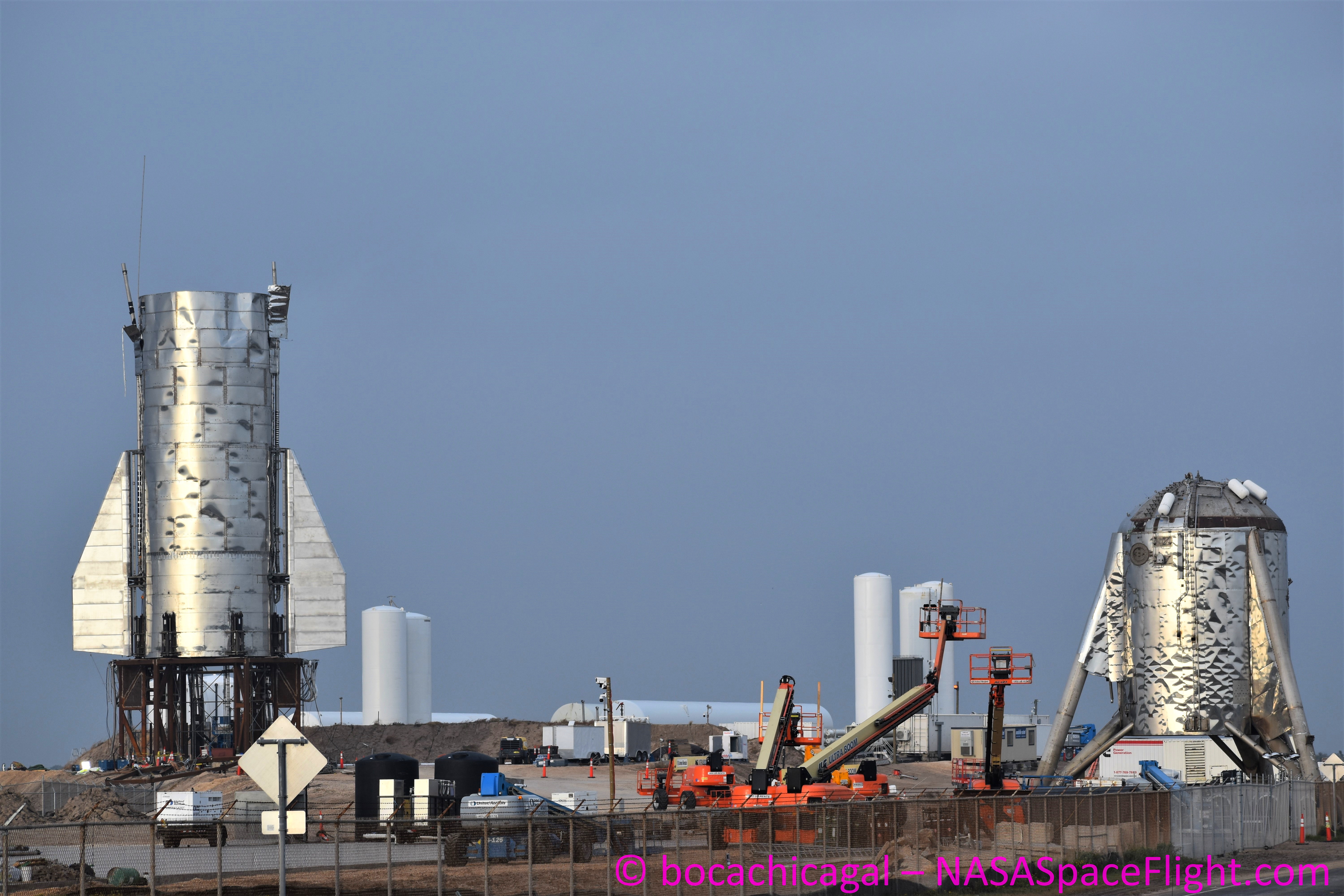 SpaceX is adjusting its Starship plans to expedite development, after the first prototype vehicles – designated Mk1 and Mk2 – proved not to be flightworthy. The company now wants to build the improved Mk3 prototype as quickly as possible, with the hope that it will be able to perform the first Starship flight.

As late as November, SpaceX had been working towards a flight of the Mk1 vehicle to an altitude of approximately 20 kilometers from Boca Chica, Texas. However, the vehicle was eventually deemed not to be flightworthy.

At the time, SpaceX had two competing Starship teams in Cocoa, Fla., and Boca Chica, Texas, respectively. The competition was originally meant to determine which location was better suited for Starship development.

The Florida-based team was building a vehicle similar to Mk1, called Mk2. With the pathfinder nature of both vehicles, SpaceX eventually realized that in order to perform the first flight, they were going to need a more robust vehicle, built with lessons learned from the first two prototypes.

The new vehicle, called Mk3, is already undergoing construction in Boca Chica. It is being built by a unified team, with many of the Florida-based crew members moving to Texas. By building Mk3 with a combined team, SpaceX believes that they can reach the first flight faster.

Consequently, most Starship operations in Florida are currently on hold. Activity at SpaceX’s Cocoa site has ground to a halt for the past several days. Some progress continues to be made to modify Pad 39A at the nearby Kennedy Space Center to support Starship launches, but for how long this will continue remains to be seen.

The first signs of collaboration between Florida and Texas-based teams were seen on Nov. 30, when a Starship bulkhead and other equipment was shipped on to the vessel GO Discovery at Port Canaveral, a short drive from SpaceX’s Cocoa facility in Florida.

I had to make a stop to see GO Discovery with her precious cargo from Cidco Rd. I believe Boca Chica #MK3 is going to have a little bit of Florida inside. Somehow that makes me smile. We may have to wait for a new build here but sharing is caring. Tis the season! #SpaceXFleet pic.twitter.com/p11E3LtKVG

The Starship equipment, which was constructed by the Florida-based team, is being sent to Texas to assist the Mk3 construction.

GO Discovery is currently en route to Boca Chica and is expected to arrive at the nearby Port of Brownsville on or around Dec. 7. The equipment will then be escorted to SpaceX’s Boca Chica launch facility, where Mk3 construction is currently ongoing.

NASASpaceflight.com forum member BocaChicaGal has already spotted Mk3 components being assembled in Texas. These include a bulkhead, a nose cone, and the steel barrels that will be used to construct Mk3’s tank section. 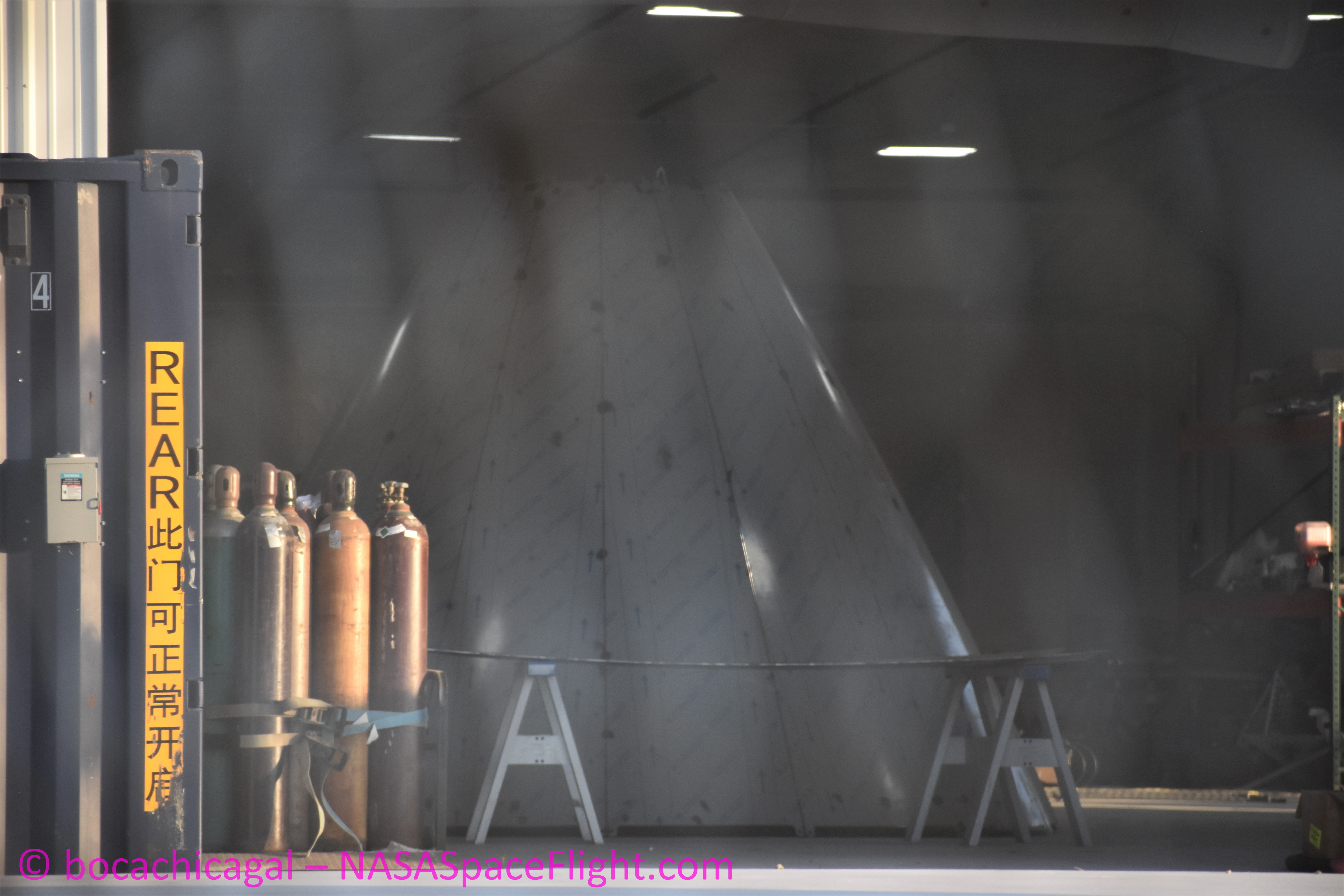 While some small components from Mk1 may be reused for Mk3, it is understood that the large majority of the new prototype will be built from scratch. This includes a brand new nosecone, rather than repurposing the nosecone originally built for Mk1.

The Mk1 nosecone is currently sitting idle on a stand, having never been mated with the Mk1 tank section. The tank section failed during a tank pressurization test with cryogenic liquids. Consequently, the majority of the Mk1 vehicle is expected to be scrapped.

The test occurred on Nov. 20 and resulted in a bulkhead breaking free and flying hundreds of feet into the air. The cryogenic liquids then quickly escaped the vehicle.

Notably, the decisions to not fly Mk1 or Mk2 and to pause the Florida operations both came before Mk1’s failure during the pressurization test. At the time of the anomaly, SpaceX was only hoping to perform up to a static fire with the Mk1 vehicle.

If all had gone to plan with during the tanking tests, three Raptor engines would have been mated with the vehicle, followed by a series of verification tests before the static fire. However, the Nov. 20 failure was the nail in the coffin for any plans to try and perform a static fire with Mk1. All of the focus now is on Mk3.

As for the Mk2 vehicle in Florida, it also will likely never see any engine firings. However, there is a chance that SpaceX could use it for fit-checks and other test-related activities.

The vehicle is currently located at the SpaceX Cocoa facility, but it will likely have to be moved in the near future if SpaceX hopes to use it at a launch site.

Up close and personal at Cidco Road. The team is enjoying a day with family so I got a rare few moments of time to share MK2. Keeping an eye on the site as things have already begun to move and hardware to lay #MK2 down is appearing. Notice the empty bulkhead building? #Starship pic.twitter.com/5t7r3xrlnh

Virgin Trains is currently constructing a new train line through the Cocoa area, and a new bridge will soon block Starship’s transportation path to the nearby Kennedy Space Center.

SpaceX is currently preparing a facility at Roberts Road. inside of KSC, which is expected to eventually take over most, if not all, of the Cocoa operations. This will make transportation to the launch site considerably easier for future Starship builds in Florida.

That being said, it remains unclear when construction of a new Florida-based Starship could begin, with SpaceX now focusing nearly all of its resources in Texas.

Regular updates on the construction of the Starship Mk3 vehicle will be posted on the NASASpaceflight YouTube channel.