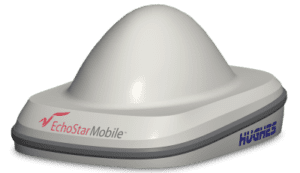 EchoStar Mobile revealed the launch of the new Hughes 4500 S-band terminal to provide connectivity over satellite networks for mobile, land, and maritime network applications. EchoStar Mobile is a subsidiary of EchoStar and a mobile satellite operator providing connectivity across Europe, the North Sea and the Mediterranean through an integrated satellite and terrestrial network.

The Hughes 4500 features an omni-directional antenna and is designed for mobile and fixed operations. The Hughes 4500 is the first S-band terminal in the market featuring low power consumption, ultra-light weight, and a simple installation process.

“This new terminal is unique in terms of its mobile capabilities, power consumption and operational simplicity,” said Anders Johnson, executive director of EchoStar Mobile and president of EchoStar Satellite Services L.L.C. “We are making a significant effort to address the emerging needs of the mobile satellite services market in Europe and surrounding areas. The Hughes 4500 S-band terminal is a cost-effective device ideal for fixed and mobile use on land or for maritime applications. In 2020, we anticipate launching a dual mode variant of the 4500 terminal with integrated 4G LTE connectivity for heterogeneous wireless access to maximize service continuity while minimizing connectivity costs.”