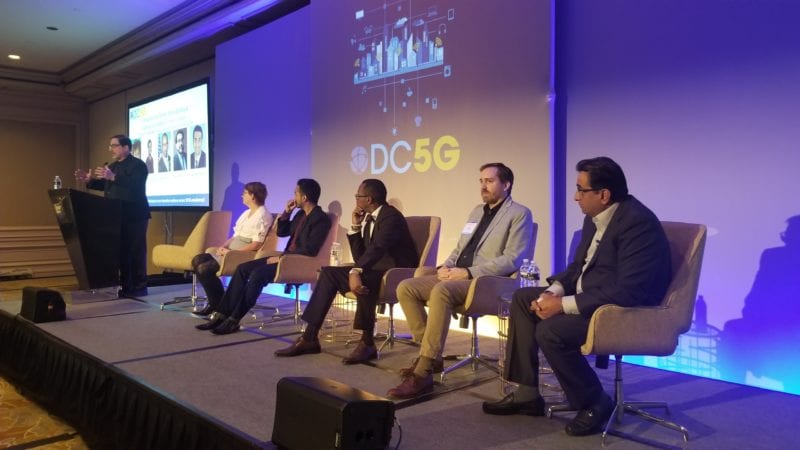 In a world where almost everything is connected to ultra-fast 5G networks, just about everyone is going to need a seat at the table where decisions about those networks are made, according to industry executives, municipal leaders and engineers at DC5G this week.

5G is a collection of technologies and standards which will — over the next decade or so — revolutionize not just cellular telephone services, but mobile computing more generally. New transmission protocols will enable data to move up to an order of magnitude faster than it can over current 4G mobile networks; and software-based or virtualized networks will allow providers to more efficiently slice and dice the connectivity they offer.

“It takes a bunch of partnerships, it takes a lot of players, to get this whole 5G vision off the ground,” added Betsy Covell, an engineer with Nokia who has worked extensively on developing 5G standards. She and Spenrath spoke at a panel titled “Finding Your First Partner.”

Telecom companies like Nokia provide core network equipment, transmission hardware, and in some cases maybe devices as well, “But when we start talking about the applications, the actual uses cases of 5G, that gets beyond what those of us in the telecom industry do,” she said, “That gets into the various verticals, the various industries, the city governments … (that will be the end users of services.) All of those partners need to be working together.”

Even utility companies have a role to play: Power poles are a great site for the more numerous mini-cell towers that 5G will require, compared to current 4G networks.

SES is aiming to work with “both ends” of the value chain, Spenrath explained — the service providers like telecom companies or mobile network operators and the end users like city governments. Their aim is to become “a one-stop shop” for 5G services.

“We’re trying to simplify what 5G looks like as much as possible,” he said.

Partnership was a theme that came up repeatedly during the conference, underlined by case studies like the smart transportation program run by the city government of Alexandria, Va. presented during a session titled “5G Case Studies.”

The City of Alexandria, Virginia’s Transportation Chief Bob Garbacz described how the city was installing license plate reading technology to better enforce parking laws. But that was just the beginning, he said, “Imagine if we could interface with a mobile app like Waze” and use city-owned sensors to tell it where open parking spots were. A partnership with a real time traffic monitoring and navigation app like that could be very powerful, Garbacz said. “Not only could you ask for directions to get somewhere, it could tell you where to park when you got there — and if you’re looking for the lowest rate, maybe it could do that too.”

In Dublin, Ireland, which is piloting 5G networks as part of its Smart Docklands Project, “We have a very collaborative ecosystem,” said Edward Emmanuel, the project’s management lead.

He said the city had used a prior contract with a national research center, Connect, and put them together with telecom wholesaler Dense Air, to pilot 5G. “That gave us the flexibility and the wiggle room to deploy,” he said.

Instead of positioning themselves as a competitor to the telecom providers or mobile network operators, Emmanuel said, the Dublin project sought to “sit within their value chain,” by offering them the chance to leverage a neutral 5G infrastructure installed by the city.

“They were open minded to the idea,” he said. “As long as the economics are right, they are willing to utilize shared infrastructure.”

To make 5G work, he added, end users needed to be “A little bit creative and work collaboratively, engaging academics and industry.”

That creativity was showcased by Eugene Grant, the mayor of Seat Pleasant, Maryland, a small town just outside of Washington, DC., with a population of just over 4,500. Instead of looking at their small size as a negative, the city council sought to see it as a positive, Grant said. “Being small allows me to be more flexible, to be agile, to be nimble, to negotiate.”

“We all know that you want that big contract … you want to go to the big cities,” he said, addressing the service providers in the audience. “But when you go there, look at all the red tape you got to go through, look at all the bureaucracy that you have to deal with.”

“There is a market out there that is being ignored,” he said.

But not by the satellite industry, according to Spenrath. “For us,” he said of SES, “Small towns, small communities a bit off the beaten path are our bread and butter.”

The post The Complex 5G Ecosystem Needs Partnerships to Work appeared first on Via Satellite.