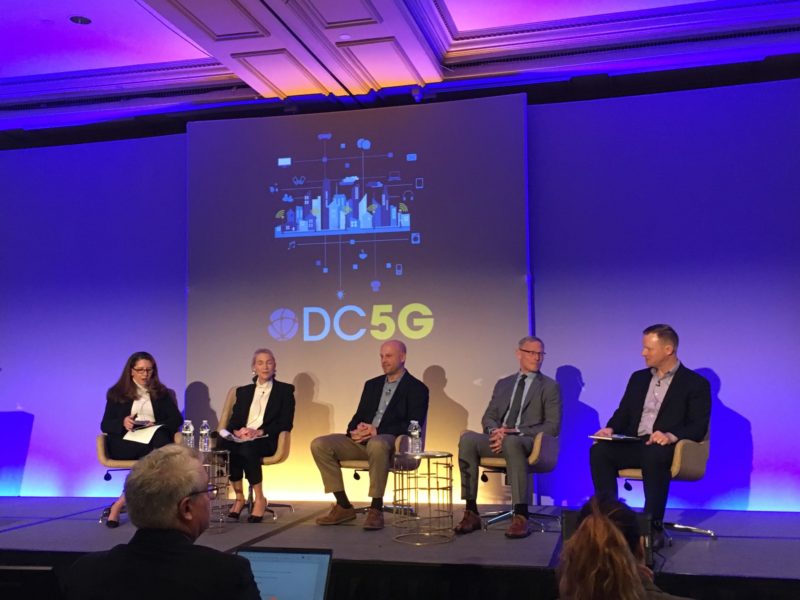 For years, folks have discussed the possibilities of 5G and how the technology will power the fourth industrial revolution in the US. But now it’s time to take action, and everyone from municipal leaders to wireless carriers gathered at DC5G Monday to talk about deploying the technology and putting it to work.

Sprint, one of Verizon’s 5G competitors, has been focusing on establishing private-public partnerships to launch the technology. One of its strongest launches has been with the government of Peachtree Corners, GA, which unveiled a 5G-powered smart city technology proving ground in September. The site includes a 500-acre technology park and a 1.5-mile autonomous test track.

The city has already seen it pay dividends, with the technology park attracting companies like AI firm CloudMinds and Georgia Power, which is developing smart light poles. Making use of the test track for their autonomous vehicle tests are Kia and Local Motors. It should be noted that Peachtree Corners had some help that allowed it to embrace 5G faster than other municipalities. For one, it’s young. The Atlanta suburb was founded just over seven years ago on July 1, 2012.

“It was less than a year ago that we announced our partnership with Sprint… it’s really been since then that we’ve made this happen,” Peachtree Corners city manager Brian Johnson said. “When you’re a new municipality, you don’t have a lot of those legacy costs that some of the old ones have, so we had some advantages.”

Peachtree Corners officials didn’t face much pushback from citizens when moving to create the 5G-powered business park, but the initiative hasn’t been void of challenges. “The big challenge became, and to a degree continues to be, who do you get into the space, how do you fill all of those technology needs so that you don’t have any type of testing that you’re lacking,” Johnson said. The test track has allowed for the testing of package delivery robots and drones, and the sheer number of smart cities devices in the business park makes it a prime location for cybersecurity testing.

“We’ve created the city street of the future… there are now hundreds of breach points that have been created that offer up opportunities for there to be data penetration studies and simulations,” Johnson said. Sprint vp, IoT business development Timothy Johnson said that the Peachtree Corners model in which the government has the funds and support to move forward on its own is only one way to bring 5G to a municipality. Another is where there are private stakeholders within a locality that work together with their government to attract a 5G wireless partner.

“Look around your neighborhood and your city and partner with those folks,” he said. “Say… what can we do together to get the Sprints and the Verizons of the world to come here and deploy this must-have technology for the next 25-30 years because it’s a win for everybody.”

While the Peachtree Corners case study does illustrate ways in which 5G can bring major bucks to a locality, Wall Street is still skeptical that 5G can live up to the intense hype the technology has created over the years. That’s partially because wireless carriers didn’t make much money on 4G compared to their investment.

“We’re entering it with much skepticism as to revenue opportunities and it’s very much a ‘build it and we will come’ scenario,” Wells Fargo managing director Jennifer Fritzsche, said at DC5G Monday. While consumers have heard all about the possibilities of 5G for some time, at the end of the day, Fritzsche believes it will be more of an enterprise product. “If you can go into an enterprise… and say you’re going to save this much money by deploying this, this is something that any CTO will very much listen to and have the ear of both the CEO and CFO in that discussion.”

Fritzsche said Wells Fargo is currently betting on Verizon emerging as the winner amongst carriers investing in 5G infrastructure with its “all-in fiber” approach.

Sara Winegardner is a senior editor at Cablefax. To view more of her work, click here.

The post CFX Tech: The 5G Business Case appeared first on Via Satellite.