A busy 13 hour period for Northrop Grumman (NG) that will see the launch of two NG-built satellites and use of the company’s Pegasus rocket to loft a NASA satellite into orbit is set to kick off Wednesday morning at 06:17 EDT (10:17 UTC) with the launch of a Proton rocket from the Baikonur Cosmodrome in Kazakhstan.

Commercially contracted and managed by International Launch Services (ILS), the mission will use a Proton rocket with a Briz-M upper stage to place both the Eutelsat 5 West B satellite and the Mission Extension Vehicle into a Geostationary Transfer Orbit.

The new satellite for Eutelsat is a joint partnership between Northrop Grumman and Airbus Defence and Space, marking the first time the two organizations have teamed to build a spacecraft.

Eutelsat 5 West B will incorporate a European Geostationary Navigation Overlay Service payload that will augment the U.S. Global Positioning System to improve accuracy and reliability of positioning information.

The satellite’s main purpose will be to serve video markets in Europe and Northern Africa over a 15-year operational life to replace the current Eutelsat 5 West platform.

All told, Eutelsat 5 West B carries a 2,740 kg launch mass and will operate on the GEOStar satellite bus from Northrop Grumman.

After being dropped off in Geostationary Transfer Orbit, the satellite will use its liquid bi-propellant engine to raise its orbit to the Geostationary (GEO) belt.  Once there, it will use its monopropellant hydrazine thrusters to maintain station-keeping operations at the 5 Degrees West Longitude location.

Hitching a ride to orbit with Eutelsat 5 West B is another Northrop Grumman property also built on the GEOStar satellite bus.

The Mission Extension Vehicle, or MEV, is a revolutionary offering from Northrop Grumman designed to increase an already on-orbit GEO satellite’s lifetime by five years or more.

Our MEV-1 and the #NorthropGrumman-built @Eutelsat_SA 5 West B satellite will launch from the Baikonur Cosmodrome aboard an @ILSLaunch Proton Rocket tomorrow at 6:17am ET. Tune in to the ILS website tomorrow at 6:00am ET to watch live! https://t.co/IA3tZIl4cq pic.twitter.com/tFJQ4vC7ke

“This actually began for us in a previous company when we were ATK in the mid-2000s,” said Joe Anderson, Vice President of Business Development and Operation for Space Logistics LLC – a wholly-owned subsidiary of Northrop Grumman – in an interview with NASASpaceflight’s Chris Gebhardt.

“In 2009, we invested in our rendezvous, proximity, and docking laboratory and began developing our own internal concept for this Mission Extension Vehicle.”

But it wasn’t until ATK merged with Orbital Sciences in 2015 – to become Orbital ATK – that the project really took off, with the newly-merged company fully funding the initial development and launch cost of MEV-1 in 2016.

It wasn’t long thereafter that Northrop Grumman struck a deal with Intelsat for the organization to use MEV-1 to extend the operational life of its IS-901 telecommunications satellite.

A year later, Intelsat signed a second contract with Northrop Grumman for a second MEV which is currently under construction for launch in spring of 2020.

In short, the Mission Extension Vehicle is exactly what it sounds like: a semi-autonomous satellite designed to approach still-functioning GEO satellites, dock to them, and provide augmented propulsion operations for satellites running out of fuel.

In the case of the first target, IS-901, this satellite would not be able to function much longer due to depleting propellant reserves.  With MEV-1, it will remain operational for at least five additional years, with Northrop Grumman noting that Intelsat has the option of extending MEV-1’s service to IS-901 for an additional two years beyond the current contracted timeframe.

So how will this work?

The first step is a successful launch and insertion of MEV-1 into Geostationary Transfer Orbit (GTO) by the Proton rocket and its Briz-M upper stage. 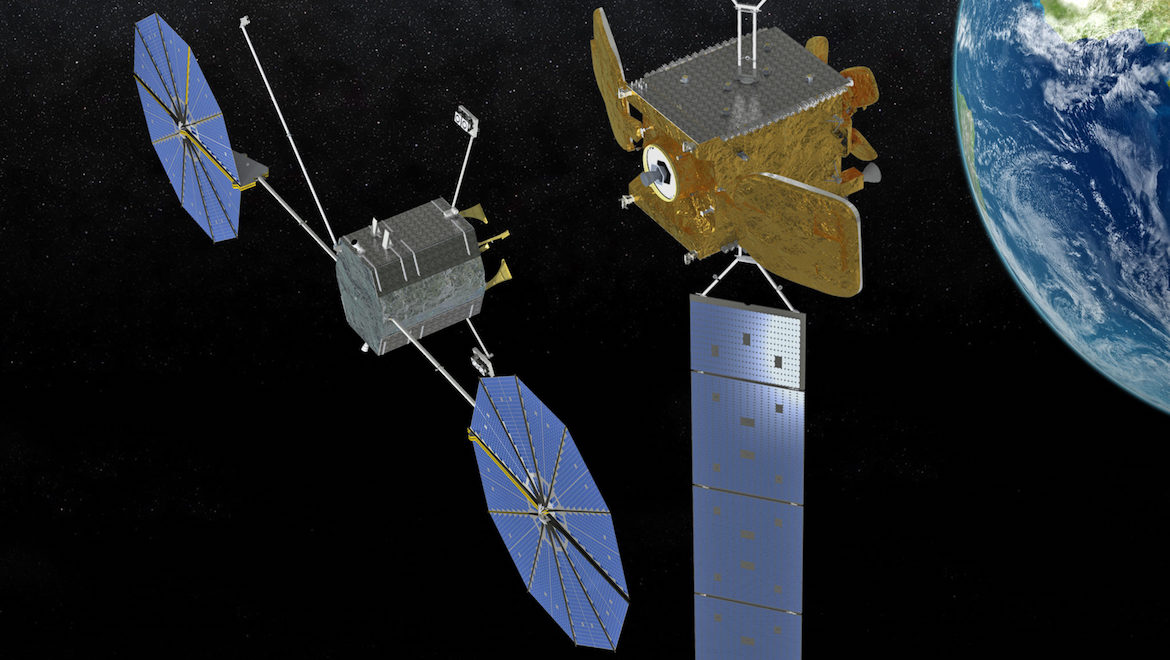 GTO is a highly elliptical orbit that peaks near Geostationary Orbit altitude of 35,786 km while descending down to just a few hundred kilometers in altitude above Earth.

After being dropped off in this orbit, MEV-1 will use it solar electric propulsion thrusters to gradually boost its orbit up to full circular GEO altitude over the course of three to three-and-a-half months.

While MEV-1 is raising its orbit, the IS-901 satellite will be taken out of service by Intelsat and gradually be commanded to raise its orbit 300 km above GEO altitude to roughly 36,100 km to an area known as the GEO graveyard.

The GEO graveyard is the place where GEO satellites, just before the end of their lifetimes, are raised into to get them out of the operational GEO belt.  The graveyard is a stable orbit location that does not noticeably degrade due to atmospheric drag from Earth.

Once IS-901 is in its graveyard orbit and MEV-1 has finished raising its altitude up to that level, MEV will undergo a series of final checks before being commanded to approach IS-901.

As related by Mr. Anderson, during approach, the MEV will use a fleet of visual imagers, infrared cameras, and side scanning LIDAR to maintain complete awareness of its orientation and position relative to the IS-901 satellite.

After initially approaching to 80 m, MEV-1 will initiate an autonomous hold while ground controllers verify all systems are ready to press to the next waypoint or hold location at 20 m.

After receiving the command from the ground to proceed, MEV-1 will autonomously fly itself to the 20 m hold point before waiting again for ground controllers to ensure all is ready on both sides for the final press to the 1 m docking location.

Once MEV-1 is 1 m from IS-901, it will initiate station-keeping operations, holding itself rock-solid before reaching out with a docking probe arm that will enter the nozzle of the liquid apogee engine on IS-901.

The docking probe will then grab the liquid apogee engine from the inside and pull IS-901 down onto three stanchions on MEV-1 that will provide rigid support between the two craft, essentially making them a single spacecraft.

This will mark the first-ever known docking in the GEO belt and the first time Northrop Grumman performs a docking.

Once attached, MEV-1 will provide all of the propulsion requirements for IS-901.

After completion of its five-year extended mission, MEV-1 will raise IS-901 back up into a GEO graveyard orbit and release it there before backing away and moving on to its next mission extension target satellite.

All told, MEV-1 carries enough fuel for a minimum 15-year lifetime in the GEO belt, giving it the option to perform up to three five-year mission extension operations for three different GEO satellites if needed or requested.