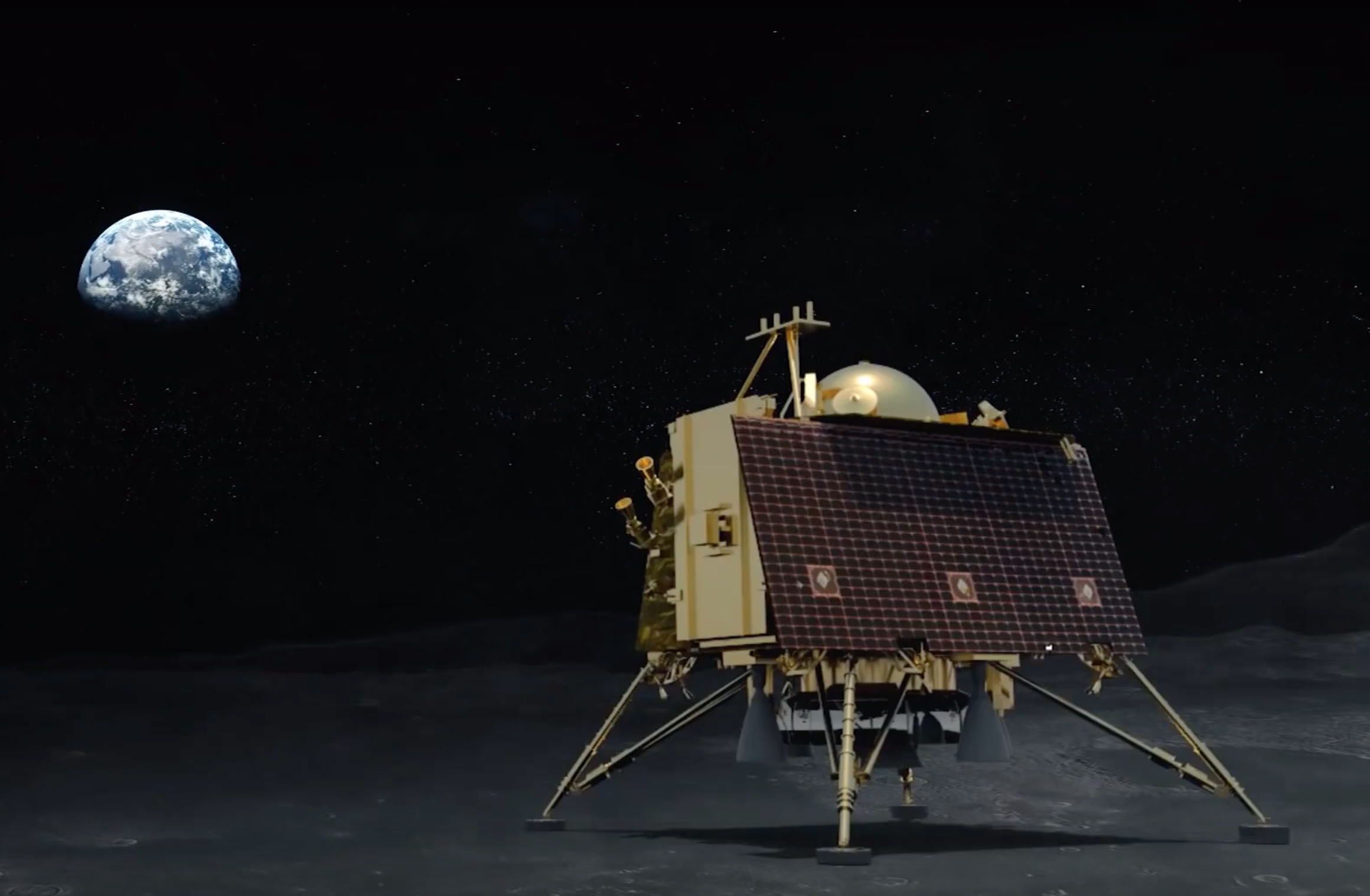 Following a historic July 22 launch on a GSLV Mk-III rocket from the east coast of India, the Chandrayaan-2 spacecraft – the robotic lander and rover, specifically – is now set to attempt a soft landing on the surface of the Moon no earlier than Friday evening between 8 and 9 p.m. UTC.

If the landing is indeed successful, India will become only the fourth nation to safely land a spacecraft on the Moon, behind the Soviet Union, the United States, and China.

The Chandrayaan-2 mission serves as the second phase of ISRO’s Chandrayaan lunar exploration program and is a follow-on to the highly successful Chandrayaan-1 mission, which featured a lunar orbiter and an impactor known as the Moon Impact Probe (MIP).

Both spacecraft were launched aboard a Polar Satellite Launch Vehicle (PSLV) on October 22, 2008, and achieved 95% of the planned mission goals – including the discovery of water ice at the lunar South Pole after the MIP’s crash-landing near the Shackleton crater on November 14 of that year.

Chandrayaan-2 employs a group of three spacecraft that will orbit, land on, and rove the lunar surface – the unnamed Orbiter, the Vikram lander, and the small Pragyan rover. Combined, the three mission elements weighed in at 3,850 kilograms (8,488 pounds) at liftoff.

The mission was originally slated to launch sometime in 2011 as a joint effort between ISRO and the Russian Space Agency, Roscosmos. However, numerous delays and financial troubles pushed the launch back by nearly 4 years to 2015 and ultimately led to the Russian withdrawal from the program.

ISRO then decided to carry on with the mission independently. As such, the launch was once again rescheduled for no earlier than March of 2018, but was delayed even further to April and October of that same year, and eventually moved into the “first half of 2019”.

Another pushback to July 2019 followed as a result of minor damage to two of the lander’s legs sustained during pre-flight testing. Chandrayaan-2 eventually launched on July 22 on a Geosynchronous Satellite Launch Vehicle Mark III (GSLV Mk-III) from the Second Pad at India’s Satish Dhawan Space Centre.

LAUNCH! ISRO GSLV MkIII has launched with the Chandrayaan-2 mission to land on the Moon!

Following the successful launch, Chandrayaan-2 began performing a series of 6 apogee-raising burns with the Orbiter’s main engine to propel it farther away from Earth and closer to the Moon. These burns took place over 23 days, with the final burn serving as the Trans-Lunar Injection (TLI) maneuver that officially placed Chandrayaan-2 on course with a Moon encounter.

Four more burns were performed over the following 13 days to lower Chandrayaan-2’s orbit to an altitude of 119 x 127 kilometers (74 x 79 miles). The last of these burns occurred on Sunday, September 1.

Take a look at the first Moon image captured by #Chandrayaan2 #VikramLander taken at a height of about 2650 km from Lunar surface on August 21, 2019.

Mare Orientale basin and Apollo craters are identified in the picture.#ISRO pic.twitter.com/ZEoLnSlATQ

The Vikram lander and Pragyan rover then separated from the Orbiter the next day and subsequently began to lower its orbit even further by conducting 2 deorbit burns using the Lander’s onboard propulsion system. The first burn was completed on Tuesday, September 3, followed by the second on Wednesday the 4th.

If everything goes according to plan from here, the Vikram lander will softly touch down about 350 kilometers (218 miles) away from the South Pole-Aitken Basin rim on Friday evening.

Vikram – named after Dr. Vikram A. Sarabhai, who is regarded as the founder of the Indian space program – is outfitted with eight 50 N (11 lbf) attitude control thrusters and five 800 N (180 lbf) liquid-fueled main engines for the descent and landing. The spacecraft also carries several cameras to assist with imaging, navigation, and hazard avoidance during the descent.

Vikram also hosts an altimeter, a velocity meter, and the necessary software to accommodate these components. All of these systems will allow Vikram to safely land on slopes of up to 12 degrees, with a touchdown velocity of just 2 meters per second (6.5 feet per second).

Several scientific payloads are also present on Vikram, such as the Radio Anatomy of Moon Bound Hypersensitive Ionosphere and Atmosphere Instrument, Chandra’s Surface Thermophysical Experiment, and the Instrument for Lunar Seismic Activity. A laser retroreflector array (used for taking accurate measurements of the distance between the surface-bound reflector and satellites in lunar orbit) was also provided as a passive experiment by NASA’s Goddard Space Flight Center.

Once Vikram has landed, a command will be sent to open a small door located on the side of the lander and extend it down to the lunar surface, thereby providing a ramp for the Pragyan rover.

Pragyan – meaning “wisdom” in Sanskrit – will roll down the ramp to the surface upon the extension of the rover’s single solar panel and the activation of its onboard batteries. 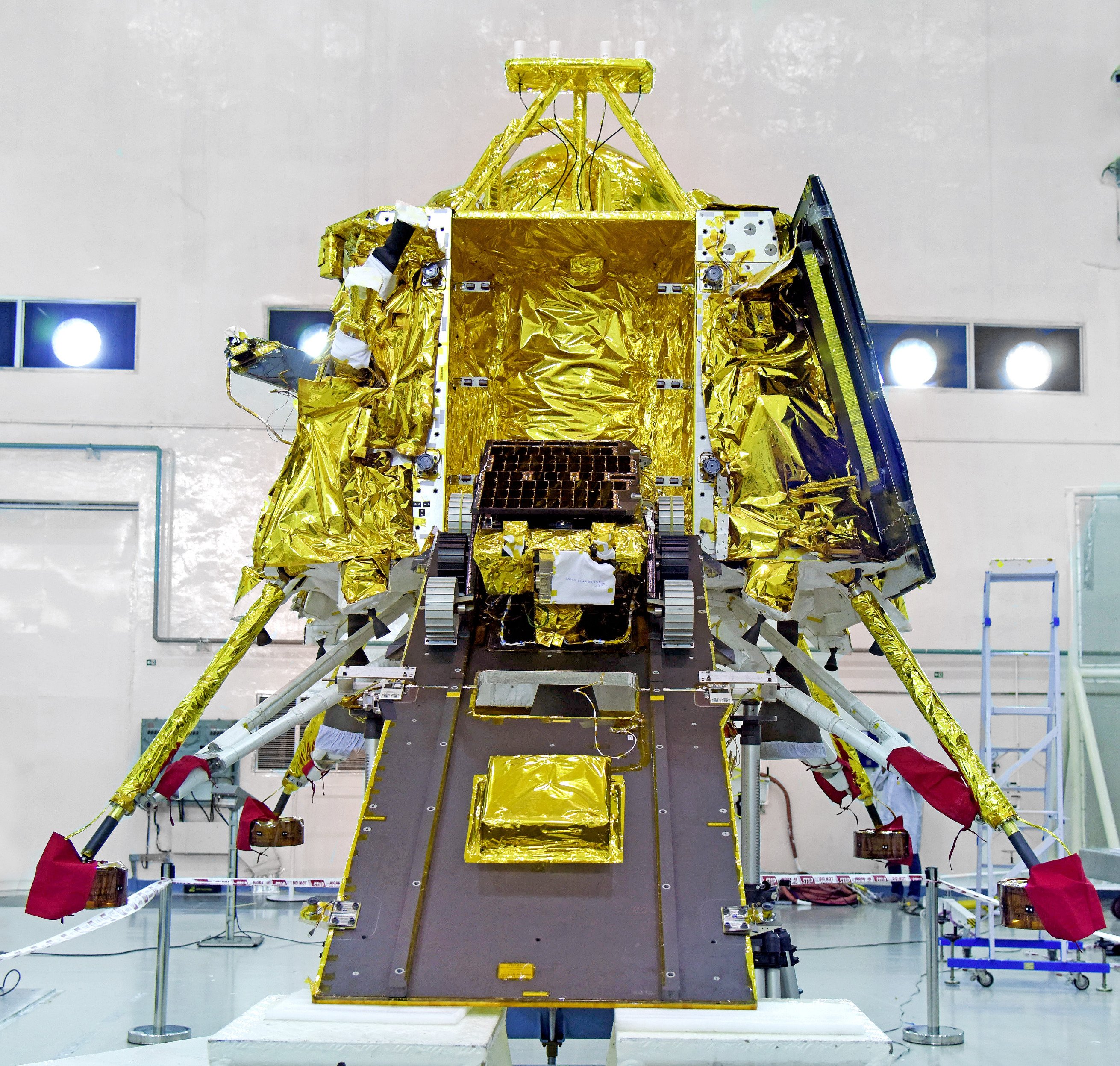 Vikram lander and Pragyan rover in ISRO cleanroom prior to launch – credit: ISRO

Pragyan can travel up to half a kilometer (1,640 feet) at a maximum speed of 1 centimeter per second (0.03 feet per second) and is carrying two science experiments: the Alpha Particle X-ray Spectrometer and the Laser-Induced Breakdown Spectroscope.

Both Vikram and Pragyan are designed to function for a single lunar day, which equates to around 14 Earth days. The lander serves as a communications relay between the Pragyan rover and the Orbiter, which directly communicates with the Indian Deep Space Network located in Bayalalu, India.

The Orbiter will mainly function as a science platform in its own right, as it features eight science experiments in total: the Chandrayaan-2 Large Area Soft X-ray Spectrometer, the Terrain Mapping Camera 2, the Solar X-ray Monitor, the Imaging IR Spectrometer, Dual Frequency Synthetic Aperture Radar, the Orbiter High-Resolution Camera, the Chandrayaan-2 Atmospheric Explorer 2, and the Dual Frequency Radio Science payload.

It has been reported that the Orbiter has performed an unannounced maneuver to place itself in a 96 x 125 kilometer (59 x 77 mile) orbit, which would allow it to pass directly above the Vikram lander as the landing occurs. This could have been done to photograph the landing from above, or is instead part of a redundancy measure to provide an extra means of communication with Vikram in case of a loss of signal.