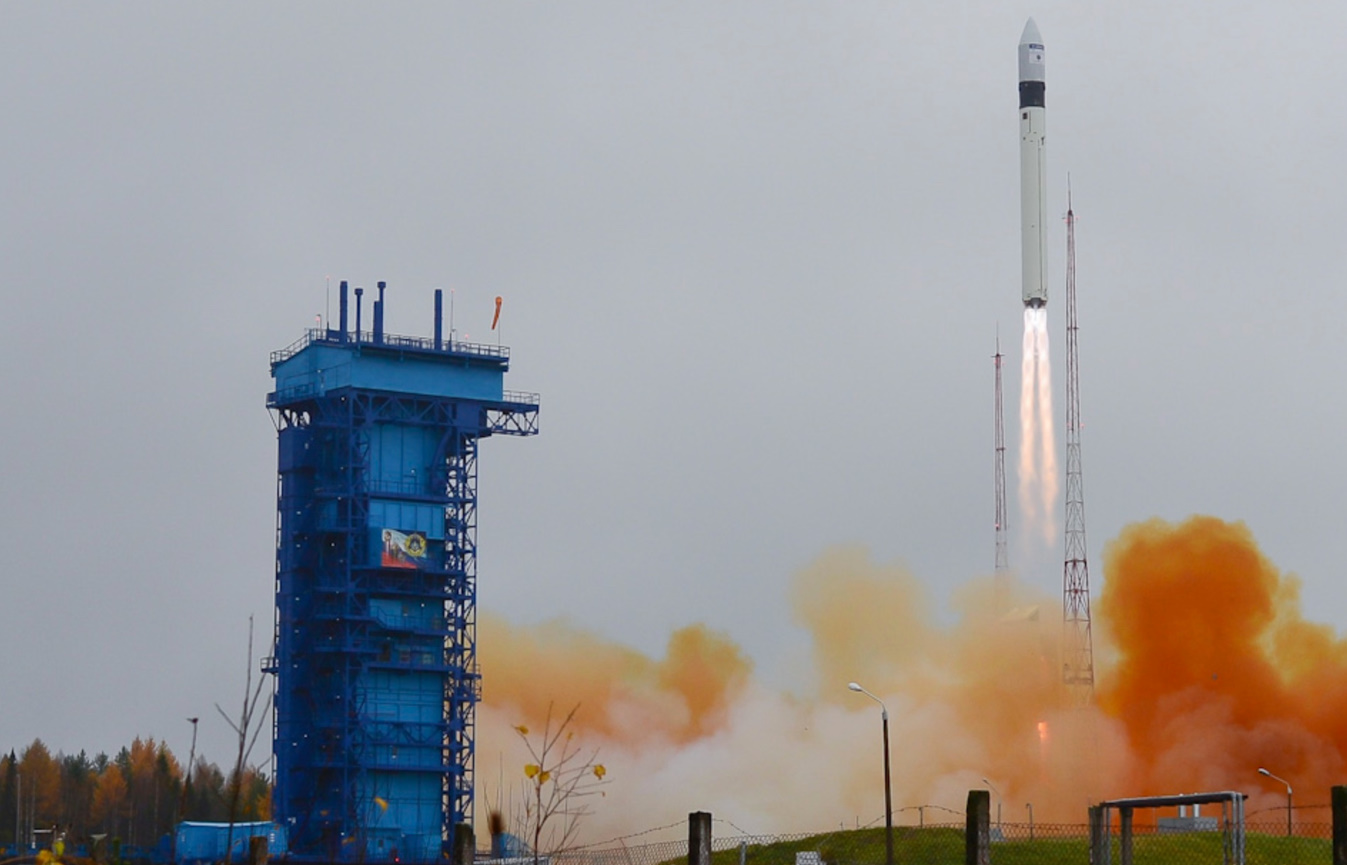 Russia’s Rokot rocket has deployed a military satellite that will help refine models of Earth’s gravitational field. The Geo-IK-2 No.13L satellite lifted off from the Plesetsk Cosmodrome at 17:00:14 Moscow Time (14:00 UTC) Friday, separating from its carrier rocket less than two hours later.

Geodesy – the study of Earth’s shape and gravitational field – is one of many sciences that underpin humanity’s use of space for both peaceful and military purposes. Accurate models of the planet’s physical parameters and surrounding gravitational forces are vital to determining accurate positions on the surface and planning trajectories for orbital and suborbital spaceflight. For a nation’s military, such a model can serve a multitude of applications, including improved targeting of weapons and predicting the flight paths of missiles.

To keep its models of the planet’s gravitational field up to date, Russia operates a fleet of geodesy satellites. The current Geo-IK-2 series is the third generation of spacecraft that it has used for this purpose, following on from the earlier Geoid-Sfera and Geo-IK, or Musson, series. Geo-IK-2, also known as Musson-2, was conceived as a pair of spacecraft that would provide complementary data. A third satellite – which has been deployed by Friday’s launch – was ordered after the first satellite failed in orbit.

The original Sfera satellites were drum-shaped spacecraft equipped with radio and light transmitters which allowed their position and velocity to be measured. Eighteen were launched aboard Kosmos-3M rockets between February 1968 and December 1978, before their replacement by the more sophisticated Geo-IK series. These added a radar altimeter to determine the satellite’s height above the surface and retroreflectors to aid in orbit determination. Fourteen were launched from January 1981 to November 1994 using Tsyklon-3 rockets.

A new series of satellites were due to begin launching in the mid-1990s, however, this was canceled after the fall of the Soviet Union. Instead, it would not be until February 2011 that the first Geo-IK-2 satellite would fly. Geo-IK-2 No.11L, known after launch as Kosmos 2470, was carried to orbit aboard a Rokot vehicle with a Briz-KM upper stage – the same type rocket that performed Friday’s mission.

During the 2011 launch, the Briz-KM suffered a loss of control at the beginning of its second planned engine burn which resulted in an emergency cutoff and the stranding of its payload in a transfer orbit from where it could not complete its mission. Subsequent communications problems limited efforts to use the satellite as a testbed for future missions, although engineers were able to validate some of its systems on orbit. Kosmos 2470 decayed from orbit in July 2013.

The second Geo-IK-2, No.12L, was launched in June 2016 and entered orbit successfully as Kosmos 2517. With Geo-IK No.13L joining it in orbit following Friday’s launch, Russia’s satellite geodesy program will return to full strength for the first time since the 1990s. Now that it is on orbit, Geo-IK No.13L is expected to be renamed Kosmos 2540 under a series of designations for military spacecraft of Russia and formerly the Soviet Union that was first used in 1962.

Geo-IK-2 No.13L will operate in an orbit about 1,000 kilometers (620 miles, 540 nautical miles) above the Earth, high enough to minimize atmospheric drag so any changes in the spacecraft’s altitude or velocity can be attributed solely to gravitational fluctuations. Built by ISS Reshetnev it is three-axis stabilized with solar arrays to generate power. The principal instrument aboard the spacecraft is SADKO-3, a radar altimeter developed by France’s Thales Alenia Space. It follows the SADKO-1 and 2 instruments flown aboard the two previous Geo-IK-2 satellites.

SADKO-3 allows Geo-IK-2 No.13L to record precise measurements of the distance to the Earth’s surface, so any changes in its orbit can be tracked. The satellite is also fitted with retroreflectors for ground-based orbit-determination and satellite navigation receivers that will use GLONASS and American GPS satellites to get a fix on the spacecraft’s location.

In addition to its role supporting Russia’s military, Geo-IK-2 No.13L will provide data to assist in Earth science research, helping with studies of tides, polar ice levels, plate tectonics and the Earth’s rotation.

The Rokot vehicle that performed Friday’s launch was converted from a decommissioned ballistic missile. The Rokot program was initiated to make use of UR-100N missiles (codenamed the SS-19 Stiletto by NATO) as they were withdrawn under the START-I arms control treaty. 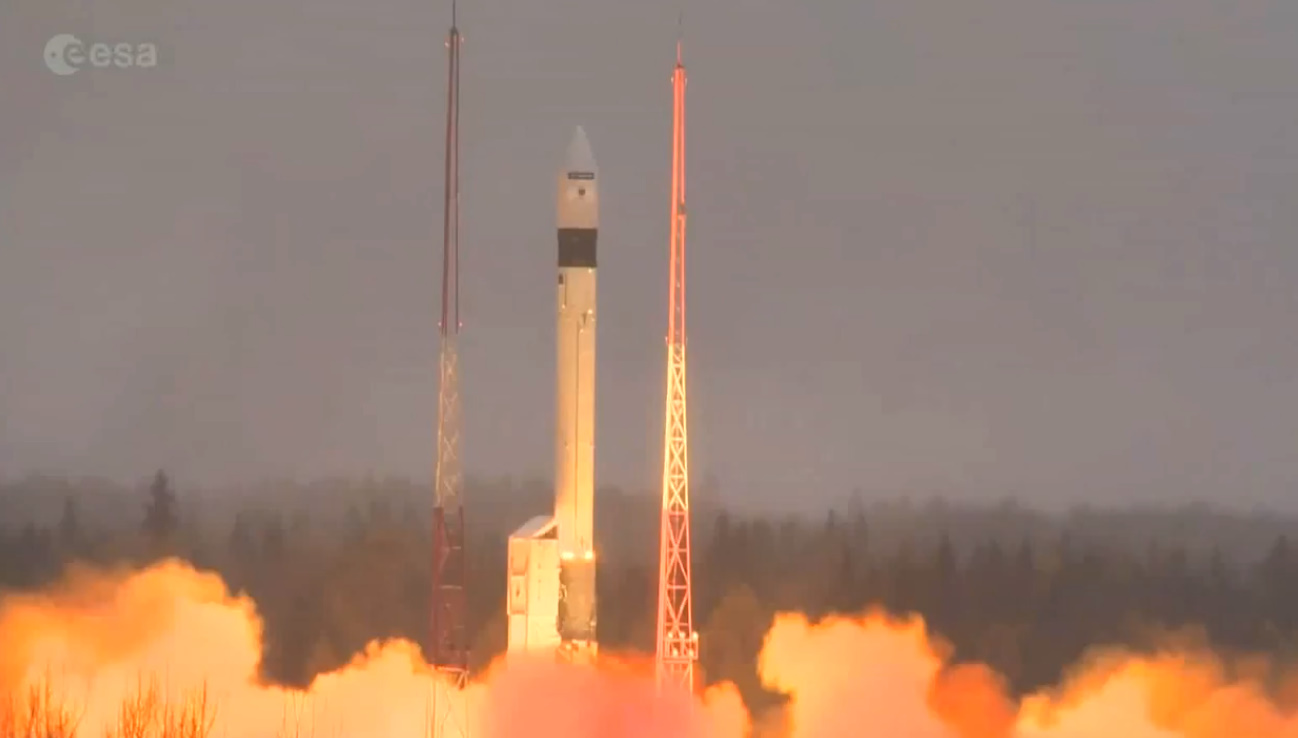 Rokot on a launch for ESA

Three initial Rokot/Briz-K test vehicles were launched from silos at Baikonur in the early 1990s, with operational Rokot/Briz-KM launches from a surface pad at the Plesetsk Cosmodrome beginning with the launch of two mass simulator mockups of Iridium communications satellites in May 2000. Thursday’s launch is the thirtieth of the Rokot/Briz-KM configuration and its twenty-seventh successful mission.

Although the Rokot is converted from existing missiles, and this work is conducted in Russia, it relies on parts from Ukraine for its guidance system. Due to the political fallout from Russia’s 2014 annexation of the Crimean peninsula and its continuing military actions in eastern Ukraine, the supply of these components has dried up.

Following Friday’s launch, two more Rokots remain available to fly before the type is replaced by the Soyuz-2-1v and Angara. An upgraded Rokot-2 design is also under consideration, using the same design and stockpile of retired missiles as the current Rokot in conjunction with Russian-developed guidance systems.

Rokot launched from Site 133/3 at the Plesetsk Cosmodrome. This was originally built as Site 133/1 and codenamed Raduga – Rainbow – serving the Kosmos-2I rocket from 1967 until 1977. It returned to service in 1985 as an additional launch pad for the Kosmos-3M rocket, complementing two existing pads at the nearby Site 132.

It was at this time the facility was renumbered to Pad 3. Kosmos-3M launches from Site 133 ended in 1994 and the pad was rebuilt for Rokot ahead of its first surface launch in 2000.

Plans originally called for the complex to host a Rokot/Briz-K launch in 1999 before the operational version of Rokot came online, however, this was canceled after an accident during prelaunch testing which saw the rocket’s payload fairing separate while it was still standing on the launch pad. The resulting damage left the rocket unable to fly, and the first Rokot launch from Plesetsk would instead by the first flight with Briz-KM the next year.

The first two stages of Rokot were stacked vertically at the launch pad using a mobile service tower, while the Briz-KM upper stage, spacecraft and payload fairing were integrated into an upper composite or “space head” before transport to the launch pad where they join the rocket. Rokot remained enclosed within its service tower until the final minutes of Friday’s countdown, with the tower moving away from the rocket about nine minutes before the planned liftoff.

Rokot’s first two stages were taken from the UR-100N. Both burn storable hypergolic propellant – unsymmetrical dimethylhydrazine (UDMH) and dinitrogen tetroxide. The first stage was powered by an RD-0233 engine which ignited seconds before liftoff and burned for about two minutes.

The verniers continued to burn alongside the main engine, providing attitude control while the main engine contributed the thrust to take Rokot towards orbit. About a minute into the second stage burn Rokot’s payload fairing separated from the nose of the rocket, exposing Geo-IK-2 No.13L to space for the first time.

After Rokot’s second stage burned out and separated, the Briz-KM took over to inject its payload into orbit. Briz-KM was purpose-built for Rokot, sharing a common design with the core propulsion module of the larger Briz-M that flies on Proton rocket, without the additional propellant drop tank flown on Briz-M. 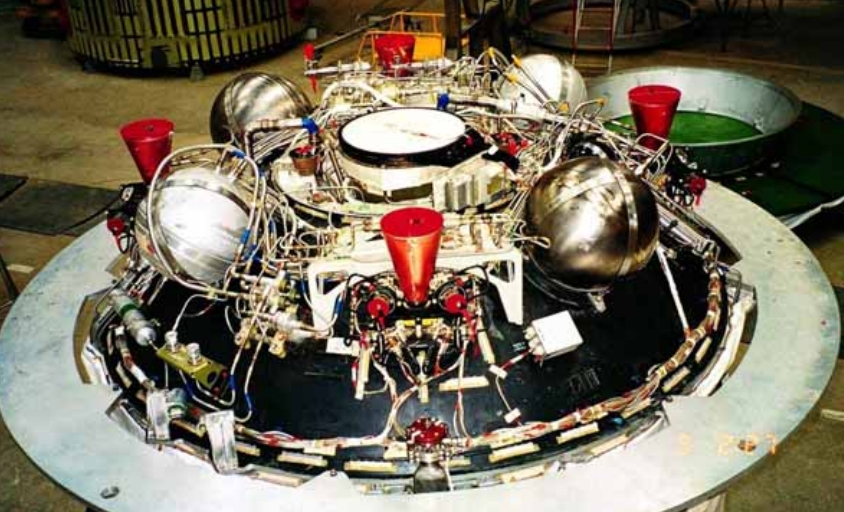 Like the lower stages of the Rokot, Briz-KM burned UDMH propellant and dinitrogen tetroxide with its S5.92 engine able to be restarted in flight for a series of burns. The stage made two burns to deploy Geo-IK-2, followed by a third after spacecraft separation.

The first Briz-KM burn would have begun seconds after its separation from the second stage, lasting nine to ten minutes as it established itself in an initial transfer orbit. After a coast phase – likely lasting around seventy minutes – Briz restarted for a shorter burn that circularised its orbit, raising the perigee – or lowest point – ahead of spacecraft separation. After releasing Geo-IK-2 No.13L, Briz-KM would have fired its engine again to lower its orbit.

Following Friday’s launch Rokot is expected to fly again later this year with a trio of Gonets-M communications satellites. That launch had been queued behind Friday’s mission as the rocket was designated as a backup for the higher-priority Geo-IK mission, however with the geodesy satellite now in orbit it is no longer required in this role. One further launch, likely carrying Rodnik military communications spacecraft, is also expected in the near future.