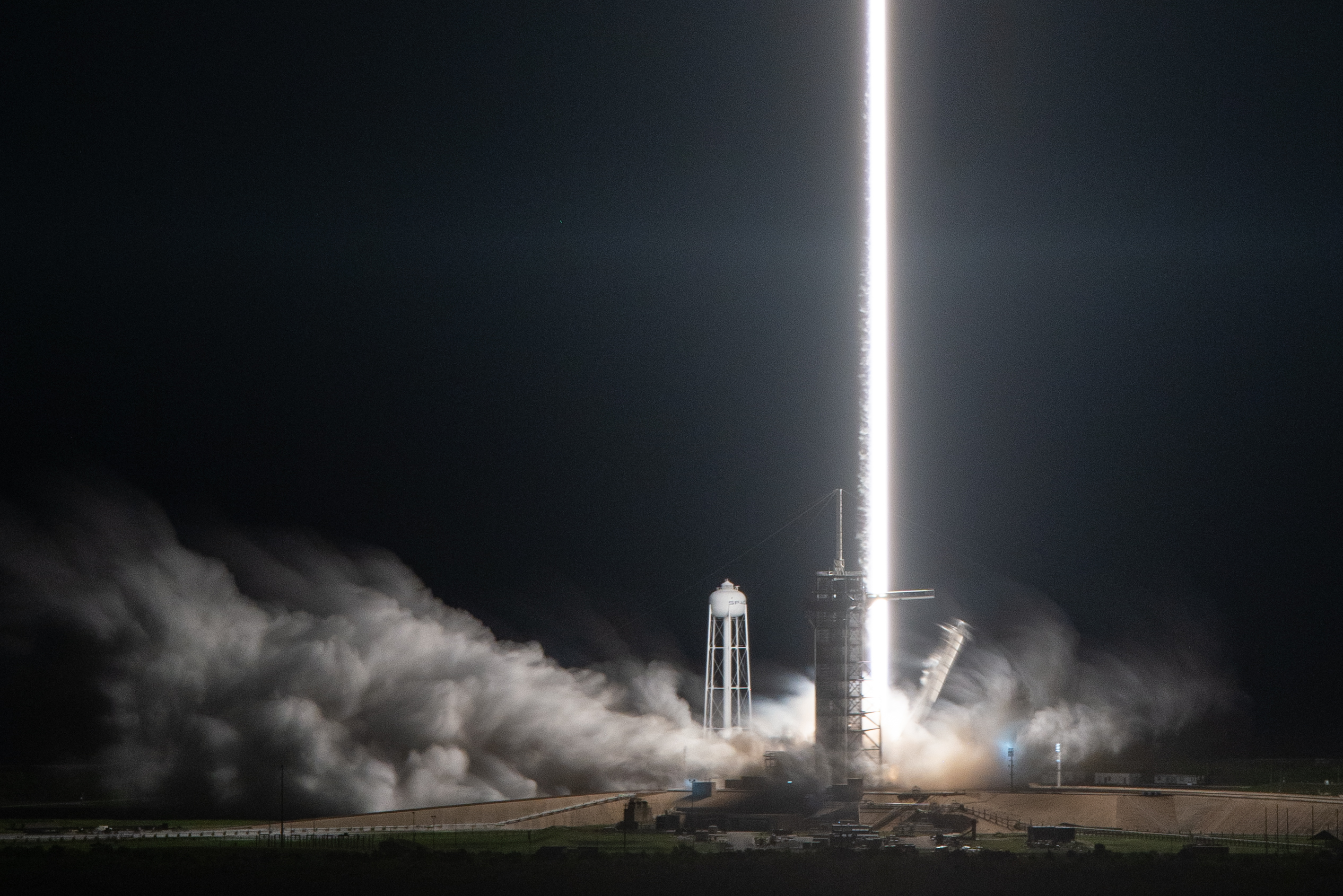 SpaceX is busy on all fronts, from its bread and butter commercial satellite launches to planning its ultimate future of deep space transportation and multi-planetary colonization. A second static fire test was ordered for Falcon 9 B1047.3 ahead of next week’s AMOS-17 launch, while a key environmental report shed new details on the company’s plans for a Starship launch pad at its Kennedy Space Center (KSC) 39A complex.

This mission was set to launch on Saturday, with the required Static Fire test taking place in time to support the schedule.

However, following Wednesday’s hot-fire test of the booster’s nine Merlin 1D engines, SpaceX’s customary confirmation of a good test following its “Quick Look” review hinted an item of interest being observed in the test data.

“Static fire test of Falcon 9 complete and team is assessing data – targeting August 3 for the launch of AMOS-17 from Pad 40 in Florida,” noted the SpaceX tweet, which didn’t point to anything dramatic given it confirmed it was still targetting a Saturday launch.

It is believed the item of interest related to an observation in the Second Stage, which matched SpaceX’s continued confidence in making Saturday’s launch date per the ability to resolve numerous issues on the vehicle both at the pad or when rolled back inside the Horizontal Integration Facility (HIF) for payload integration.

Confidence in Saturday’s launch date continued as the SpaceX Fleet headed out into the Atlantic. While there won’t be a booster recovery, SpaceX will be attempting another fairing catch via Ms. Tree (formerly Mr. Steven).

However, the fleet turned back to the coast during Thursday, pointing to a potential delay in the schedule while KSC/Cape notices to the workforce noted a new “Cape Support Critical Period” for an August 5 launch date (L2). Cape workers then noted there were preparations taking place for a second Static Fire test.

SpaceX then confirmed the requirement for a second test and a delayed launch – without providing a confirmed date – pointing to the need to replace a valve, understood to be related to a system associated with the Merlin 1D engines.

Team is setting up an additional static fire test of Falcon 9 after replacing a suspect valve. Will confirm updated target launch date for AMOS-17 once complete.

The second static fire test is expected on Friday, albeit late at night – or potentially early on Saturday – due to poor weather in the region.

Even with the slight delay, the record turnaround of SLC-40 has been highly impressive, having only just hosted the launch of a Falcon 9 with the CRS-18 Dragon mission to the ISS on July 25.

This turnaround ability – from launch, pad safing, to what is known as the “Shakedown” report on Pad system health, to allowing for the next rocket to take up residency – will bode well for SpaceX’s future manifest.

Following the launch of AMOS-17, SpaceX is expected to conduct two launches of its Starlink constellation in quick succession.

After the company successfully lofted its first batch of 60 Starlink internet satellites for its under-construction constellation, SpaceX is set to loft two more missions this year, currently targetting October 17 and November 4 respectively (L2).

The launch of GPS III-3 and the CRS-19 Dragon are both scheduled to occur before the end of the year, along with the swansong for Falcon 9 B1046.4, which is currently tracking a November 11 (L2) launch on the key In-Flight Abort (IFA) test.

The IFA test – as envisioned by Mack Crawford for NSF/L2

This test is required ahead of SpaceX’s DM-2 mission with its Dragon 2 crew vehicle, the follow-on mission to DM-1 this time with a crew riding to the ISS.

Although DM-2 has been sat in a December 17 placeholder for over a month, a firm date won’t be known until the conclusion of the failure investigation into the abort thruster anomaly that destroyed the DM-1 Dragon 2 in April.

Launch in December is still possible – though unlikely – should SpaceX successfully negotiate the milestones and gain the green light from NASA to conduct the DM-2 test flight; however, the launch date will continue to be reviewed monthly by the partners.

Meanwhile, a key milestone was achieved this week when the booster that will be tasked with the DM-2 mission, B1058.1, arrived at the McGregor test site from the factory in Hawthorne, California.

Regardless of the DM-2 mission in late-2019 or early-2020, SpaceX’s launch cadence is going to ramp up in a big way next year.

SpaceX launches of its Starlink system will be a major part of its 2020 schedule, making up around seven of what is currently scheduled to be 14 launches within the first six months of the year, as outlined in the Eastern Range Long Range Forecast.

While SpaceX moves through its launch manifest, work on its next-generation Starship system is continuing.

A successful hop of the Starhopper test vehicle was conducted last month, paving the way for a more ambitious 200-meter hop on August 12. As of Friday, this date remains on track, with a daylight hop planned.

Hopper will again hop under the power of its SN6 Raptor, with the production of new Raptors moving ahead at pace in Hawthorne. The SN7 Raptor is already on the McGregor test stand, although it is currently not believed to be assigned to any related Starship vehicle.

SN8 through SN13 – pending successful testing as they travel through the McGregor test stand – are expected to be the six engines that will be installed on two prototype Starship vehicles that continue construction at Boca Chica in Texas and Cocoa in Florida. 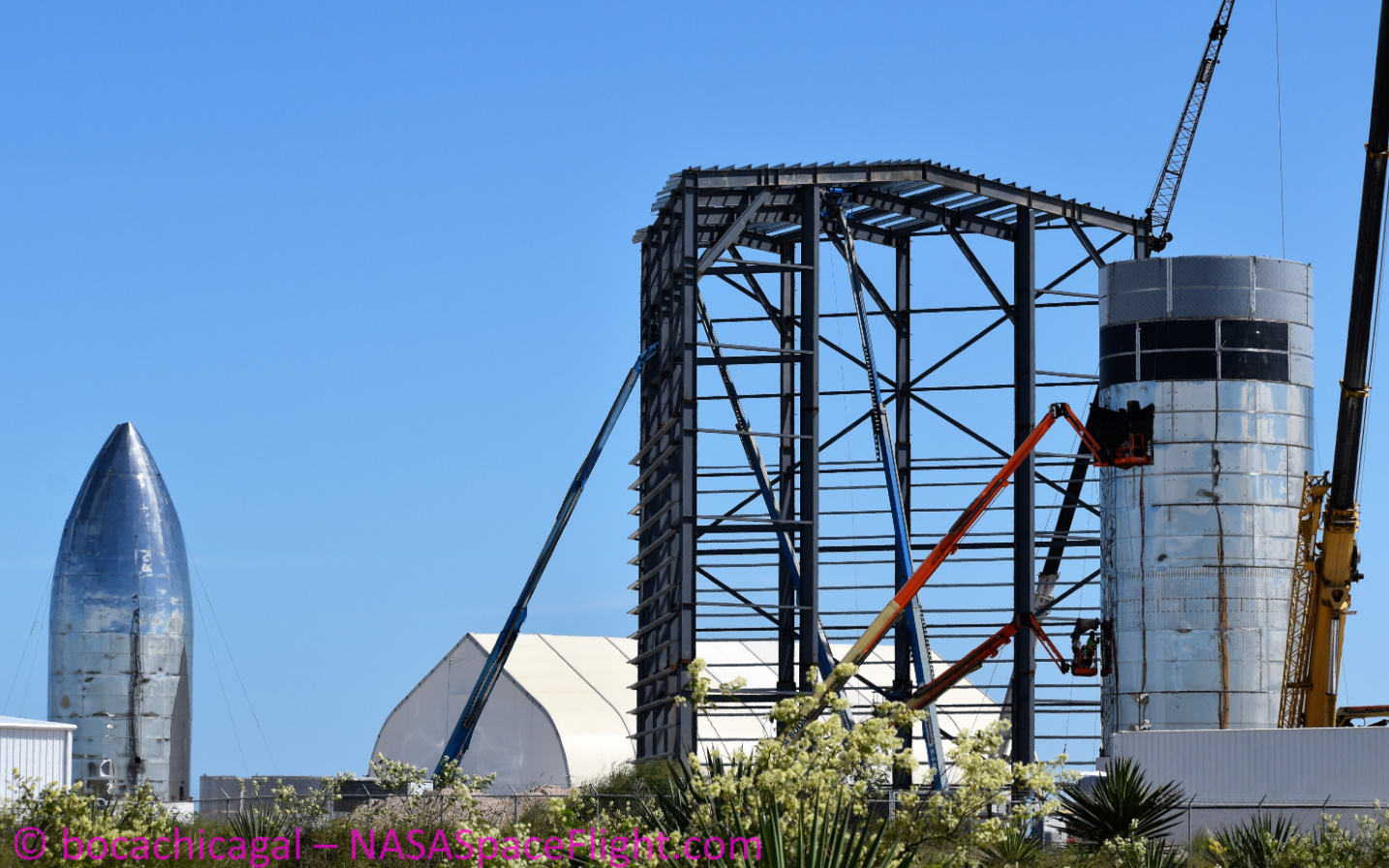 Construction of the two prototype vehicles is at a similar stage at both sites, although progress has been easier to follow at the Boca Chica site, with bulkhead installation the latest milestone.

The large fairings will be added to the stacks in the near future, which will provide a true perspective on the size of these test vehicles.

As previously reported by this site, Starship will first launch from Kennedy Space Center’s 39A, which is under a long-term lease by SpaceX.

The pad for Starship will be located off-ramp allowing – as expected – continued use of 39A by Falcon 9 and Falcon Heavy. A large amount of information was updated in the Draft Environmental Assessment for the SpaceX Starship/Super Heavy at KSC.

"Draft Environmental Assessment for the SpaceX Starship and Super Heavy Launch Vehicle at Kennedy Space Center (KSC) – https://t.co/V7WLi7H2Qt – heck of a long read, but as we reported (https://t.co/SEUXYQszFR), Starship Pad 'off ramp' on 39A. " pic.twitter.com/FrRiLvcrAs

In what appears to be a positive overview of the environmental impacts, thus allowing SpaceX to proceed with the 39A complex modifications, the report noted that SpaceX plans to launch the Starship/Super Heavy up to 24 times per year from LC-39A. A static fire test would be conducted on each stage before each launch, it added.

The report also notes that initial Starship landings will be at LZ-1, although plans for a pad inside the 39A perimeter are shown, including on another document that was acquired by this site (L2). 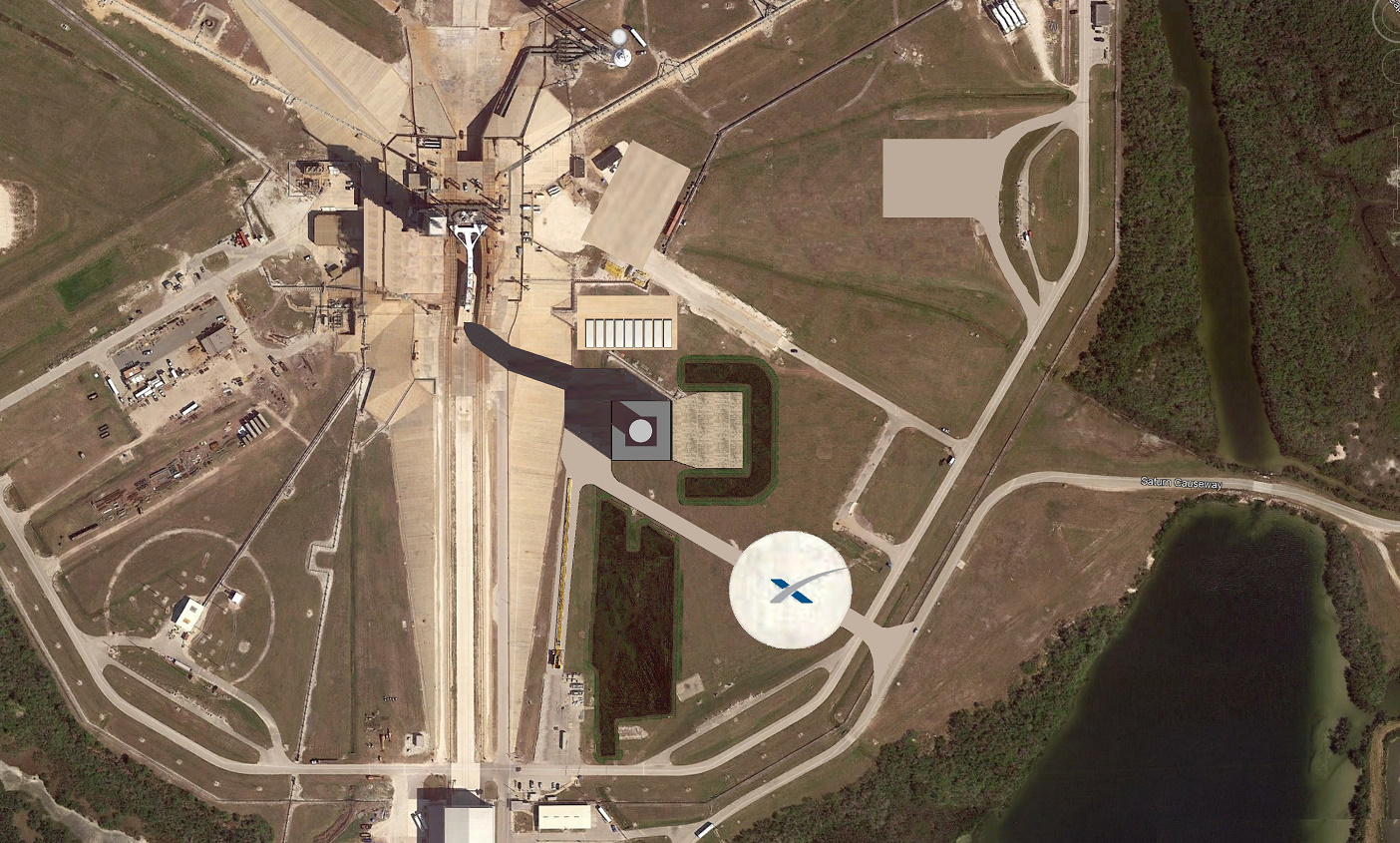 It also cites the continued used of the Falcon fleet, at a very high launch cadence, for at least another five years.

SpaceX is hoping to move to the use of Starship and Super Heavy as its primary vehicle but had noted that they will continue to use Falcon 9 and Falcon Heavy based on customer demand.

The post SpaceX present to future: From retesting boosters to planning a Starship pad appeared first on NASASpaceFlight.com.