Following the launch of SpaceX’s 18th Commercial Resupply Services 1 contracted cargo mission, the CRS-18 Dragon has arrived at the International Space Station on behalf of NASA.

CRS-18 was scheduled to launch from SLC-40 at the Cape Canaveral Air Force Station, FL, on Thursday, 24 July 2019 in an instantaneous, single second launch window.  Dragon arrived 45 minutes ahead of schedule on Saturday, following capture shortly after 9:10 AM Eastern.

A new stripe for Falcon 9:

The customary black and white look of the Falcon 9 has received an upgrade for the CRS-18 mission, coming in the form of a gray band around the bottom of the rocket’s second stage.

The gray band is not cosmetic, but rather has to do with thermal conductivity into the RP-1 kerosene propellant tank portion of the second stage.

During a launch for cargo resupply runs of Dragons to the International Space Station, the second stage is reignited after deploying its payload into orbit so that the stage can perform a destructive reentry over the open ocean.

For CRS missions, maintaining fuel (RP-1 kerosene) and oxidizer (densified Liquid Oxygen) temperatures in the second stage is not as challenging as it is for long coast missions which sometimes require the propellants to be thermally maintained or reconditioned up to six hours after launch – as is the case for some Geostationary Transfer Orbit missions and Defense missions for the U.S. government.

The most challenging aspect of thermal control up until now had been maintaining the densified liquid oxygen’s (LOX’s) temperature and chilling that LOX back down to an acceptable temperature before second stage reignition on long coast flights. 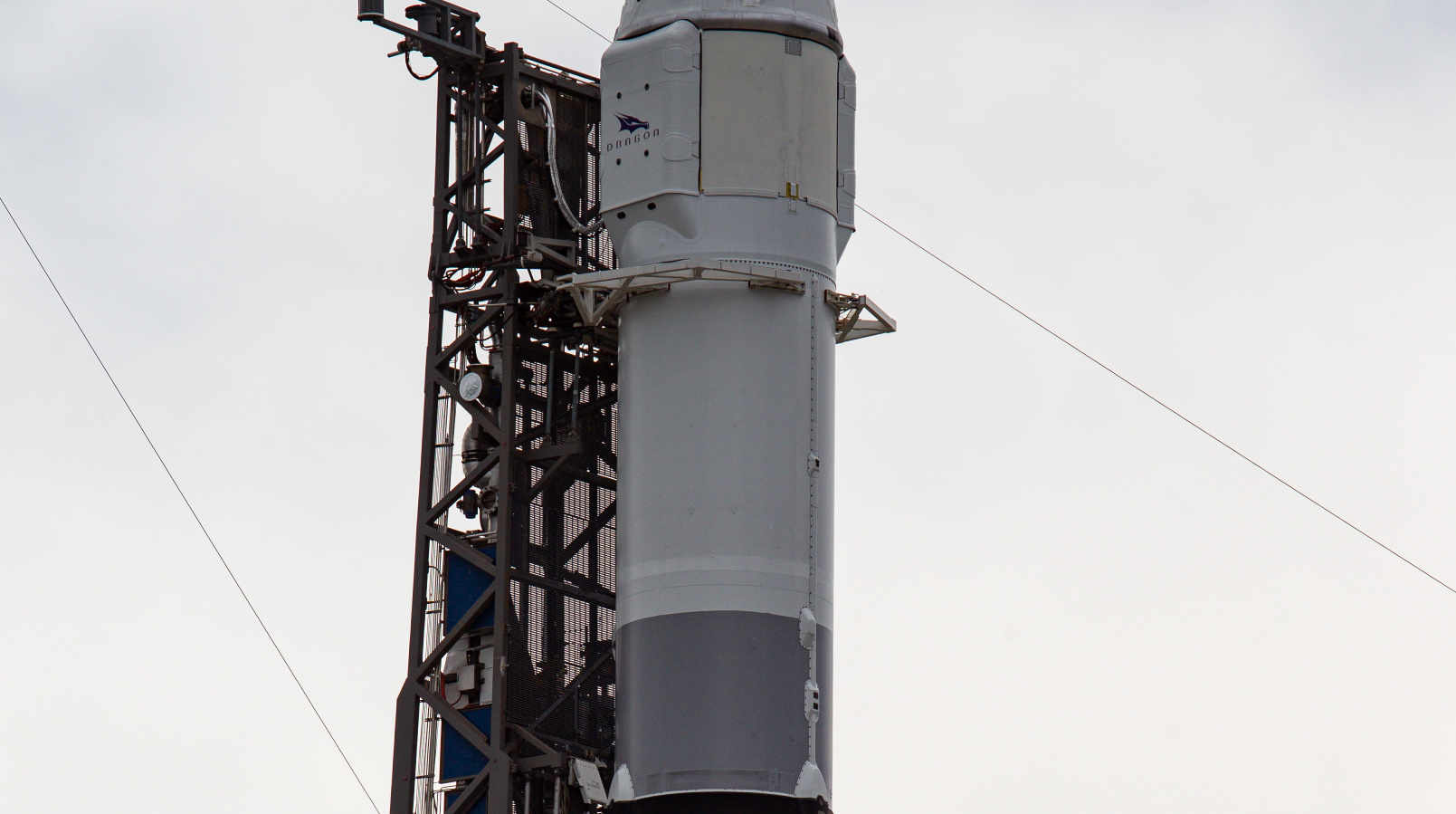 SpaceX has solved the issue for the LOX portion of the second stage, employing a mechanism that chills the LOX back down before stage reignition.

But while the LOX has to be chilled back down, the opposite is true for the RP-1 kerosene fuel, which has to be heated back up.

The change in color is designed to permit heat transfer from the LOX tank into the RP-1 tank, essentially taking some of the heat that isn’t needed in the LOX tank and transferring it to the RP-1 fuel tank where it is needed. 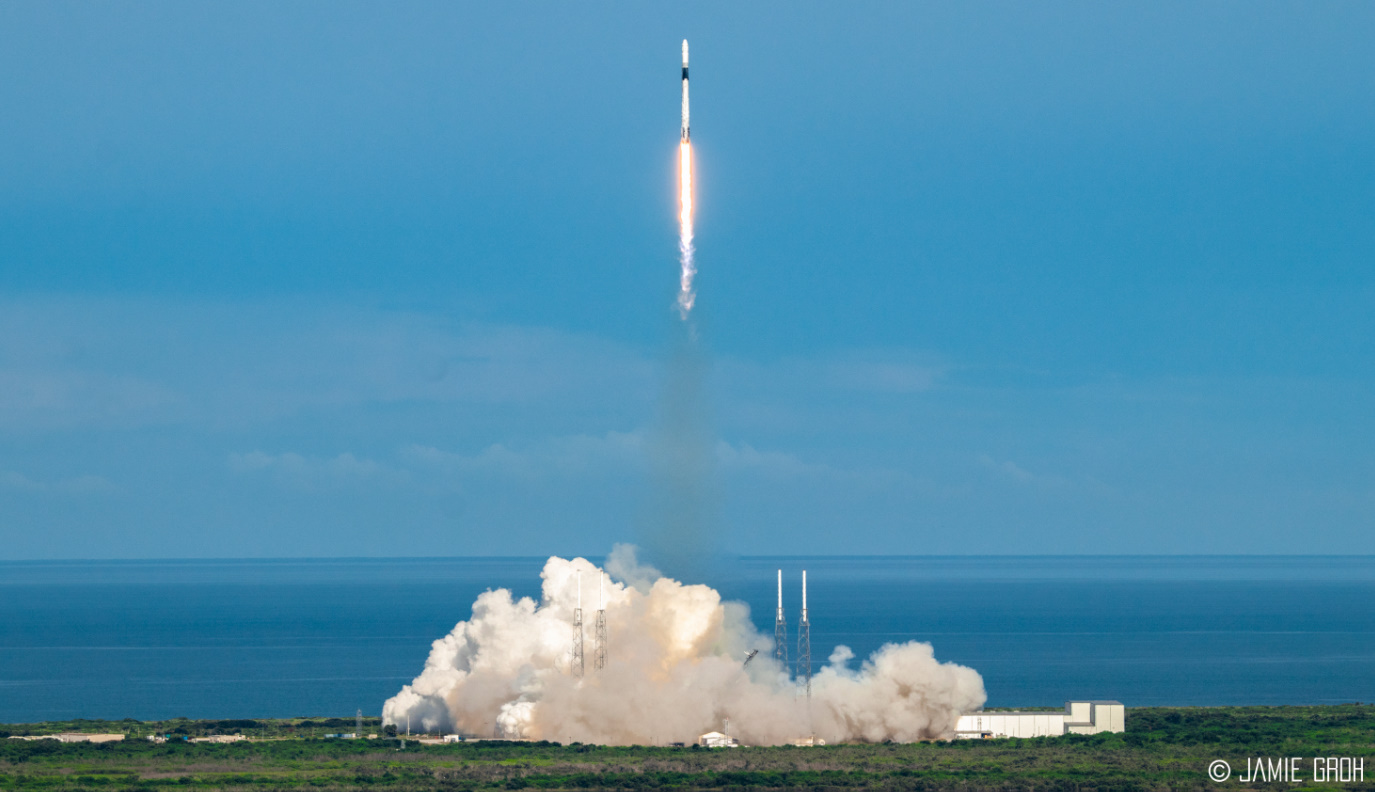 CRS-18 launches on Falcon 9 – by Jamie Groh for NSF

The results of this experiment with the medium gray fuel tank will be compared to identical CRS missions that flew the all-white tank variant for the second stage, providing similar test conditions to gauge the effectiveness of the new gray tank’s heat transfer ability.

To date, numerous CRS resupply missions have flown with subsequent, secondary burns of the second stage as SpaceX either deorbited those stages or tested various elements of long coast missions.

In addition to the second stage test, CRS-18 sports an increase in reusability for SpaceX.

The first stage of the Falcon 9, core B1056.2, was making its second flight to date, having previously been used to launch the CRS-17 mission for SpaceX and NASA on 4 May 2019. 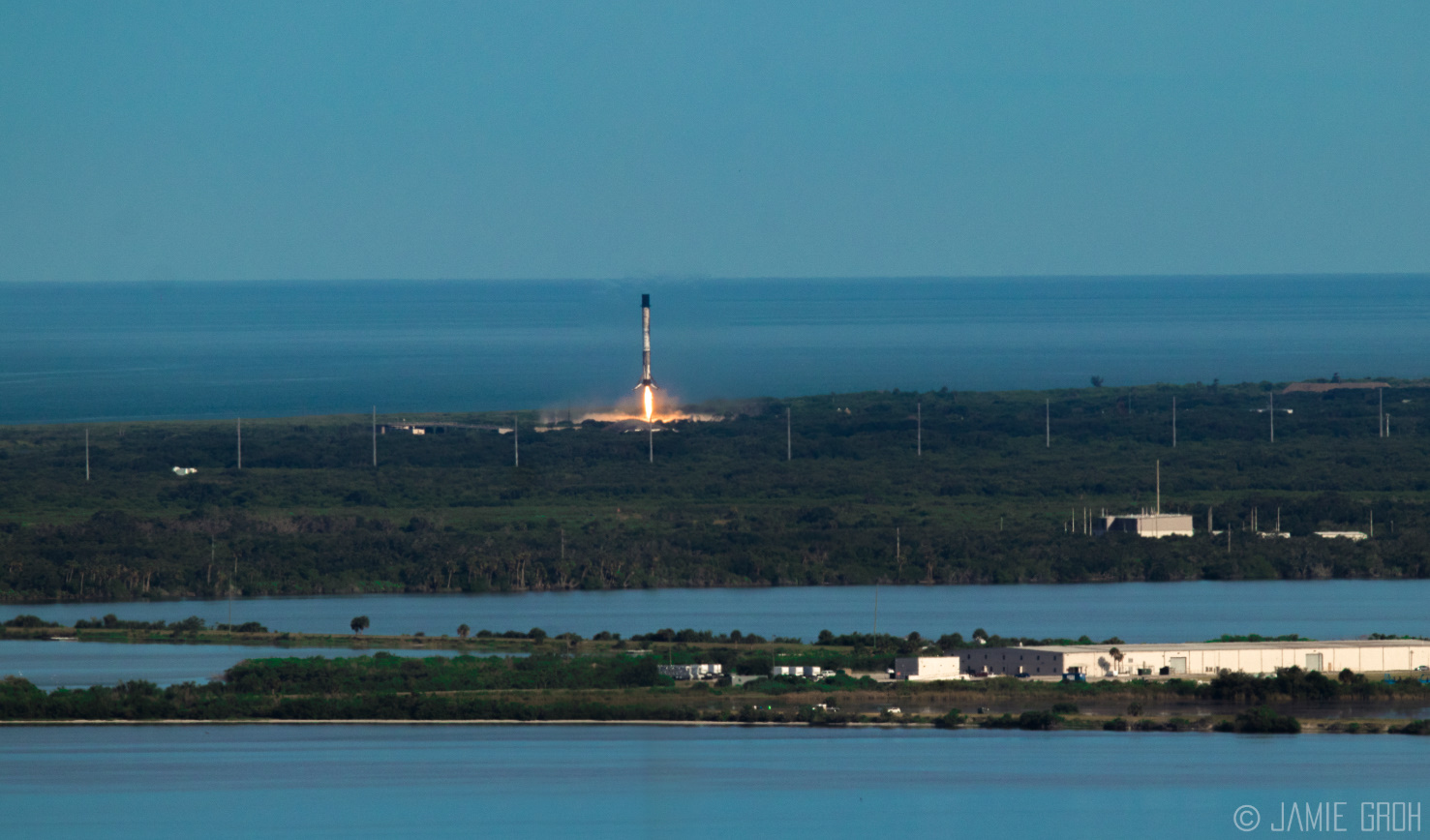 The booster landed on the ASDS drone ship Of Course I Still Love You parked approximately 12 km off the coast of Florida as Landing Zone 1 (LZ-1) was unavailable at the time of its mission.

The core was then refurbished and underwent a static fire last week as is customary for all Falcon 9 missions.

But the true star of this mission is the cargo Dragon spacecraft itself.

While this is not the first time a previously flown cargo Dragon will make another run to the International Space Station, it is the first time that SpaceX is using a Dragon for a third time.

This particular cargo Dragon previously flew missions to the International Space Station in April 2015 and December 2017 as part of the CRS-6 and CRS-13 missions, respectively.

After launching CRS-18 on its way, the first stage flipped around and flew itself back to LZ-1 for a Return To Launch Site landing.

This was the 44th booster landing on recovery for SpaceX.

Number 44 on the recovery count.

Still not getting old. Still spectacular. Still remember "industry" people telling me it would be "impossible without massive payload upmass penalties". pic.twitter.com/07Dr24NFwk

Moreover, as confirmed by NASA back in May, with the successful landing of this booster, NASA will proceed forward with using it for a third time on the CRS-19 mission coming up later this year – marking the first time NASA and the U.S. government reuses a Falcon 9 first stage for the third time.

The Dragon was also making its third flight, arriving at the ISS on Saturday.

Using the standard approach of entering the Keep Out Sphere after the 250-meter hold point and making incremental approaches towards the Station, Dragon edges closer to the 200 meter and 30-meter hold points, before arriving near the Space Station Remote Manipulator System (SSRMS).

The arm then “reached out” and grappled the Dragon ahead of being attached to Node 2.

Loaded inside Dragon’s pressurized capsule will be over 2,500kg of cargo, including food and consumables for the ISS crew and several major scientific investigations set to be carried out in the space station’s microgravity environment.

One of the largest pieces of equipment is the third International Docking Adapter (IDA-3), which is placed in the Dragon’s unpressurized “trunk” and will be removed during docked ops.