The huge launch pad complex for Arianespace’s new workhorse, Ariane 6, is in the final months of construction ahead of the new rocket’s debut in 2021. ELA-4 includes a massive mobile gantry that will roll back off the pad ahead of launch. Arianespace is currently working on constructing 14 contracted Ariane 6s.

The Ariane 6 launch complex has been under construction since 2017 and – per the latest update this week – is expected to be completed before the end of 2019.

Located between the areas used by the Ariane 5 and Vega rockets and the Soyuz launch complex, ELA-4 takes up the largest area of rocket real estate at the European spaceport in Kourou, French Guiana.

The complex involves three major construction elements, all of which will host Ariane 6 after its stages arrive at the spaceport by ship. 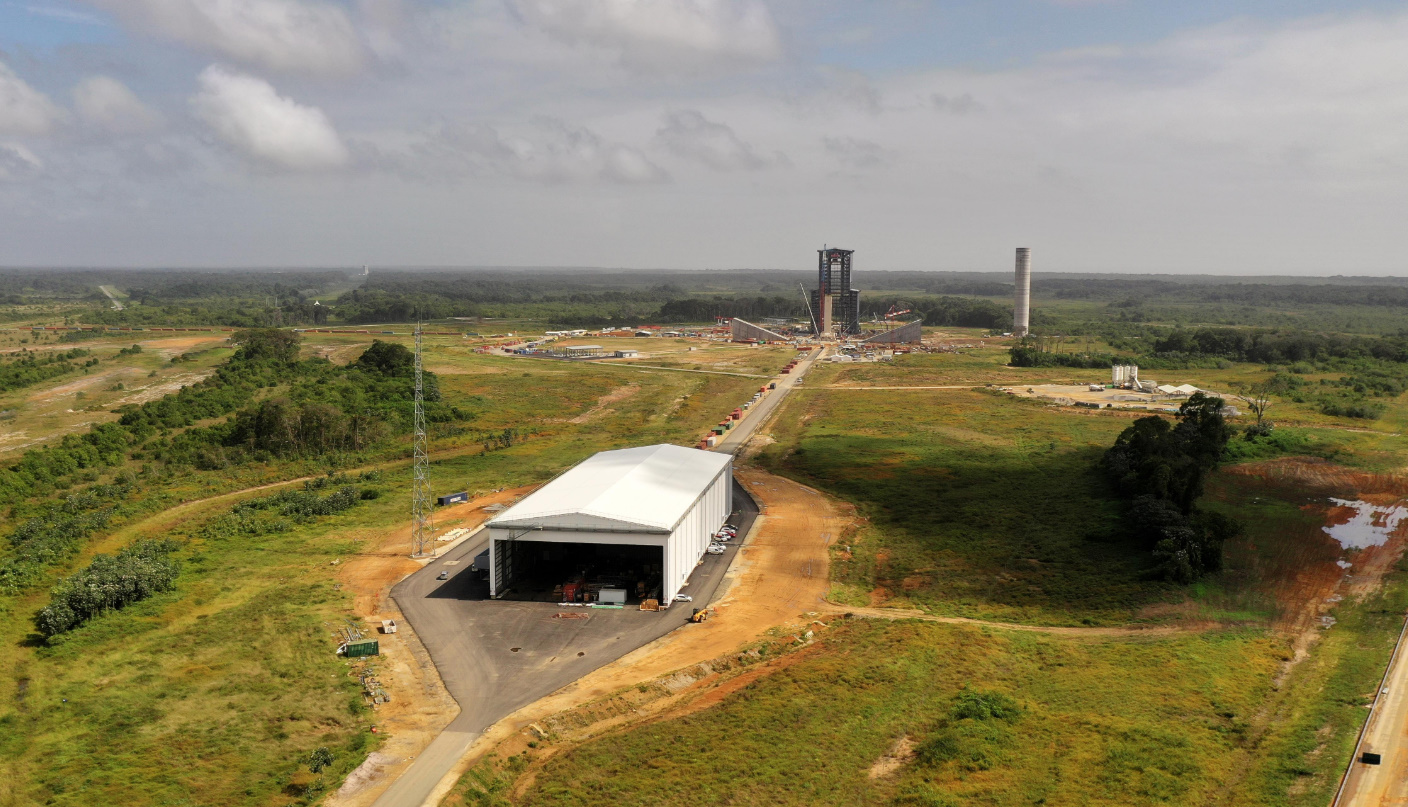 First, they will enter the Launch Vehicle Assembly Building (above), which is 20 meters tall, 112 meters long, and 41 meters wide, located 1 km away from the launch zone. It will be used for horizontal integration and preparation before rollout to the launch zone.

The processing flow calls for the first and upper stages to be mated in the LVAB.

The integrated launch vehicle will then enter the largest structure of the complex, the mobile gantry – a large building weighing 8,200 tonnes that is able to move on rails – which will house Ariane 6 for final launch preparations until shortly before launch.

This part of the flow will allow for the boosters to be mated to the first stage, followed by the encapsulated payload to be mated atop the rocket.

…in a building called a gantry. But instead of moving the rocket from the gantry, the gantry will move from the rocket! Ariane 6 has a mobile gantry, meaning it sits on the launch pad but moves (on rails) when it's time to launch, giving engineers more time for preparations

The mobile gantry is equipped with platforms to give access to the launch vehicle for integration on the launch pad. It stores and protects Ariane 6 until it is retracted before launch.

With the gantry rolling back, the Ariane 6 will be sat on the ELA-4 pad, which has been a major construction effort in its own right.

The pad is 28.5 meters deep and 200 meters wide, formed with enough concrete to fill 67 Olympic sized swimming pools – approximately 167,500 cubic meters.  It started life as a huge hole in the ground, as seen in this video showing the construction status from last year. It has since been filled with steel and concrete.

In total, it now comprises of a 700 tonne steel launch table that will support Ariane 6. Steel deflectors funnel the fiery plumes of Ariane 6 at liftoff into the exhaust tunnels buried deep under the launch table.

Four lightning protection masts – and a water tower for deluge systems – are also part of the launch pad.

ESA recently provided a full launch flow video for Ariane 6, showing the various stages of processing ahead of launch.

Ariane 6 will be available in two versions depending on the required performance: A62 with two strap-on boosters, and A64 with four.

The vehicle will hit the ground running, with Daniel Neuenschwander, Director of ESA Space Transporation noting that 14 Ariane 6’s are booked for construction in this initial launch salvo.

Mr. Neuenschwander cited the Upper Stage as a key part of the future aspirations of the new Arianespace rockets, per the task of deploying constellations of satellites.

This is a major requirement for one of its initial customers during the early lifetime for Ariane 6, given it has already been tasked with launching a huge number of OneWeb satellites.

This actually begins with the maiden launch of Ariane 6, part of an agreement that includes numerous additional launches over the following years.

The launch service agreement specifies the use of the qualification launch of the Ariane 62 version, scheduled for the second half of 2020; the two Ariane 6 options (either in its 62 version, accommodating up to 36 OneWeb satellites, or in the 64 version, up to 78 OneWeb satellites) will be utilized starting in 2023.