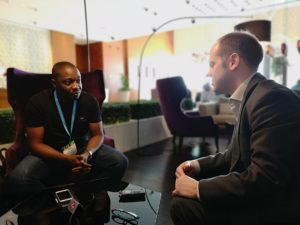 While there is much debate in the satellite industry about the way the video market is evolving, in many emerging markets like Africa that lack terrestrial infrastructure, satellite pay-TV is still seen as a huge potential growth market — even if it is characterized by low Average Revenue Per Users (ARPUs). One of the new kids on the block is TSTV, a new Nigeria-based pay-TV operator, which is already working with partners such as Azercosmos and ABS. TSTV’s demands for satellite capacity are likely to grow as it looks expand its business beyond Nigeria.

In this interview with Via Satellite, Bright Echefu, the founder and CEO of TSTV, talks about his future-facing growth strategy for business in Africa and beyond.

VIA SATELLITE: Where are we in terms of TSTV’s business plan?

Echefu: When we started TSTV, we had recognized the need for us to create a pay-TV proposition that was in response to the needs of the average Nigerian. At that time, we had operators that provided services that were too expensive and there was this arrogance in which the operators dealt with customers. Prices were being increased overnight. Of course, the services they were offering were good, but the pricing being offered was very expensive for the average person.

One of the issues is that there are often power problems in Nigeria, so when you recharge your set-top box, most of the days you don’t have power to watch it. Over the course of a month, you may have power for around six hours a day. Some days you may have no power at all. This has been the model we have seen in Nigeria since the advent of pay TV. We recognize the challenges that the country is facing, so we wanted to create a model that suits this challenge, and this is having a medium where people can watch and pay for the content they watch.

VIA SATELLITE: Let’s talk about the pay-TV market in Nigeria. We are seeing satellite suffer in many markets against the onslaught of OTT. What are the unique dynamics in terms of Nigeria?

Echefu: I would not say that internet awareness in Nigeria is poor. But, it is expensive. Over-the-Top (OTT) has limited growth potential right now. Most people/companies that have tested OTT in Nigeria have failed. IPTV does not really work in Nigeria. Internet subscription is expensive. So, people are still used to conventional cable/satellite pay-TV. But, we are also planning for the future. So, we are looking to create our own platform locally to prepare ourselves for OTT penetration across Africa. We are setting up our own data center and headend for an OTT platform. We may not be able to introduce it immediately, as the market is not strong. The reason is that the internet itself is very expensive for consumers.

VIA SATELLITE: What is the ARPU for your current customers? How many more customers do you expect to have in two- to three-year’s time?

Echefu: Well, over three million people are accessing our content. We are billing people at around $7 a month. We think Nigerians are very passionate about TSTV. We are looking at retaining every customer that we have acquired. We are acquiring more content, acquiring more rights, increasing our network and reach. The target we have is 150,000 new TSTV set up boxes per quarter being introduced into the market, and with that we will continue to grow our numbers.

VIA SATELLITE: Are you looking to go beyond Nigeria? StarTimes and MultiChoice are pan-African players. Do you have similar ambitions?

Echefu: I was in Zambia recently. We are looking to penetrate this market as well. We have started to look to get the licenses there. We are currently available in other West African countries. What this means is that TSTV penetration has already started in other countries, and we have started to look at other markets in East Africa and South Africa. My meeting with the regulators in Zambia was a success and maybe in the next couple of months, we will be able to have our services in Zambia as well. Right now, the pay-TV market in Zambia is very expensive. The regular operator has dominated this market. We hope to get something good going in Zambia very soon.

VIA SATELLITE: With satellite capacity partnerships already in place with ABS and Azercosmos, do you think you will need more capacity to serve the market and expand?

Echefu: We have entered into a new deal with Azercosmos. We have four transponders that we have leased from them. We have well over 154 Megahertz (MHz) of satellite capacity that we have leased which can carry more than 120-150 channels. Right now, we have 72 channels, but we have the capacity to increase the number. The interesting thing is that 46 of the channels are in HD. So, we are giving a quality channel offering in terms of pay-TV. We think this is very different from other operators. We will also be adding ten new channels to the platform soon. We have every genre taken care of in terms of content. We have just created a comedy channel, that appeals to the African person. We own 27 channels ourselves.

VIA SATELLITE: Are you in discussions with any
other operators?

Echefu: We have been able to consolidate on the platforms that we are on now. They have given me very good deals. If I go to Zambia, and I discover Azercosmos does not have a footprint in Zambia, then I would have to look for another operator who has a footprint to cover the Zambia market.

Echefu: People still want to watch long-form content and mobile devices don’t really cater to this demand. The good news is, that for the people that can afford it, the internet is a great way to access content. But, the numbers who can’t afford to do this are huge. So, you have to cater to that number. The TV population in Nigeria is well over 40 million. Right now, pay-TV has been able to capture only around 18 percent of that number. So, we still have a big gap that we are hoping to cover over time.

I am optimistic that we can get up to 20 percent pay-TV penetration amongst the TV population in Nigeria. I think the existing providers has captured around eight million pay-TV households in the country. Right now, there are only three pay-TV operators in the country — MultiChoice, StarTimes, and TSTV. We all have individual growth plans. I am not sure there is enough financing for any of the operators to have really aggressive growth in this market. But, to be objective, the market for pay-TV subscribers can easily grow around 10 percent over the short- to mid-term.

VIA SATELLITE: We are seeing a number of LEO satellites going up and particularly targeting regions like Africa. Could you yourselves looking to have capacity on these satellites?

Echefu: You have to look at the overall footprints of the satellite. If the cost is good, then why not? If the satellites are stable, we would do business with them.

VIA SATELLITE: Nigeria has always been on a very interesting path as a space-faring and satellite-equipped nation. It has its own satellite operator, Nigcomsat. How do you see the country’s space and satellite activities developing?

Echefu: I am sorry to say this, but I have seen the growth of international satellite companies but I am sorry to say I am not seeing this in Nigeria. In all honesty, we are not seeing growth in Nigeria. I am not sure the government has seen the potential for growth that satellite based communications could have in Nigeria. It is a huge potential market. I don’t understand why investments in satellites and space based technologies in not a priority for our government. Nigcomsat is performing below expectations in my opinion. The satellite is 7-8 years old. Given the size of Nigeria, I expect more from Nigcomsat. We are not seeing it. So, unless we start seeing private sector investments in satellites, which I don’t see happening, then it will be a market where the potential is not being reached.

VIA SATELLITE: Finally, what message would you like to give to the satellite industry will be reading this interview?

Echefu: I know how it is to keep up businesses in this industry. I know that Venture Capital (VC) companies own a number of satellite operators. Because of that, they need the users to generate ROI. If a satellite operator really wants a company like TSTV to come onto their network, pricing really does need to be considered. I am sorry to say that a dollar is a lot of money in Africa. If I am asked to pay $1,500 for a MHz and I need 3 MHz for a full High Definition (HD) channel. What that means is that I am paying $4,500 a month. The question is — How many African content providers can afford $4,500 a month? This is a huge cost when converted to our local currency. That is why you don’t have many African channels on satellite. There is a big market for satellite in Africa, but the pricing has to be good enough to encourage people to come onto satellite. We are paying heavily for satellite capacity. It is a problem for us. The business of pay-TV is growing in Africa. We are part of it. Many have come and gone, but we plan on being here and expanding into other parts of Africa as well. We will not disappoint, and we will be a major player in the African pay-TV market.