The much-awaited and heralded launch of SpaceX’s Starlink internet satellite constellation will make another attempt to launch on Thursday.  With the twice-flown Falcon 9 rocket on SLC-40 at Cape Canaveral Air Force Station, Florida, SpaceX was targeting launch of the first batch of 60 Starlink satellites, last week. However, unacceptable Upper Level Winds scrubbed the first launch attempt. Then, a week ago, a requirement to update the Starlink software delayed the launch into next week. This latest launch window opens at 10:30 pm Eastern.

A flat and compact design that is “significantly more scalable and capable than its first experimental iteration”, noted SpaceX in the mission’s press kit.

In all, each Starlink satellite is equipped with multiple high-throughput antennas, a single solar array, and (crucially) Hall thrusters powered by krypton – all designed to bring low-latency, high-throughput internet services to every part of the world.

The Hall thrusters will allow each Starlink to independently maintain its orbit, adjust its position, and deorbit at the end of its operational life. 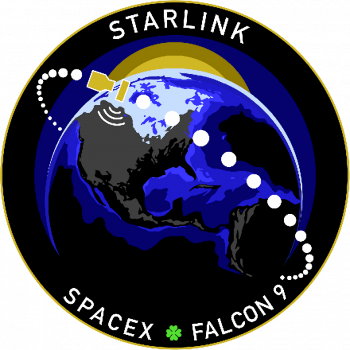 Orbital position, navigation, and precision pointing for each Starlink is enabled in part by a Startracker system that is built upon the same Startracker used by the cargo and crew Dragon spacecrafts developed by SpaceX.

More impressively, the Startracker system will allow each Starlink to independently track on-orbit debris and autonomously fire its Hall thrusters to avoid debris.

At the end of their lives, this current round of Starlinks will mostly burn up in Earth’s atmosphere, with only 5% of each Starlink surviving atmospheric reentry.

Subsequent generations of Starlinks already under construction will be completely disposable, with 100% of the craft burning up in the atmosphere at the end of its lifetime.

Importantly, while this is the first batch of operational Starlinks to be launched, SpaceX does expect to encounter some issues as the satellites are deployed and brought into operational use.

This is part of SpaceX’s overall philosophy of “design, fly, iterate, fly again” which has served the company well in its development of critical capabilities that just a few years ago were deemed “impossible” or “unfeasible” by the larger spaceflight community.

To this end, any issues encountered with this first round of Starlink satellites will not be classed as failures by SpaceX but rather as areas to learn from that are “key to developing an affordable and reliable broadband service in the future.”

The first phase of the Starlink deployment plan will see 1,584 satellites in 550 km orbits inclined 53° to the equator and spread out across 40 different orbital planes of 66 Starlinks per plane.

Based on this plan, it will take 24 Falcon 9 launches of 60 satellites to complete the first phase of Starlink deployment.

The 550 km orbital shell, as it is known, is the middle of three orbital shells planned for the overall Starlink constellation.

SpaceX currently plans to build out the 550 km shell first, and then move on to deployment of the other two orbital altitude locations.

At present, SpaceX plans to complete deployment of the entire Starlink constellation by the mid-2020s.

The first launch of operational Starlink satellites will mark the:

Moreso, it is the heaviest payload ever launched by SpaceX to date on either their Falcon 1, Falcon 9, or Falcon Heavy rockets.

With each Starlink satellite weighing in at 227 kg (500.5 lb), the total payload mass from just the Starlinks, not counting the adapter and deployment mechanisms, comes in at an impressive 13,620 kg (30,027 lb).

The previous heaviest payload for SpaceX was the company’s Crew Dragon Demo-1 flight in March 2019, which had a launch mass of 12,055 kg.

It is also the tightest packed payload inside the payload fairing of the Falcon 9, with Elon Musk noting there wasn’t much room to spare around the sides of the fairing with the Starlinks inside.

Mr. Musk also noted that the 60 starlink satellite count for this mission is not the maximum number of Starlinks SpaceX could have packed on board the Falcon 9. If SpaceX were to sacrifice recovery and reuse of the first stage of the Falcon 9, they could have added more Starlinks into the payload fairing.

However, reusability has become an increasingly important part of the operational plan for SpaceX, with the company opting to delay the CRS-17 cargo Dragon launch earlier this month when a drone ship electrical issue would have forced them to expend a brand new booster rather than recover it.

To this end, SpaceX has opted not to launch the maximum number of Starlinks possible on the Falcon 9 in favor of a reduced payload mass to allow for a downrange recovery of the booster on the ASDS drone ship Of Course I Still Love You.

Of Course I Still Love You will be positioned 619 km (385 miles) +/-18.5 km (11.5 miles) northeast of the Cape Canaveral Air Force Station, roughly 322 km (200 miles) east of Charleston, South Carolina, in the Atlantic Ocean where it will catch the first stage of the Falcon 9.

The first stage booster for this mission is B1049.3, making its third orbital launch following the Telstar 18V mission from SLC-40 last year and the Iridium NEXT-8 launch from Vandenberg’s SLC-4E in January 2019.

After reaching a 440 km orbit, the 60 Starlinks on the launch will be deployed at this lower orbital altitude.  They will then all use their onboard propulsion systems to raise their orbits to the operational 550 km altitude.