Delays in the assembly and test schedule for the agency’s Space Launch System (SLS) booster assigned to launch EM-1 precipitated the start of a flurry of activity in early March to try to find other ways to make sure the mission will liftoff in 2020. Ultimately, SLS won, beating the alternatives – such as a fully expendable Falcon Heavy – as the best option to launch EM-1 per the provided guidelines.

EM-1 is the first Orion solo mission, but its second test flight and many elements of its configuration are already stable. The EM-1 spacecraft is also being closed out for launch ahead of a multi-month test campaign later this year at Plum Brook Station in Ohio, and LSP had to take these factors and more into consideration in looking at the feasibility of the proposal, above and beyond the question of launch vehicle lift capabilities.

The two-week feasibility study had elements that were familiar to LSP, but also ones that were unusual. The June, 2020 launch date, which was NASA most recent official commitment, left very little time to consider anything but current products and services; however, agency leadership has indicated that they are not closing the door on alternatives to launch Orion.

LSP found at least one combination that could be worth further investigation and the Administration may be interested in pursuing development of others.

Exploration Mission-1 (EM-1) is currently planned to take NASA’s Orion crew vehicle into a distant retrograde orbit (DRO) of the Moon on an uncrewed test flight, the first in which the spacecraft will fly on its own. The agency’s leadership learned in early March that its most recent launch commitment of June, 2020, could not be met based on SLS schedule estimates at that time.

With some schedule estimates at that point suggesting SLS might not be ready until well into 2021, NASA began looking at all their options to keep EM-1 on a 2020 schedule. One of those efforts was to request that NASA’s Launch Services Program (LSP) evaluate the feasibility of substituting an existing U.S. commercial launcher or launchers to fly Orion on the EM-1 mission.

LSP first heard about the study request from NASA Headquarters in Washington, D.C. on the weekend before the agency’s formal submission of its Fiscal Year 2020 budget proposal on March 11. “I think we first got word of it the weekend of the 9th and 10th of March, so we came in and hit it hard on that Monday,” James Wood, NASA LSP Chief Engineer, said in an April 10 interview.

“Of course we spent a little bit of time over the weekend scoping out how we were going to approach the problem and package it so that we could work it with a small team and work it quietly as we were initially asked to do. We had just spent a couple of solid days working the problem and then the Administrator (NASA Administrator James Bridenstine) I think his first mention of it in public was on the 13th.”

“And so then we said ‘OK, we’re not going to worry about being altogether so quiet now’, but we said we’re going to just keep working this,” he added. “It took right about two weeks before we had something that we were reasonably happy with.” 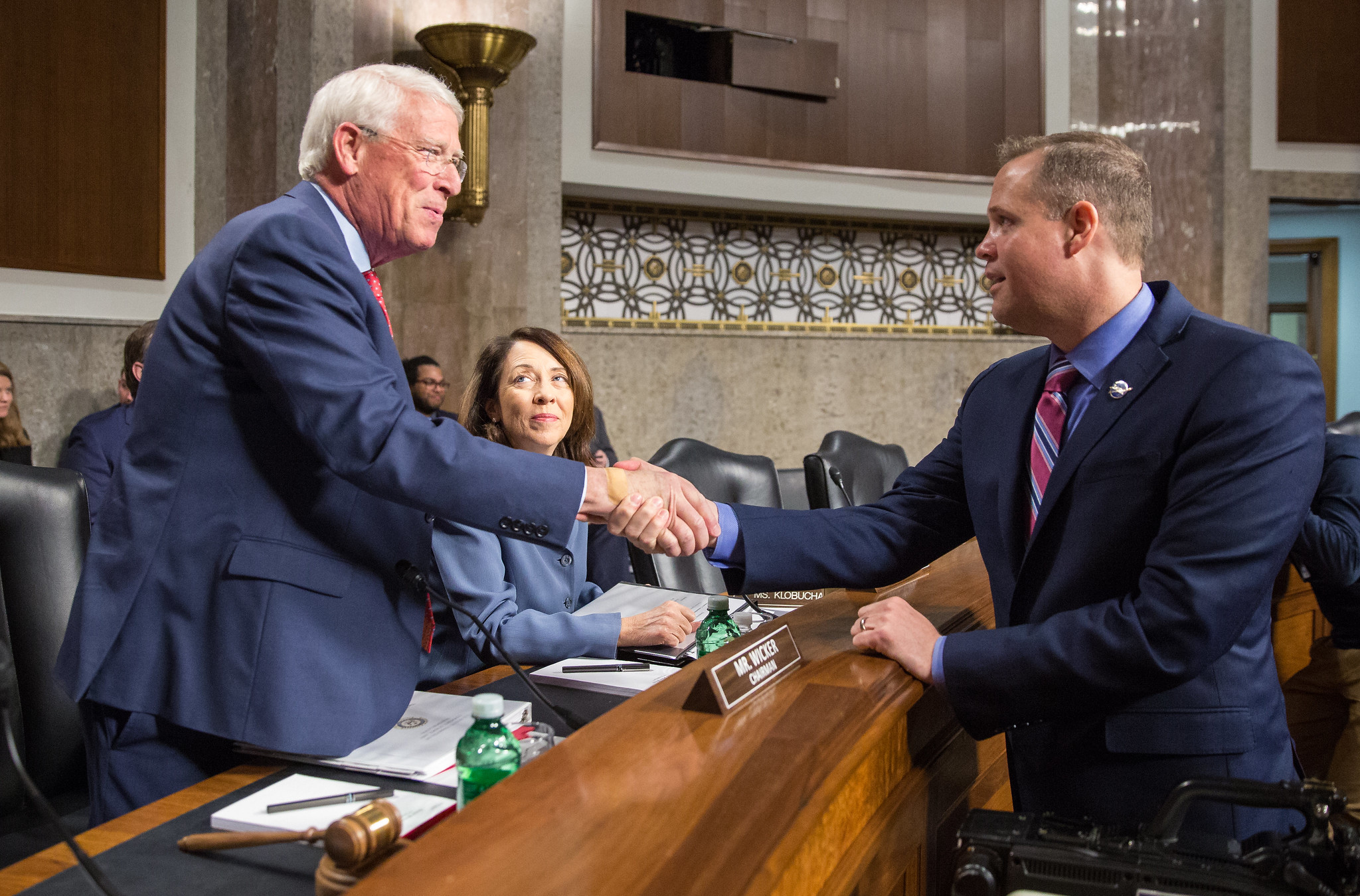 NASA Administrator Jim Bridenstine shakes hands with Senator Roger Wicker of Mississippi, the Chairman of the Senate Committee on Commerce, Science, and Transportation on March 13 at the Dirksen Senate Office Building in Washington, D.C., prior to a Senate hearing. Ranking Member Senator Maria Cantwell of Washington State is seated in between. Administrator Bridenstine announced the EM-1 alternate launcher study during questioning in the hearing. Credit: NASA/Joel Kowsky.

“We provided the assessment to Headquarters — to HEO (Human Exploration Operations Mission Directorate) and to the Administrator’s office — we provided that, that’s been out-briefed,” Wood noted. “To my knowledge they are still assessing the results and I guess they’re deciding whether or not they want us to do anything additional.”

The study was short, but busy. “We were definitely working it fairly intense,” Mike Carney, NASA LSP Flight Analysis Division Chief, said in the interview. “I wouldn’t say we were working all weekend on it but there were evidently some activities going on over the weekend or in the evenings.”

“Some late day phone calls between us and Headquarters that were happening on a regular basis to just give NASA Headquarters a status where we were with the study,” Carney said.

“It was like having a mission on the West Coast,” Wood added. “Those are the normal hours we keep when we’re launching out of Vandenberg.”

In addition, LSP consulted with the existing NASA programs, Orion’s prime contractor, Lockheed Martin, and commercial launch service providers. “From the flight design/launch vehicle performance perspective, we were working with a couple of organizations outside of Kennedy,” Carney said.

“One was the Johnson Space Center (JSC) Orion folks and of course they had all of the information relative to the Orion mission design and specifics on the lunar injection delta-Vs and the trans-lunar injection (TLI) requirements and we were also working with the Marshall (Marshall Space Flight Center) folks that were tied to the SLS Program that had been working with JSC on Orion.”

“They were familiar with a lot of the launch vehicle performance requirements and constraints and they were helping us just in general understand what we had to do from a performance perspective to satisfy the Orion mission requirements and just again integrate all that together.

“It was definitely a good collaborative effort, we had several just technical telecons between my flight design folks here at KSC (Kennedy Space Center) and then the JSC Orion folks that worked that part of the mission design portion of the problem and then again the Marshall folks that had been helping with the launch vehicle mission design as well.” 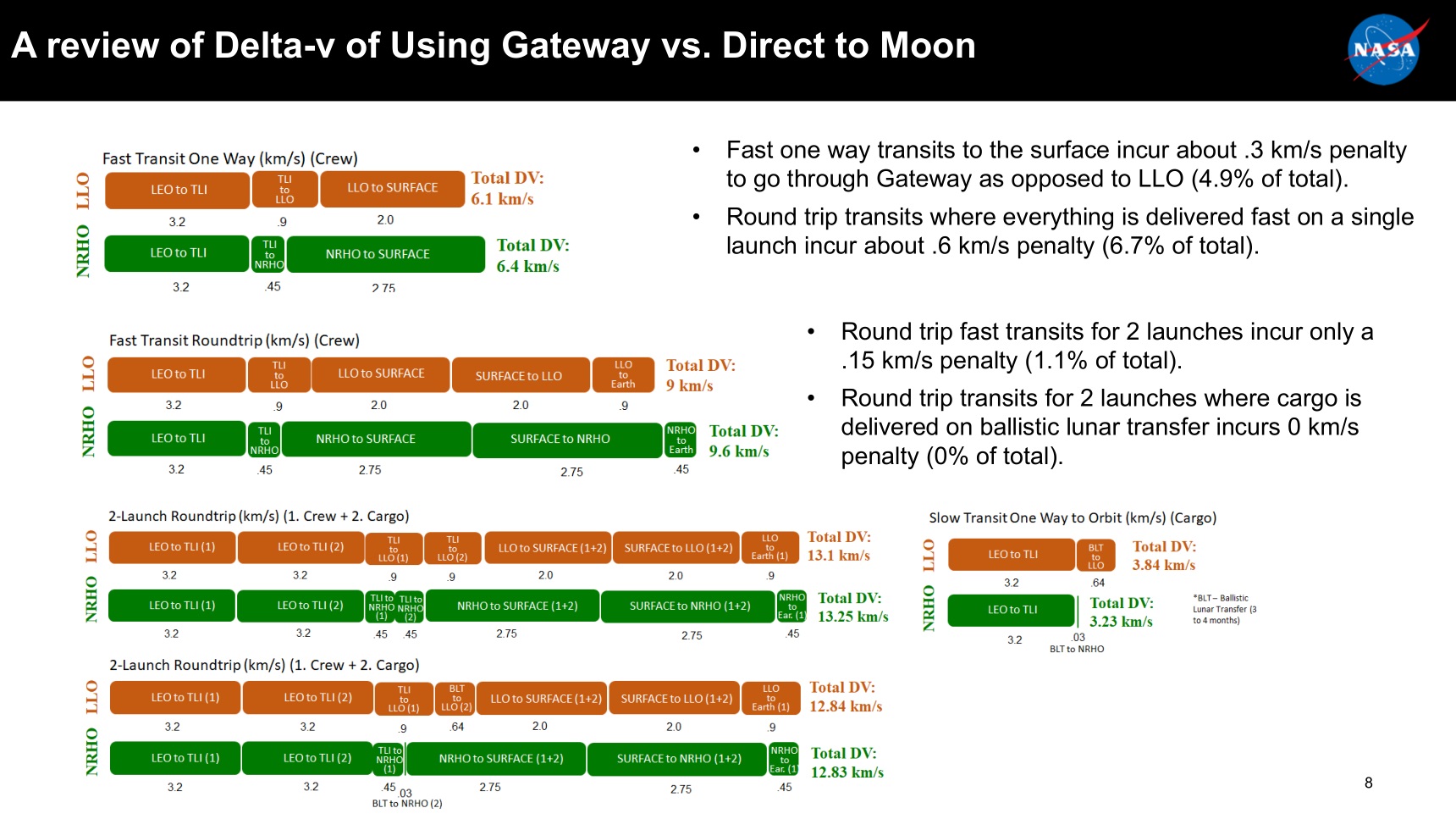 A chart comparing the velocity change (Delta-V) to get from different points between the Earth and Moon with or without the Lunar Gateway. The leftmost segment from Low Earth Orbit (LEO) to Trans Lunar Injection (TLI) is the part that the EM-1 alternate launcher study was evaluating. For the EM-1 study, NASA was looking for 3.1 km/sec of delta-V to get the 25 metric ton uncrewed Orion from LEO to TLI. Credit: NASA.

Given the current circumstances, none of the launch provider options could close the performance case on its own, and for now NASA is pursuing other options to keep the EM-1 launch targeted for 2020.

LSP provides the integration between NASA spacecraft programs and launch services providers like Northrop Grumman, SpaceX, and United Launch Alliance, all the way from selecting a launch vehicle through liftoff and beyond. One of the unusual characteristics of the Orion alternate launcher study was how short a time period was given to look at feasibility.

“When it comes to doing the advanced mission study work and quoting launch vehicle performance, we get asked to do that all the time,” Carney explained.

“It’s primarily through a request that comes from our traditional spacecraft customers, so the science payloads that we work with all the time that have a concept or an idea for a mission.  And they’ve got a rough mass estimate and they’ve got some general idea of where they want to go and of course one of the first questions is ‘hey what kind of a vehicle do I need, how big of a vehicle do I need to get this much mass to this orbit?'”

“What you were describing were your daily kind of work in support of announcements of opportunity for a typical science and meteorology type mission,” Wood added. “That’s normal daily business and you’re going to expect that we’re going to have a three or more year integration cycle for any one of those missions.”

“Not only was that [Orion] stack already built — and it’s much heavier than anything we’ve ever carried with one of our mission customers — but then you’ve got the added burden of being able to execute that on a very fixed timeline — like suddenly having a planetary mission pushed onto your plate.”

LSP is managing several existing projects and part of the study was to assess whether they had the resources to add this project with a fast-approaching launch window to their workload.

“One of the things that I thought of as one of the reasons why they asked us to be the ones to look at this, [is] because we’re not just a mission design concept house,” Wood explained. “We only need to look in the mirror to find the guys tasked with doing it and would be finding out firsthand whether or not we had a good idea or not when we said this was feasible.”

“So we looked at this very much from the standpoint of we’re going to be the ones to have to do this, now how are we going to manage it, how are we going to bring this off? And oh, by the way, in 2020 we’ll have missions like Solar Orbiter, Mars 2020 a nuclear-powered rover very similar to the Curiosity rover, and couple of other missions that very much need our full attention,” he added .

“Our Program Manager, Amanda Mitskevich, and her deputy Chuck Dovale, they were very closely engaged with everything that we were doing because we had to work it as a fully integrated team and what resource trades, what schedule trades, and priority trades that we were going to have to make actually bring this off if somebody said ‘OK, you said the idea was feasible, now go do it.'”