It might be the final CRS1 (Commercial Resupply Services 1) contract flight for both the Antares rocket and the Cygnus spacecraft, but as the two prepare to transition seamlessly into the CRS2 round of cargo contracts for NASA beginning in the fall, they are both capping the current contract by debuting a host of new capabilities.

The mission is currently set to launch today at 16:46:06 EDT (2046:06 UTC) – the opening of a 5-minute launch window – from the Mid-Atlantic Regional Spaceport’s pad 0A on Wallops Island, Virginia.

Despite the significant firsts that will take place on this mission, the flight’s primary purpose is the successful resupply of the International Space Station.

To that end, the S.S. Roger Chaffee (Cygnus) is packed with a little more than 3,447 kg (7,600 lbs) of cargo, supplies, and equipment – making it the heaviest Cygnus spacecraft to have ever been launched on an Antares rocket.

The total cargo breakdown translates to 3,095 kg of pressurized cargo, including:

Cygnus will also carry 239 kg of unpressurized cargo and an additional 100 kg of unspecified cargo.

(A complete manifest overview can be found here on L2.)

Portions of this cargo were loaded at the pad during late load operations, the first time Antares and Cygnus have been able to support such an operation – and one that is required as part of the CRS2 contract for NGIS which begins in the fall.

The late load operations went according to plan yesterday, thanks in part to a mobile clean room and cargo loading system called the Mobile Payload Processing Facility, or MPPF.

The MPPF provides cleanroom access to the top of Antares’ payload fairing, which sports a new design in the form of a pop top at the peak of the fairing that can be removed to provide access to the Cygnus inside. 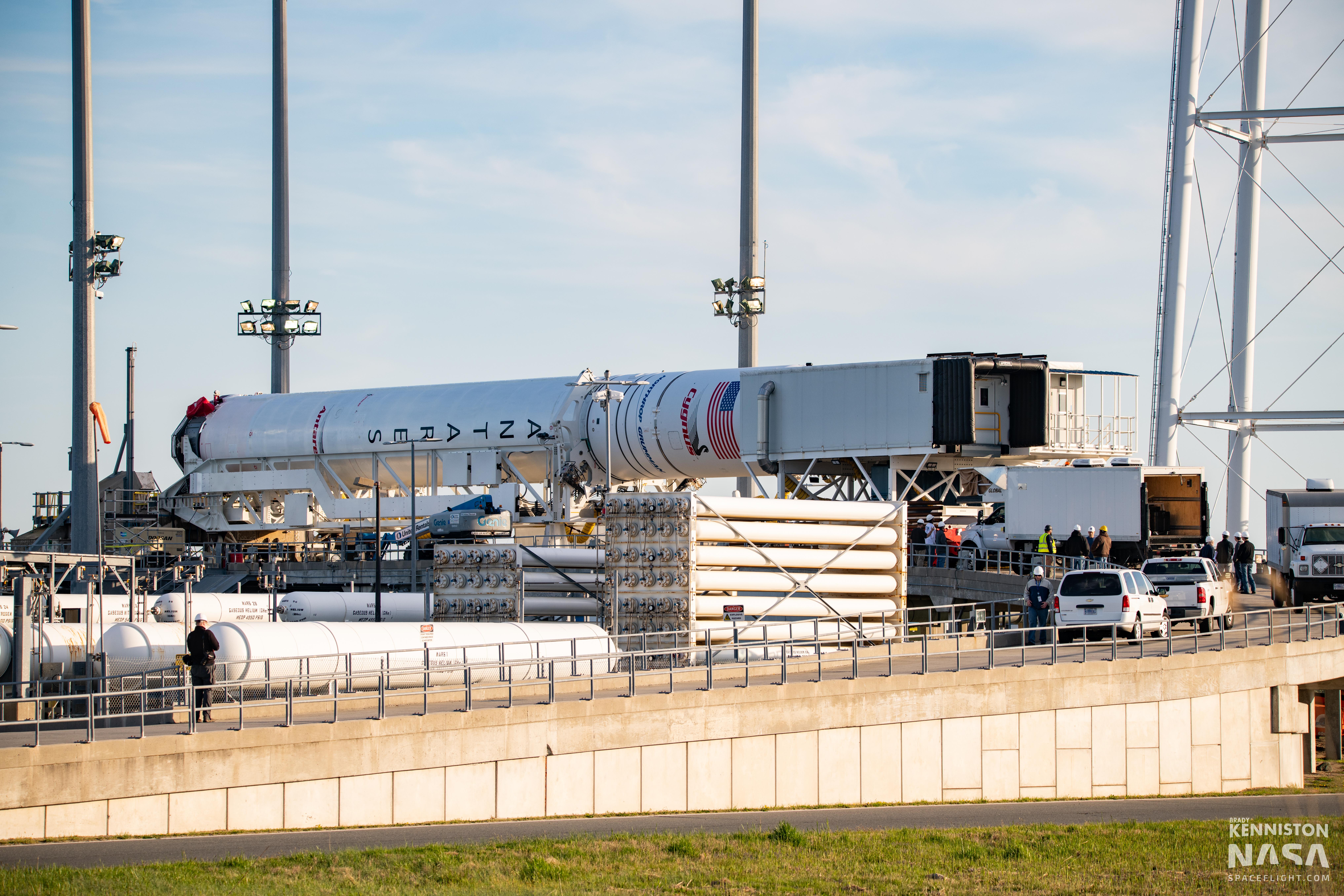 Without those modifications, the lines would have to be disconnected before Antares came horizontal and then reconnected again once it went vertical – which would have cost precious time in the 24 hours preceding launch.

In a one-on-one interview with NASASpaceflight’s Chris Gebhardt, Frank DeMauro, Vice President and General Manager of Space Systems Division at Northrop Grumman Innovation Systems, said, “[This] is the largest mission we’ve launched on Antares out of here at Wallops. It’s not the largest load we’ve launched on Cygnus. That was actually on an Atlas mission. But this is the heaviest Cygnus that we’ll be flying on Antares so far.”

Assuming all preparations continue, Antares will launch the NG-11 mission at 16:46:06 EDT (2046:06 UTC) today from the Mid-Atlantic Regional Spaceport on Wallops Island Virginia. 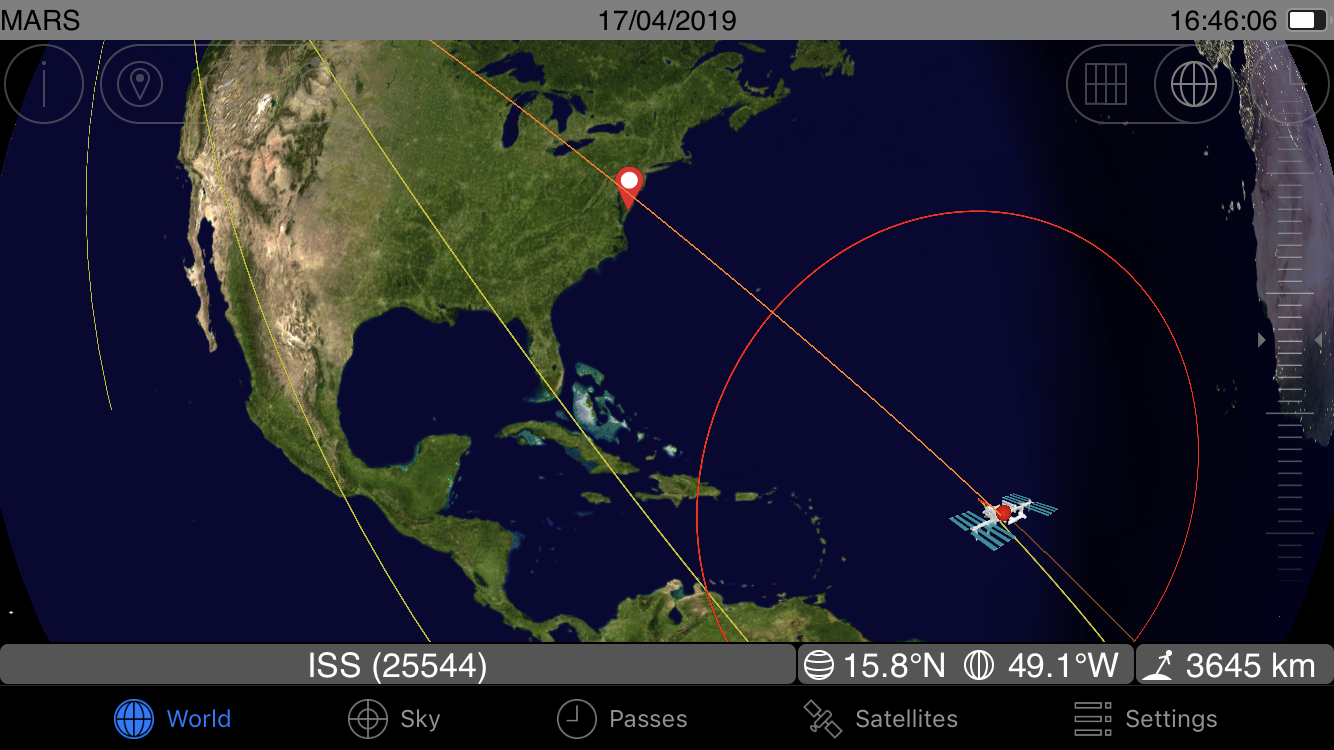 After lifting off, Antares will rise vertically for a few seconds before pitching to the southeast to begin a downrange track over the Atlantic Ocean.

At the time of launch, the International Space Station will be 3,645 km to the southeast of Wallops tracking southeast across the central Atlantic.

Antares has a five minute launch window, in which it can launch at any second of that window to begin its mission.

New beginnings as CRS1 contract comes to an end:

While NG-11 is the final flight of the CRS1 contract between NGIS and NASA, it is in many ways to beginning of a new operational era for Cygnus and Antares as well.

“When we started this program with the Space Act Agreement to develop Cygnus, and of course Antares was already under development at that time back in early 2008, and as we looked forward to the last CRS1 mission, it just seemed so far away,” said Mr. DeMauro.

“Over the years we’ve been flying these missions, they’ve become even more special. We’ve increased the capabilities of both Antares and Cygnus not only in terms of the amount of cargo we can fly but also the amount of science we’re able to support as well as the capabilities and the other things we can do with the vehicle such as the secondary missions that we fly.”

And those secondary missions are coming to forefront for NG-11 – beginning with the launch itself.

Shortly after orbital insertion is achieved via the Castor 30XL solid-propellant second stage, Cygnus will be released on its way to the International Space Station.

But for Antares, successfully dropping Cygnus off in its initial transfer orbit will not be the end of its mission.

For the first time, Antares will also deploy numerous satellites from its second stage after Cygnus separation.

In fact, the Castor 30XL second stage of Antares will deploy 61 cubesats on this mission – 60 ThinSats for the Virginia Commercial Space Authority and one NASA-sponsored 3U CubeSat called Student Aerothermal Spectrometer Satellite of Illinois and Indiana CubeSat (SASSI2).

Mission engineers load the final cargo into the @northropgrumman #Cygnus spacecraft onboard the Antares rocket at @NASA_Wallops Pad-0A ahead of the company's 11th resupply mission to @Space_Station. See more

In a one-on-one interview with Chris Gebhardt, Michael Bitzer, NG-11 Mission Manager for NGIS, related, “On the Antares side this is a unique [mission] for us in the fact that we are supporting Virginia Commercial Space Authority’s efforts in getting kids – in terms of STEM programs – involved in spaceflight.

“So we’re actually flying 60 of these ThinSats – a kind of DVD case sized spacecraft – for the first time that are being provided by anywhere from elementary schools all the way up to Universities.  So we’ll be flying that for the first time and hopefully the kids will get good data to watch for three or four or five days before they re-enter.

The 61 small sats are mounted to the top of the Castor 30XL second stage and are covered by Cygnus during the ride to orbit.  Once Cygnus is away, the small sats are then exposed to space and capable of being deployed.

The deployment system from the Castor 30XL is different from the two used on Cygnus.

“It is from a different provider, but it has been flown before,” stated Mr. Bitzer.  “Planetary System developed what they call the CSD, [Canisterized Satellite Dispenser]. And so we’ll be using that instead of the Nanorack deployer.” 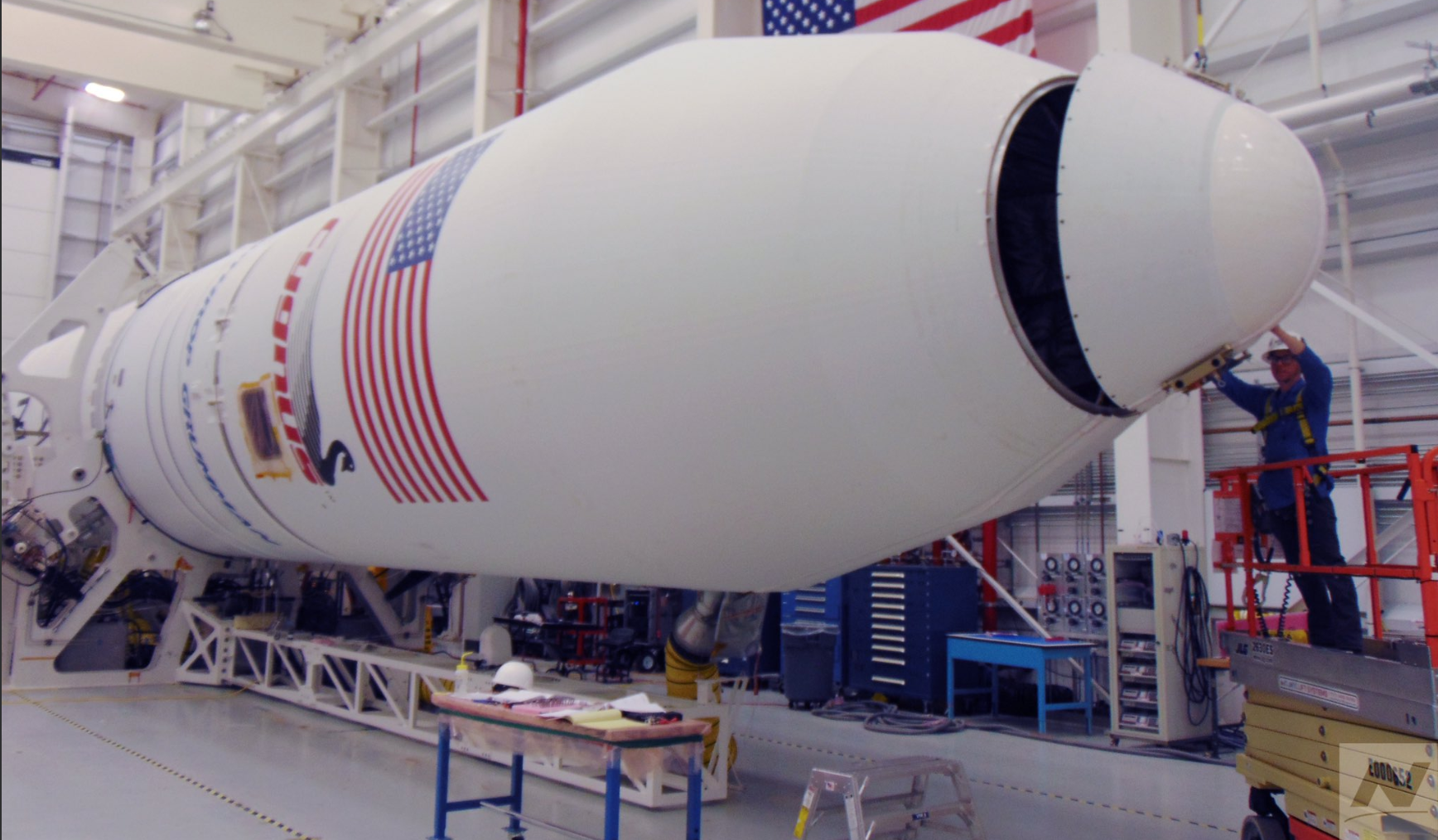 But if Antares’ ability to support late cargo load at the pad and deployment of satellites for the first time wasn’t enough, Cygnus will also debut several new capabilities on this mission.

After departing the International Space Station and deploying its series of cubesats, as we have seen on numerous flights before, the craft’s new capabilities will be tested extensively.

These include the first flight of a Control Moment Gyro (CMG) on Cygnus to maintain its attitude instead of using thrusters; the first long-duration post-ISS orbital stay for Cygnus on the magnitude of months, not weeks; and what is hoped to be the first time two Cygnus spacecrafts will be in orbit at the same time.

“Of course our primary mission is delivering the cargo and taking away the trash,” said Mr. DeMauro to Chris Gebhardt.  “And then after we leave the ISS after anywhere from a two to three month stay, we’ll enter our secondary mission phase.”

“Unlike all our previous missions and including the first part of this particular mission where we control the vehicle using all of our thrusters and the fuel – and of course that becomes a life-limiting component of the mission – we’re going to be flying a Control Moment Gyro, a CMG, and that will do the attitude control of the vehicle and we’ll just use the thrusters for orbit maintenance.”

For the CMG test, NGIS teams will monitor Cygnus to make sure the new CMG works with the control systems and avionics and prove how the interfaces are well-defined and the control algorithms correct and understood as well. 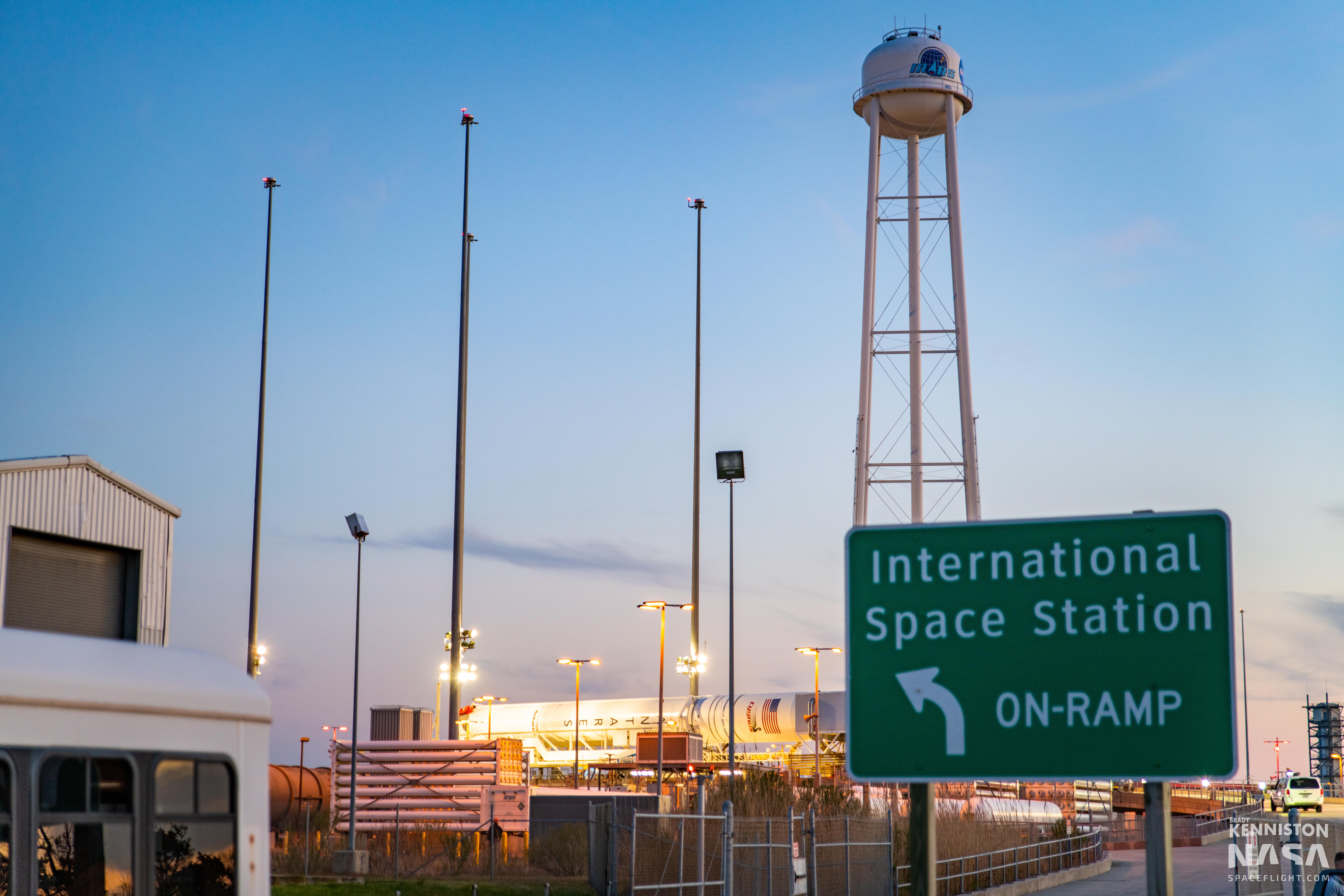 This test will be carried out during an extended period stay on orbit, something NGIS is keen to do with Cygnus to demonstrate its capability of staying on orbit for upwards of a year to serve as a free-flying scientific research platform and/or testbed for government and commercial entities.

“Most spacecraft operate in orbit for years, and of course Cygnus operates on the order of months. But it’s designed with its heritage to be able to operate for long periods of time in space and we want to demonstrate that capability as well,” added Mr. DeMauro.

To this end, NGIS must also demonstrate the ability to fly two Cygnus spacecraft in orbit at the same time, something that if all the tests for the NG-11 Cygnus bear out will occur when the NG-12 vehicle launches in the fall.

Per the current plan, if all the long-duration activities go well, NGIS will leave the NG-11 Cygnus in orbit until the end of the year so that its flight overlaps with the NG-12 vehicle.

“One of the things we want to get to on CRS2 [contracts], and we have every confidence we’ll get there, is the ability to offer – in addition to our cargo delivering capability – Cygnus as a scientific test platform or a test bed for other technologies or even for sensors for either government or commercial agencies to fly in orbit for an extended period of time.

“And to offer that capability we need to be able to continue flying cargo missions while we’re flying an extended Cygnus from a previous cargo mission.”

Having two Cygnus spacecraft in orbit at the same time will demonstrate not only the team’s ability to control the two crafts simultaneously but also validate NGIS ground systems hardware needed for such an enterprise both in Dulles and in Houston.