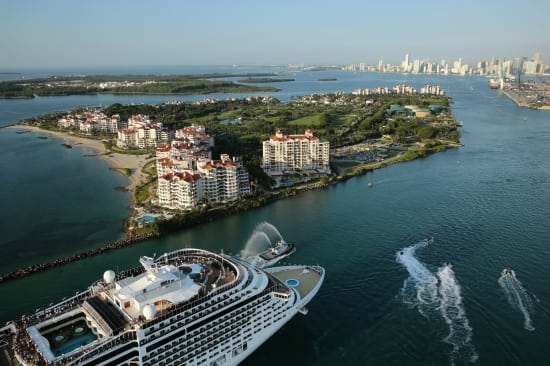 The global cruise line industry will host more than 30 million passengers in 2019, a first-time milestone breakthrough, according to a panel of executives from the world’s biggest cruise ship operators at the Seatrade event in Miami, Florida. Comparatively, cruise lines are catching up with the entire city of Las Vegas, which hosts 40 million tourists each year.

More passengers mean more demand for connectivity services and ‘connected’ experiences, according to Carnival Corporation President and CEO Arnold Donald. “We are a hospitality business. Technology helps us provide hospitality. Everything is going in this direction,” said Donald. “People want customized travel experiences. We were surprised how comfortable people were with sharing their data with us, in order to improve the experience.”

Pier Francesco Vago, Executive Chairman, MSC Cruises, spoke about the trend of bigger ships coming online over the next few years, which will only increase the demand for better technology on board. Vago said cruising has become a serious alternative to traditional vacation travel and is now much more of a global business than ever before. “There is an incredible word of mouth out there. We have a low penetration in the bigger holiday-making world. We have one percent penetration in Europe, for example,” he said.

Richard Fain, Chairman and CEO, Royal Caribbean International, believes the perception that high-speed connectivity is something just for the millennial cruiser is wrong, and that they are seeing across-the-board demand for every demographic. “It is no longer something that is an extra,” he said.

Frank Del Rio, President and CEO, Norwegian Cruise Line Holdings believes that there will be no imminent slowdown in the industry, and that the upward surge over the next few years will even create room for more competition. “In order have a vibrant industry, you need new entrants,” he said. “Competition is good for everyone. The industry has got to concentrated. There are new competitors. They are introducing new wrinkles into their offerings.”

Del Rio said that Norwegian, like most of the major cruise operators, is investing billions of dollars in new ships and supporting infrastructure inland. “We are introducing new ports, new islands, and new terminals,” he said. “The battlefront is not just at sea, but now also on land. Over time all ships get bigger, A small ship today is now under 1000 passengers. As we invent new and innovative things to do on ships, you need more space, you will see this continue. It is still a very efficient way to move 5000 people compared to say an aircraft.”

The panel also touched upon sustainable cruising and reducing global carbon footprints. Fain said the industry needs to do better in terms of talking about these issues, and correcting misperceptions. “There is no clear trend in terms of the size of ships,” he said. “The trend is to continue to improve, not to get bigger. When you say things about carbon footprint, the larger the ship, there is a lesser carbon footprint. Most people will tell you that the larger ships are less crowded. One of the reasons we are doing well amongst the millennials, is they don’t start with pre-conceptions. All of us publish extensive environmental reports. We have a strong economic impact throughout the world. The economic aspect is important. We need to put safety and sustainability at the top of the industry.”

The post Cruise Line CEOs See No End to Passenger Growth appeared first on Via Satellite.