Meanwhile, the Station’s critical supplies – known as consumables – are in excellent shape and well stocked ahead of this Progress mission.

Progress MS-11 will be the first Russian resupply mission of 2019 to the International Space Station.

The spacecraft will launch on a Soyuz 2.1a rocket and will mark the:

The Progress MS-11 spacecraft bears a serial number No. 441 and was fueled with compressed gases as well as engine and thruster propellants on 19 March following a technical management meeting which cleared the craft for final launch processing.

On 29 March, the craft was mated to its stage adaptor (that will attach it to the top of the Soyuz 2.1a rocket) and was encapsulated inside its payload fairing.

The following day, Progress MS-11 was taken by rail to the integration hanger where it was mated with the Blok-I upper stage of the Soyuz rocket.

The Blok-I stage was then mated to the top of the Blok-A core stage.

The Soyuz 2.1a rocket then rolled out to Site 31/6 at Baikonur and was taken vertical at the pad on 1 April. 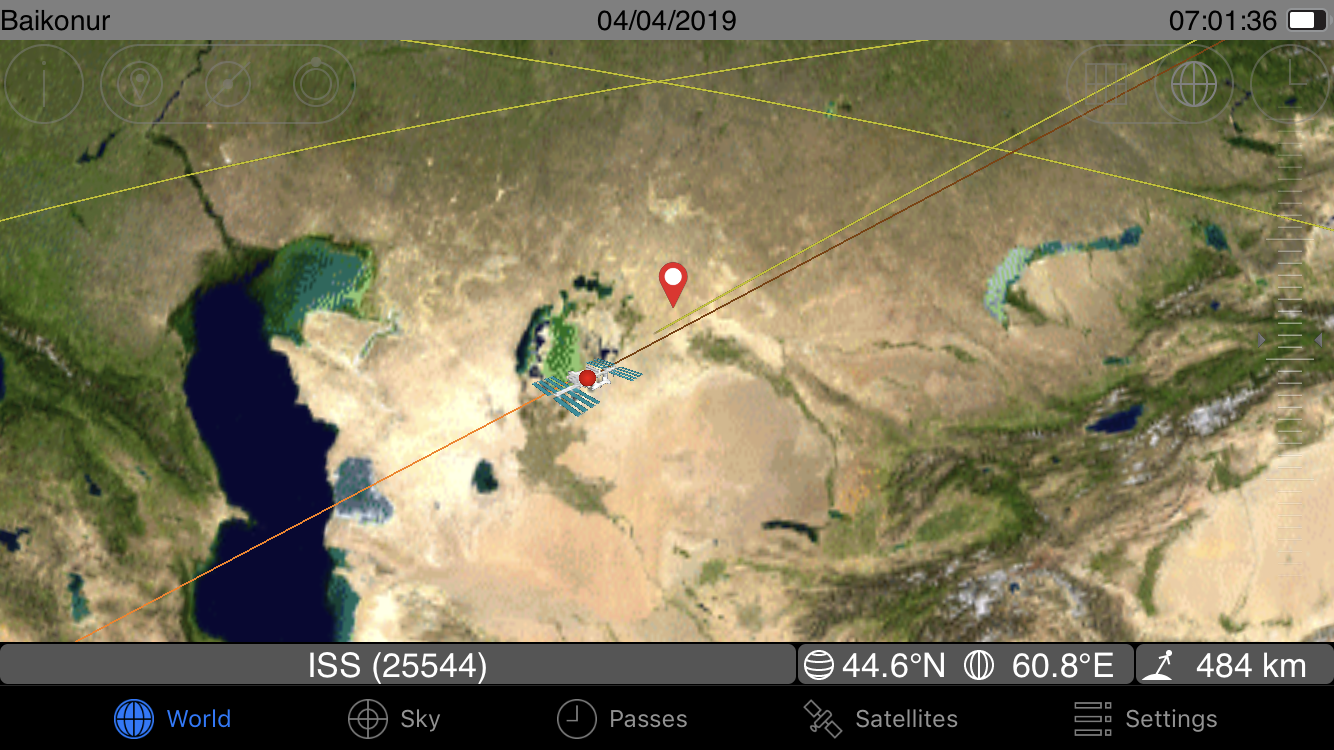 Location of ISS relative to the Baikonur Cosmodrome at the time of the Progress MS-11 launch. (Credit: GoISSWatch app)

The single-second launch window is designed to allow Soyuz 2.1a to steer Progress MS-11 into a pinpoint precise initial orbit so the craft can rendezvous and dock with the Station within 3 hours 23 minutes of launch.

If an issue arises during the count that requires a scrub, a recycle to another day will likely force Progress to fly a two-day orbital rendezvous to the ISS due to phasing/alignment on the new launch day.

If all goes to plan, Soyuz 2.1a will deposit Progress MS-11 into a roughly 200 km circular orbit.  The craft’s orbital parameters will quickly be verified by ground controllers once Progress’ communication antennas and solar arrays deploy after separation from the Blok-I upper stage of the Soyuz.

Once the orbit is verified and the “go” to perform the super fast-track, 2 orbit rendezvous is given, Progress will execute a series of burns to raise its orbit to the 408 x 416 km orbit of the ISS.

Progress will then perform an automated docking with the Station’s Pirs docking compartment at 10:25 EDT (1425 UTC), just 3 hours 23 minutes after launch.

At the time of anticipated docking, the Station and Progress MS-11 will be 416 km above the central coast of eastern Australia tracking southeast toward New Zealand.

Progress MS-11 will ferry 3,412 kg of cargo and supplies up to the Station.

Specifically, the craft will deliver:

Even without these supplies, the Station is extremely well stocked.

“Right now on Station, [the limiting consumable] would be food, and current data for this moment (no additional resupply) has it with adequate reserves until the end of October 2019,” noted NASA in response to a NASASpaceflight inquiry.

This means that even if Progress MS-11 were to fail to reach the ISS, the Station has enough supplies to support a crew of six out to October 2019.

In space, water is precious: Every drop is conserved.

A new pre-treatment that makes water recycling more efficient could increase access to safe drinking water on Earth, too.

It's one of our "Spinoffs of Tomorrow," developed by us, ready for you. https://t.co/IeKmklwks7 pic.twitter.com/2BW9BuuZ7u

A Northrop Grumman Cygnus (NG-11) and SpaceX cargo Dragon (CRS-17) are set to launch on 17 April and 25 April, respectively, with more supplies and experiments for the Station.

Currently, the major consumables on Station would run out (assuming a six person crew and no more resupply missions) as follows: