Space Launch System (SLS) Core Stage prime contractor Boeing reached a long-awaited milestone this week with completion of standalone work on the engine section for the first vehicle. The most complex section of NASA’s new rocket stage is well behind more than one schedule revision, and because it is the critical path in the schedule the delays have pushed some estimates for the vehicle’s first launch into 2021.

While the element proceeds immediately into the next phase of integration and testing with its boattail, a series of reviews of Core Stage production are being conducted by upper NASA management to speed up the schedule. Following last October’s Inspector General report, independent consultants were brought in to help with an internal assessment of how to address the report’s recommendations.

After NASA recently concluded the June, 2020 launch date commitment for Exploration Mission-1 (EM-1) was not achievable, one study was started to look at replacing SLS on EM-1, while additional reviews were started to look for more aggressive ways to compress the SLS schedule to its first launch.

The engine section was moved on March 20 from its integration area in Building 103 at the Michoud Assembly Facility (MAF) in New Orleans to the adjoining Building 110, also known as the Vertical Assembly Building (VAB). The long-awaited move came after the completion of a significant phase of assembly, where all the equipment, wiring, tubing, and insulation internal to the element was installed.

There is still more integration and testing to do; the next step is to bolt the boattail assembly on the bottom, connect up additional systems, and begin a series of functional tests of the mated combo. The boattail assembly is a streamlined extension for the bottom of the engine section and also includes a downward-facing base shield that provides protection from the heat generated during launch and ascent.

The location of the boattail (BT) is shown in two graphics. It attaches to the bottom of the engine section barrel; as seen in the right-hand graphic, the RS-25 engine powerheads sit in the boattail volume just below engine section. Credit: NASA.

As more and more of the equipment was put in place in the aft compartment of the stage, the confines of the controlled work area got more constricted. “That becomes increasingly a bigger challenge because the more stuff you put in the engine section the more torturous path it is for people to get in there,” Pat Whipps, NASA’s SLS Stages Office Resident Manager at MAF, said during a February 28 media event there.

“We used to be able to work on four levels at once and now you’re down to only a dozen people.  It may get even less than that, but you still want to be as efficient as you can.”

Just about the last hardware to be installed inside were the avionics boxes that work with the vehicle flight computers elsewhere on the stage to control things like propellant and pressurization flows, hydraulic systems, and thrust vector control hardware. Most of the work in the weeks leading up to completing standalone integration was testing all the installed hardware.

All the wiring routed inside the engine section had to be tested to verify its continuity after installation. Once orbital tube welding was completed to seal the different systems, they all had to be tested. 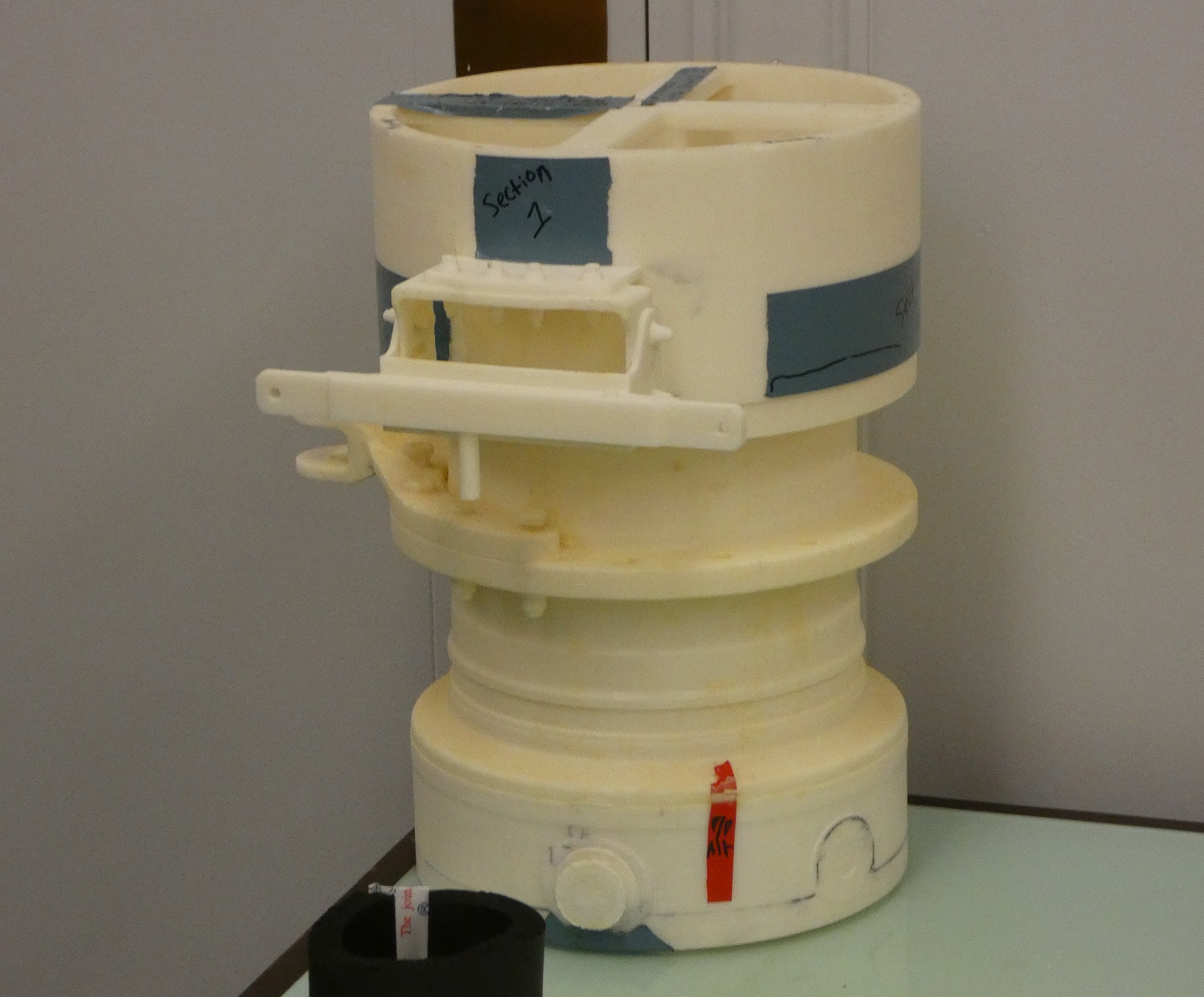 A 3-D printed model of a cryogenic part in the engine section. Molds are also 3-D printed to fit around bolted flanges like this and then foam insulation is poured into the mold and allowed to set. Credit: Philip Sloss for NSF/L2.

Final applications of foam insulation for a few of the sections of cryogenic ducting inside were held until traffic from technicians working in areas around them subsided. 3-D printed molds are placed around parts with complex geometries and the foam is poured into them to cure.

The engine section continues to be the pacing item in the schedule to complete assembly and testing of Core Stage-1 (CS-1), the first flight unit. It has taken much longer than expected to get to this point, delaying downstream work and pushing estimates of when the overall SLS rocket will be ready for its first launch into 2021.

With the Administration’s desire to fly the EM-1 test flight before the end of 2020 and a recent internal assessment concluding that the stage’s integration and test schedule wouldn’t support that, the agency is aggressively looking for new options to get back on schedule. The first new option discussed in public was a study to assess the feasibility of using commercial launch services to launch EM-1 instead of SLS, but NASA is also looking at new options to shorten the SLS schedule.

NASA’s periodic assessments had shown that the schedule was sliding not long after the last baseline commitment for EM-1 was announced in November, 2017; however, new assessments of the SLS Core Stage schedule began in October in response to recommendations from an audit by NASA’s Office of Inspector General (OIG). The report was publicly released on October 10, but a draft was sent to Human Exploration and Operations Mission Directorate (HEOMD) management in late August for review.

The Congressional submission of NASA’s FY 2020 budget proposal released on March 18 highlighted the schedule-related aspects of the response as the Administration also looks for ways to accelerate the SLS schedule for EM-1. “In October 2018, the SLS program began an assessment of core stage production,” the report says.

“The assessment included representatives with experience in aerospace manufacturing and covered production schedule risks, risk mitigation approaches in work, and recommendations for additional schedule risk mitigations and corrective action and was presented to HEO (Human Exploration and Operations) in February 2019.”

“On March 4, 2019, HEO chartered an assessment of other activities planned to achieve a launch in 2020,” it adds. “Specifically, this assessment will evaluate alternate approaches for hardware processing and facilities utilization for key components.”

“The goal of this activity is to maintain an early as possible launch date.”

The budget submission noted this second assessment was scheduled to be completed on April 15. Focusing on schedule, an obvious candidate for an “alternate approach” is the Stage Green Run test campaign long in planning for the Stennis Space Center.

The Green Run campaign was planned both to acceptance test the stage and verify Boeing and NASA’s analytical modeling of how the rookie SLS stage performs with veteran Space Shuttle Main Engines, now called RS-25s. Core Stage-1 is the first working stage article, and six months was allocated in the schedule to run the stage through activities being performed for the first time in the program, such as cryogenic propellant loading, and a full, eight-minute flight duration firing.

Eliminating the Green Run testing (which could take longer than estimated), skipping the trip to Stennis, and taking the new stage directly to Kennedy Space Center would significantly compress the schedule. Prior to completion of the OIG audit, NASA had studied substituting a brief, five-second static fire of the Core Stage on the launch pad at KSC for the eight-minute long full duration firing at Stennis; the stage would be stacked with its SLS Boosters on the Mobile Launcher for the test, also referred to as it was in the Space Shuttle Program as a Flight Readiness Firing (FRF).

Although an FRF may not completely achieve Green Run development objectives, it would significantly improve the schedule. Additional structural dynamics testing in the integrated launch processing schedule could also be traded for more schedule with NASA looking to fly as early as possible.

Following the completion of the second HEOMD assessment, the budget submission noted another review by NASA’s Chief Financial Officer to look for additional ways to speed up the schedule. “After completion of the HEO assessment, an independent schedule risk review led by the NASA Office of the Chief Financial Officer, set to begin mid-April 2019, will assess the proposed new plan to include: the integrated, detailed schedule and associated risk factors ahead of EM-1; considering technical complexity.”

Next steps being rewritten

During much of this first Core Stage assembly and production flow, Boeing and NASA have looked at ways of rearranging the original sequence of tasks to adjust to issues such as development of manufacturing and production processes, establishing a parts supply chain, and qualification of subsystem components. In addition to shuffling tasks, the flow of hardware has also been shuffled through common areas at MAF like the VAB, with Boeing and NASA officials there currently juggling hardware for Core Stage-1, structural test articles, and Core Stage-2.

Since the post-OIG report internal assessment started in October, a number of additional changes were made to the workflow for the remainder of Core Stage-1 assembly, integration, and test. Even before the engine section moved into Cell A, the next sequence of steps was reworked. 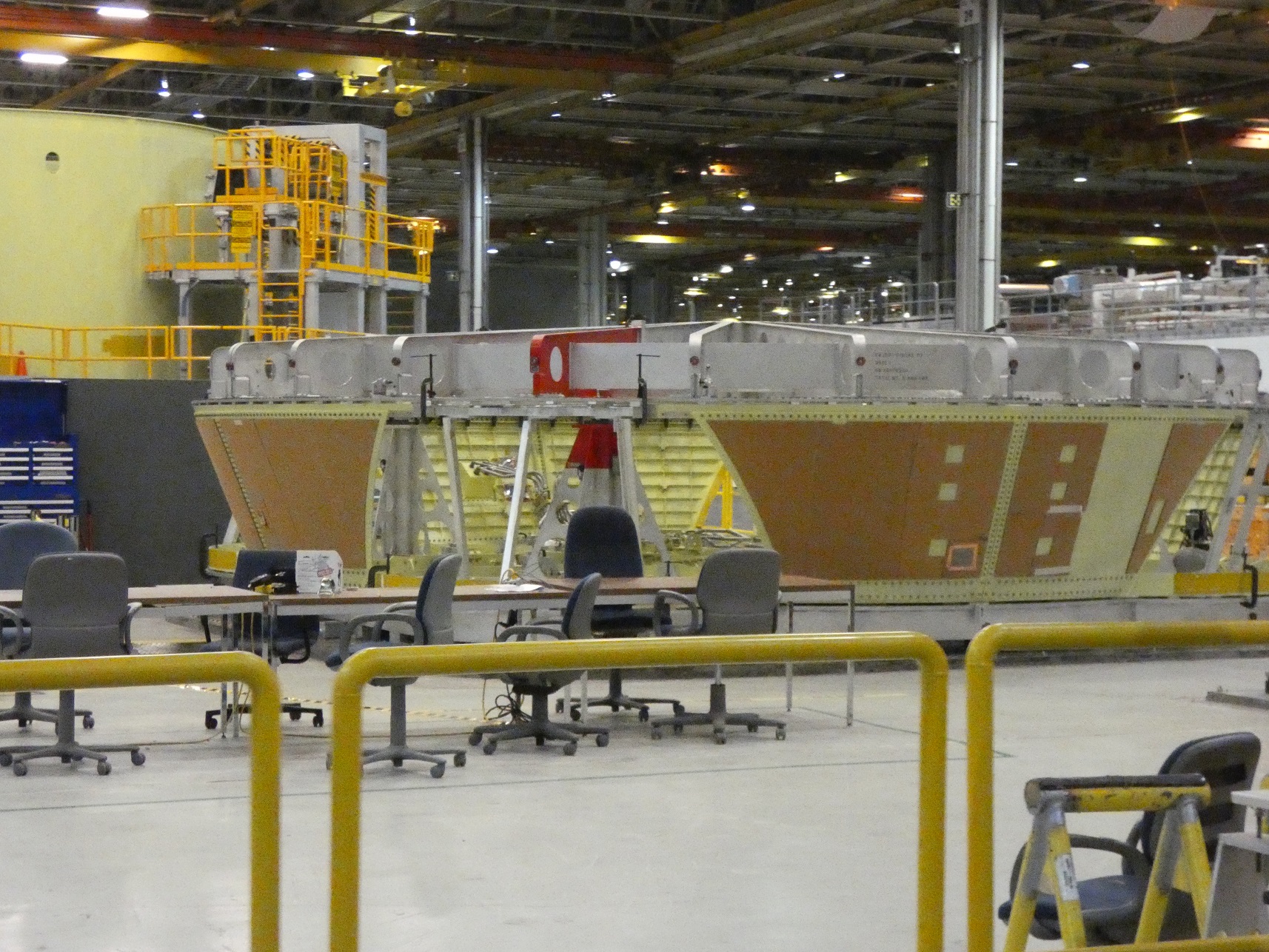 The boattail assembly for the first Core Stage at MAF in August, 2018. Credit: Philip Sloss for NSF/L2.

“We have procured some new tooling (delivered today and currently being assembled) that enabled a plan to reduce the work scope for the ES/BT (Engine Section/Boattail) in Cell A,” Steven Ernst, Core Stage Engineering Support Manager for Boeing, said in a March 7 email. “The ES/BT will be mechanically mated then moved from Cell A back into Bldg. 103 for the completion of integration and testing.”

The boattail moved into Cell A first on March 19, with the engine section moving into the Building 110 aisle on March 20 to start lifting activities that were underway on March 21. The new tooling allows the mated assembly to be moved and allows for multi-level access platforms to be placed around it; the improved access is expected to allow more work to be done in parallel.

Clearing Cell A also allows final assembly of the fourth and final structural test article for the liquid oxygen (LOX) tank to be completed in parallel with the first part of engine section functional testing. Stacking of two simulators to the LOX tank qualification article needs time in both stacking cells in Building 110.

Additional wire harnesses and tubing need to be connected between the engine section and boattail after they are bolted together in Cell A and moved back into Building 103. Functional testing of all the engine section equipment is done in parts. 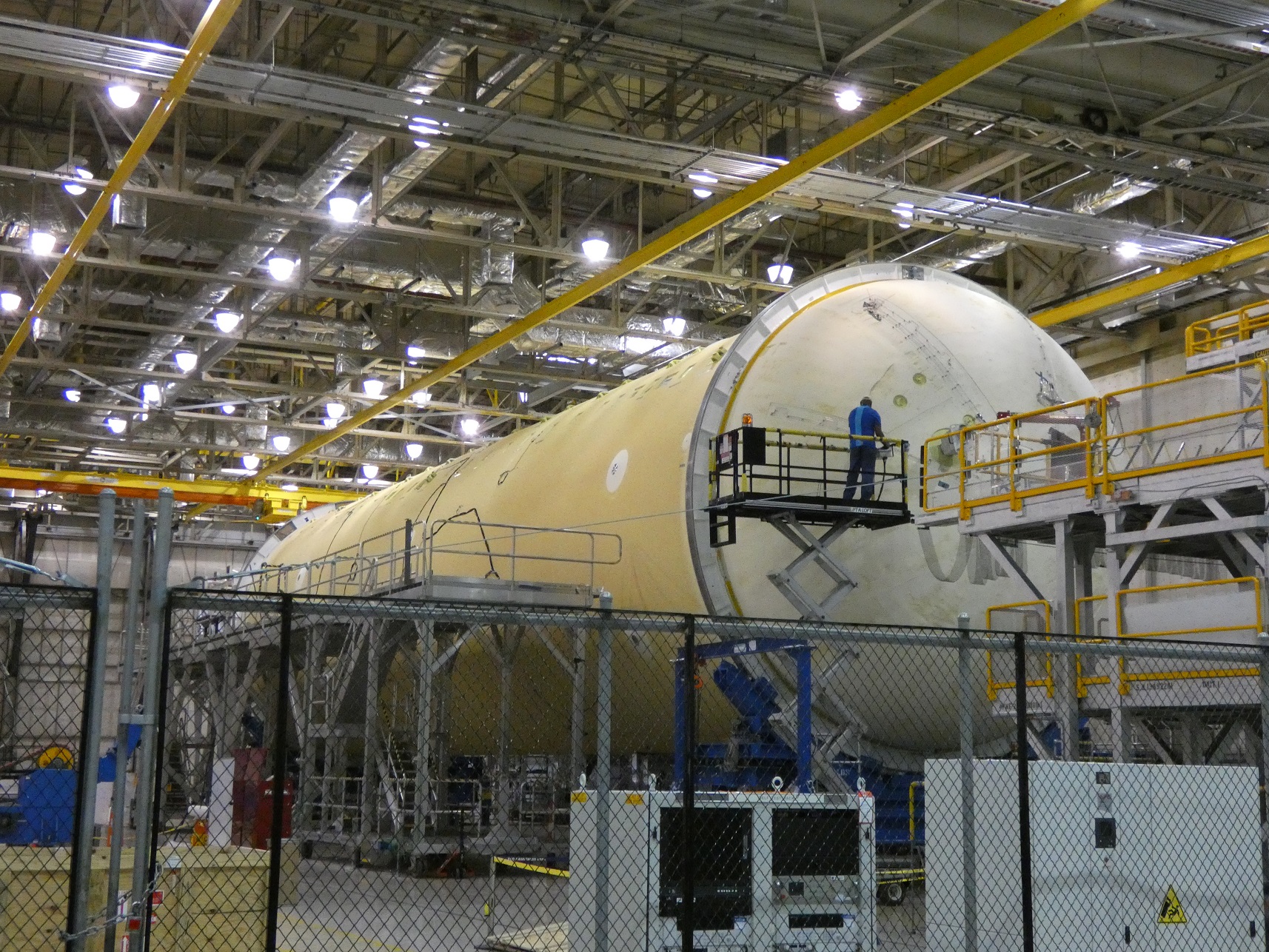 “So we go into Cell A, we’ll stack with boattail, we have some integration to do once we have boattail on and once we get that complete we’ll be able to do a portion of the functional testing for engine section,” Jason Grow, SLS Core Stage Lead Propulsion Engineer for Boeing, said.

“After that portion is done we’ll bring hydrogen tank on, after the hydrogen tank is on, we have a little bit more integration to do and then we’ll be able to finish out functional testing.” The baselined aft join mates the boattail to the bottom of the engine section and the liquid hydrogen (LH2) tank to the top.

The LH2 tank is currently in the Final Assembly area for the current round of standalone integration work. With extra time due to the delayed completion of engine section, work to attach the two feedlines that run down the outside of the LH2 tank was moved up. The work is normally baselined for Final Assembly, the last part of the production sequence.

All of the testing and checkout requirements to complete assembly of the stage will be met, but with the extra oversight of production still more changes to when and where work is performed are expected.