United Launch Alliance will deploy the tenth Wideband Global Satcom satellite for the US Air Force Friday. Riding atop a Delta IV rocket, WGS-10 will lift off from the Cape Canaveral Air Force Station during a 129-minute window that opens at 18:56 Eastern Daylight Time (22:56 UTC).

The WGS-10 satellite is the latest part of a constellation of highly-capable communications satellites that serve the armed forces of the United States and its allies. WGS-10 carries Ka-band and X-band transponders with a total 8.088 gigahertz of bandwidth – offering downlink speeds of up to 11 gigabits per second.

Boeing was initially awarded a contract for two WGS satellites, with an option for a third, in 2001. This option was taken up in 2003, with two more satellites added to the order in 2006. The following year Australia bought into the program and funded the construction of a sixth satellite. Another four satellites were ordered between 2010 and 2012, including WGS-10. The Air Force is currently in the process of procuring two further satellites, WGS-11 and 12, however a contract has not yet been signed.

WGS satellites are based around Boeing’s BSS-702 bus, with each satellite equipped for a service life of at least fourteen years. The satellites are powered by solar panels, with propulsion coming from a liquid-fuelled R-4D-15 High Performance Apogee Thruster (HiPAT) and four Xenon-Ion Propulsion System 25 (XIPS-25) stationkeeping thrusters. Each satellite has a mass of about 6,000 kilograms (13,200 lb). 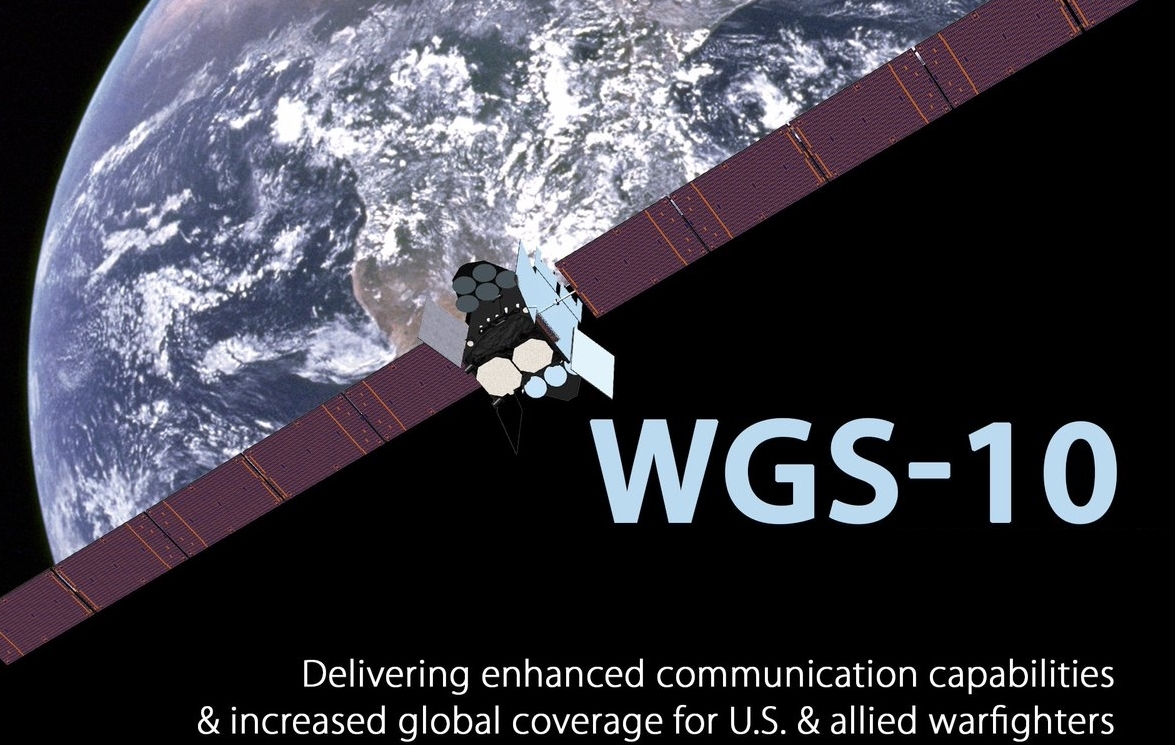 As WGS launches have continued, the capabilities of the satellites have been upgraded. The first three spacecraft were built to the Block I specification, while from the fourth spacecraft onwards the Block II spacecraft featured an RF bypass function to allow for extremely high bandwidth operations – such as relaying data from unmanned aerial vehicles (UAVs) on reconnaissance flights. WGS-7 was the first Block II follow-on satellite incorporating upgraded digital channelisers that almost double the satellites’ bandwidth.

WGS-10 will be carried into orbit by United Launch Alliance’s Delta IV rocket, which will be flying in its Medium+(4,5) configuration. Friday’s launch is expected to be the last time that this version of the Delta IV – which has been used exclusively to launch WGS satellites – flies.

Delta IV was designed by McDonnell Douglas and was developed by Boeing under the US Air Force’s Evolved Expendable Launch Vehicle (EELV) program after the companies merged in 1997. To assure access to space, the EELV program saw two rockets developed to share and compete for military launch opportunities. Alongside Boeing’s Delta IV, Lockheed Martin’s Atlas V rocket was also selected for development. Boeing was initially awarded the lion’s share of the missions, however following revelations of corporate espionage several flights were re-awarded to Atlas.

A feature of the two EELVs was the ability to fly in multiple different configurations, scaling the rocket to the payload that it was to launch. Small, Medium and Heavy versions of both Atlas V and Delta IV were designed – although only the Medium versions and the Delta IV Heavy were ever built. A series of intermediate configurations were also designed for both vehicles, adding solid rocket boosters and modifying the rocket’s upper stage to adapt it for payloads too heavy for the medium version, but not heavy enough to justify using the Heavy. For the Delta IV, these configurations are known as Medium+.

Delta IV first flew in November 2002, three months after Atlas V. In December 2006, as part of the settlement to their corporate espionage dispute, Boeing and Lockheed Martin agreed to merge their launch vehicle divisions and formed United Launch Alliance, who are now responsible for the manufacture and operation of both Atlas V and Delta IV. While ULA initially operated both rockets alongside each other, they have now begun to phase out Delta IV as they look towards their next generation of rockets. Their new rocket, Vulcan, is due to begin flying in 2021 and will eventually replace both the Atlas and Delta product lines.

Vulcan 544 – as envisioned by Nathan Koga for NSF/L2

Until Vulcan comes on line, ULA has been standardizing on the Atlas V for medium-class launches, with only the Delta IV’s Heavy configuration being retained to accommodate payloads that Atlas is unable to lift. An upgraded Vulcan, with the Advanced Cryogenic Evolved Stage (ACES) upper stage will replace the Heavy in the mid-late 2020s. Friday’s launch is the penultimate medium-class Delta IV launch remaining on ULA’s manifest – July’s GPS launch will be the final flight of the Delta IV Medium+.

Delta IV is designed around the Common Booster Core (CBC), a modular rocket stage fuelled by liquid hydrogen and liquid oxygen, with an Aerojet Rocketdyne RS-68A engine providing thrust. In the rocket’s Medium configuration, a single CBC serves as the rocket’s first stage, while the Medium+ versions augment this with two or four GEM-60 solid rocket motors. Delta IV Heavy uses three Common Booster Cores strapped together, with the center core throttled-down at launch so it can continue burning after the other two cores have burned out and separated.

Shadows retreating across the #DeltaIV as the MST rolls back. #WGS10 @NASASpaceflight @ulalaunch pic.twitter.com/dsAzQLV5Il

The Delta Cryogenic Second Stage (DCSS) is powered by an RL10B-2 engine and also burns liquid hydrogen and oxygen. Versions of the DCSS with diameters of four and five meters (13 and 16 feet) have been used: the former with the Medium and Medium+(4,2) configurations, and the latter with the remaining Medium+ versions and the Delta IV Heavy. The Delta IV Medium+(5,4) that will perform Friday’s launch has a single Common Booster Core, four GEM-60 solid rocket motors, and a five-meter DCSS. Under the continuous numbering of Delta launches that began with NASA’s Thor-Delta vehicles in the 1960s, this will be Delta 383.

Delta IV launches take place from Space Launch Complex 37B (SLC-37B) at the Cape Canaveral Air Force Station and Space Launch Complex 6 (SLC-6) of the Vandenberg Air Force Base in California. As Friday’s launch is targeting a low-inclination geosynchronous transfer orbit, the rocket needs to fly to the East and must, therefore, be launched from the East Coast and SLC-37B. 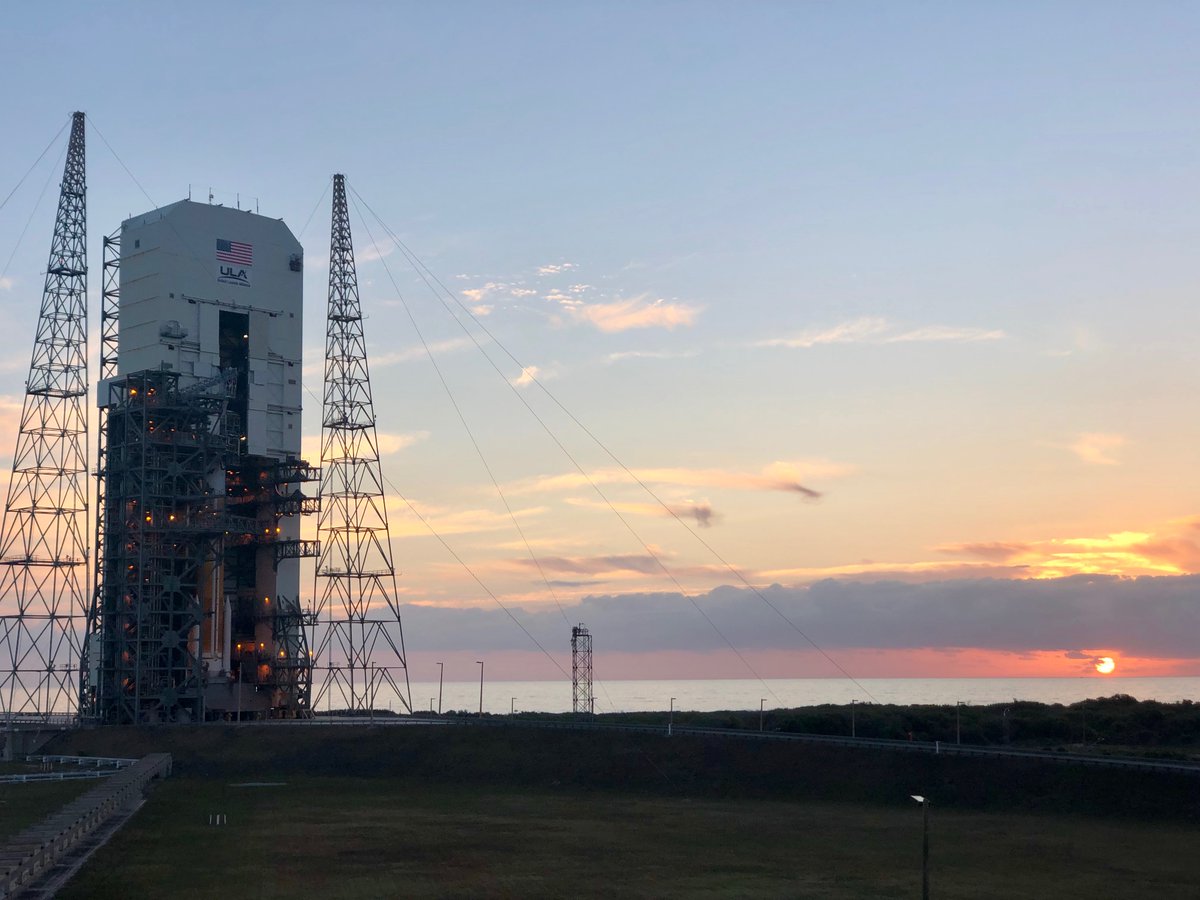 Delta IV at the launch site – via ULA

Complex 37 was originally built in the early days of the Apollo program to support low Earth orbit missions using the Saturn I rocket, which would have been flown prior to and after the project’s Lunar missions.

Two pads were built – 37A and 37B, with a shared mobile service structure that could be positioned for access to a rocket on either launch pad. SLC-37B supported six Saturn I launches, beginning with the rocket’s first orbital launch in January 1964, and two flights of the upgraded Saturn IB vehicle. The last of these was the Apollo 5 mission, an unmanned test of the Lunar Module in low Earth orbit. A third Saturn I launch pad at the nearby Launch Complex 34 (LC-34) was used for the first four suborbital Saturn I launches, and for flights of the Saturn IB with the Apollo Command and Service modules – including the manned Apollo 7 mission.

NASA’s Apollo Applications program called for Complex 37 to be reactivated after the Apollo lunar landings, to allow a variety of further missions utilizing Apollo hardware in Earth orbit. This was eventually cut back to just the Skylab space station and later the Apollo-Soyuz mission, and with the reduced volume of missions NASA opted to convert a Saturn V mobile launcher at Launch Complex 39 for the smaller Saturn IB, instead of reactivating its own launch complexes. LC-37 was mothballed, and later demolished during the 1970s. The site was not used again until Boeing chose it for the Delta IV.

Friday’s launch will be the thirty-ninth flight for the Delta IV. The launch will begin with ignition of Delta 383’s first stage RS-68A engine with about 2.7 seconds remaining on the countdown clock. At zero, the four GEM-60 boosters will ignite and Delta will lift off, beginning the journey into orbit. After clearing its launch pad, Delta will execute a series of pitch, roll and yaw maneuvers beginning 5.8 seconds after liftoff to put it onto the correct trajectory for geosynchronous transfer orbit.

A little over 35 seconds after liftoff, Delta IV will reach Mach 1, the speed of sound. At 47.2 seconds into its flight, the rocket will pass through Max-Q, the area of maximum dynamic pressure. This is the point in Friday’s launch at which the rocket will experience the greatest stress from aerodynamic forces, as a result of the combined effect of its increasing velocity, and the outside air density which decreases as the rocket climbs.

Delta 383’s solid rocket motors will burn out and separate in pairs. The first two – motors 3 and 4 – are expected to burn out 93.4 seconds into the mission, with the second pair following a second later. The first pair of boosters will separate at 100 seconds mission elapsed time, with the second booster separation event expected after another 2.4 seconds.

Once it reaches space, Delta IV will no longer need its payload fairing – the structure at the nose of the rocket which is used to protect WGS-10 from the atmosphere during ascent. This will be jettisoned three minutes and 19 seconds into the flight, separating into two halves that fall away from the rocket as it continues toward orbit. Booster Engine Cutoff (BECO) – the shutdown of the Common Booster Core’s engine after it has depleted its propellant – is expected at three minutes and 55.8 seconds after launch.

The spent first stage will separate six and a half seconds after cutoff, with the second stage’s RL10B-2 engine deploying its extendable nozzle to prepare for its own startup. This engine will be lit thirteen seconds after staging, to begin the first of three planned burns during Friday’s mission.

The first burn will last fifteen minutes and 14.3 seconds, placing Delta and its payload into an initial parking orbit. Exactly ten minutes later the RL10 will ignite again for its second burn – this three-minute, 20.4 second burn will inject WGS-10 into its transfer orbit. The satellite will separate from the launch vehicle four minutes later, at 36 minutes and 50 seconds mission elapsed time.

At separation, Delta and WGS-10 will be in an elliptical geosynchronous transfer orbit with a perigee of 433.9 kilometers (269.6 miles, 234.3 nautical miles) and an apogee of 44315.6 kilometers (27536.4 miles, 23928.5 nautical miles), inclined at 27.0 degrees to the equator and with an argument of perigee of 178.0 degrees. This is a supersynchronous transfer orbit, taking WGS-10 slightly above the geostationary belt, which reduces the amount of fuel that the satellite needs to use to raise its orbit. WGS-10 will perform a series of maneuvers under its own power to reach its final slot in geostationary orbit.

Delta’s upper stage will make its third and final burn 35 minutes and 10.2 seconds after spacecraft separation. Lasting just ten seconds, this will deorbit the stage, placing it on course to re-enter the atmosphere over the Pacific Ocean a little under eleven hours later. The upper stage will burn up when it re-enters the atmosphere, with any surviving debris falling harmlessly into the sea. The deorbit burn is performed to ensure that as little unnecessary debris is left in orbit as possible – since the stage serves no further useful purpose after deploying its payload.

Friday’s launch is the second of the year for United Launch Alliance and its Delta IV, following a successful mission for the National Reconnaissance Office in January which deployed a reconnaissance satellite via the Delta IV Heavy. Delta’s next launch is currently planned for late July, with the final Delta IV Medium+ vehicle deploying a Global Positioning System (GPS) navigation satellite. Before then, ULA’s next launch will use an Atlas V rocket to carry out the first uncrewed test flight of Boeing’s Starliner spacecraft, which is intended to conduct future Commercial Crew missions to the International Space Station. This is currently slated to fly no earlier than the end of April.