Arianespace’s Soyuz ST-B rocket is set to launch the first satellites that will act as pathfinders to a huge satellite constellation for OneWeb that is aimed at providing full global internet coverage. The launch is set to take place in a window that opens at 21:37 UTC at the European Spaceport in French Guiana.

The upcoming Flight VS21 will mark the 21st liftoff of Soyuz from French Guiana since this medium-lift launcher’s 2011 operational debut at the Spaceport.

The rocket has suffered delays in the path to this launch, first with the discovery of a pinhole in the Fregat upper stage that has since been repaired. Then, a small slip occurred as Russian officials checked for commonality with the problem suffered by a Soyuz 2-1b launch of EgyptSat-A that successfully deployed the satellite but had problems during third stage flight.

“Based on the positive results of analyses performed with Russian space authorities responsible for a Soyuz launch, Arianespace has taken the decision to resume preparations for its Flight VS21 OneWeb F6 mission at the Guiana Space Center,” Arianespace confirmed, as it gave the green light for the launch to take place.

The Soyuz ST-B is based on the Soyuz-2-1a rocket, incorporating modifications specific to using Arianespace’s launch site, the Centre Spatial Guyanais (CSG), located near Kourou in French Guiana. Soyuz-2-1a is itself one of three modernized versions of earlier Soyuz rockets, derivatives of Sergei Korolev’s R-7 missile that have been used for Russian (and formerly Soviet) satellite and crewed spaceflight launches since the 1960s.

Soyuz is a three-stage rocket, although the first and second stages fire together at liftoff. To reach higher orbits or perform more complex missions, Soyuz can be used in conjunction with an upper stage. For this mission a Fregat-M will be used to insert the satellites into orbit.

Fregat is the most common type of upper stage flown on Soyuz; it is based on the propulsion systems of the Soviet Union’s late interplanetary probes and can restart its engine multiple times over a lengthy extended mission to ensure delivery of its payload into the required orbit.

The Soyuz launch pad, Ensemble de Lancement Soyouz (ELS), was first used in October 2011 for the deployment of a pair of Galileo navigation satellites. Including the vehicle that is performing this mission, seven Soyuz ST-A and fourteen Soyuz ST-B rockets have departed Kourou. All but one of the Soyuz launched from Kourou – a Soyuz ST-B whose Fregat upper stage malfunctioned – have completed their missions successfully.

The Fregat will place the satellites into a near-polar orbit, with the OneWeb spacecraft operating at an altitude of 1,200 km., giving customers extremely low latency and providing communications access to the entire world with fiber-quality internet connectivity. They will operate in 18 planes of 40 satellites each, with an inclination of 87.9 degrees relative to the equator.

The mission duration from launch to end of mission is just over 82 minutes.

Run from London, OneWeb is building the world’s largest and highest throughput satellite system. To develop its constellation of satellites under 200 kg, OneWeb signed a contract with Arianespace in 2015 for 21 Soyuz launches and has also booked places on other launch providers, including Virgin Galactic’s LauncherOne.

It is expected that 300 satellites will allow it to reach service before the initial constellation – compromised of approximately 650 satellites – will provide full coverage before scaling to more than 900 spacecraft as it grows to meet demand around the world. A figure of around 2,000 has been mentioned in the company’s overall ambitions, which also includes a large number of spares.

Visualization of a OneWeb satellite in orbit – via OneWeb

Airbus has built the initial satellites, while OneWeb plans to locate a 100,000 square foot satellite manufacturing facility on Florida’s Space Coast at Exploration Park, just south of Kennedy Space Center to build the hundreds of additional satellites that will be launched over the coming years.

The satellites work on the Ku band, communicating in the microwave range of frequencies in the 12–18 GHz portion of the electromagnetic spectrum and use a technique called “progressive pitch” in which the satellites are slightly turned to avoid interference with Ku-band satellites in geostationary orbit.

The user terminal antenna on the ground will be a phased array antenna measuring approximately 36 by 16 centimeters (14.2 by 6.3 in) and will provide Internet access at 50 megabits/second.

For this first launch, six operational satellites and four “mockups” will be launched on the dispenser. 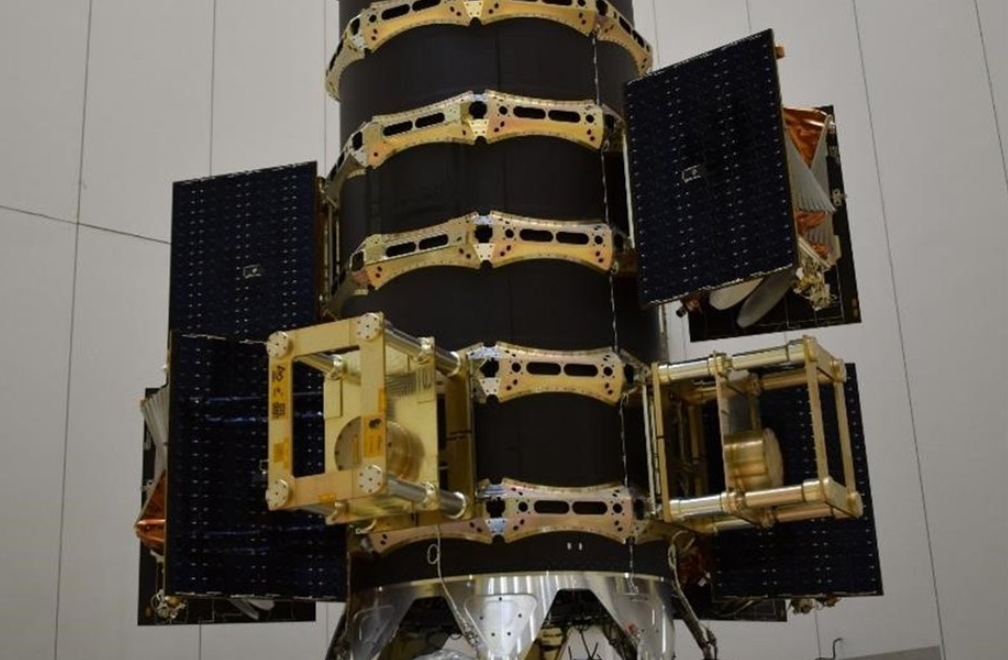 Installing the satellites on the dispenser – via OneWeb

These will provide pathfinder testing, not unlike the two Starlink satellites that SpaceX launched a year ago. Starlink is set to be another huge broadband constellation that will involve thousands of satellites.

As Arianespace’s second of up to 12 missions planned for 2019, Flight VS21 also will continue the momentum gained from the company’s year-opening launch: Flight VA247 with Ariane 5, which successfully delivered a pair of telecommunications relay platforms – Saudi Geostationary Satellite 1/Hellas Sat 4 (HS-4/SGS-1) and GSAT-31 – to geostationary orbit on February 5.