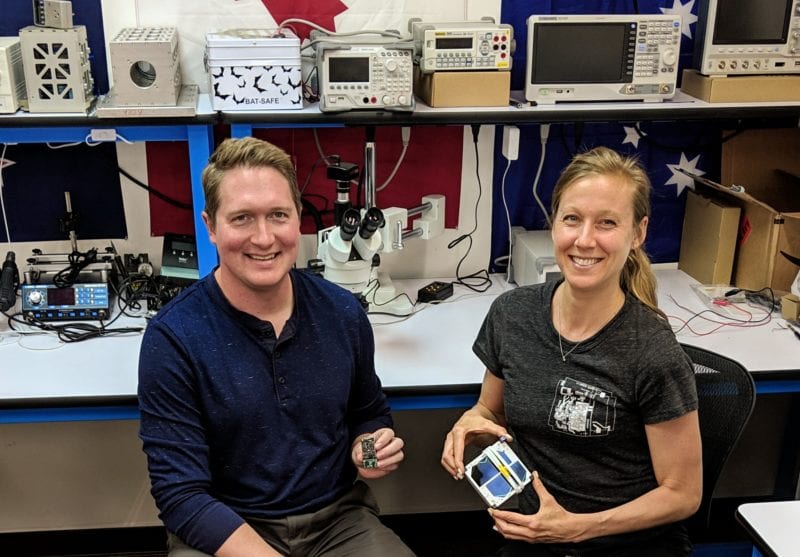 Swarm Technologies is making quite a buzz in Low Earth Orbit (LEO). With seven satellites already orbiting and 150 planned total, the ambitious company has made big financial strides in recently securing $25 million in Series-A funding. The company is working to move forward from its misstep with the U.S. Federal Communications Commission (FCC), which fined the company last year for an unauthorized satellite launch.

Swarm is now entirely focused on its mission, to close the digital divide once and for all. “We’re really excited about Swarm providing global internet services to any device, any person, anywhere on Earth. We’re starting with relatively low data rates, so we’re looking forward to improving total data rates and capacity as we deploy this network,” Swarm Chief Executive Officer (CEO) Sara Spangelo told Via Satellite.

The company was founded by Spangelo and Ben Longmier — who shared a common childhood aspiration of wanting to become an astronaut, yet complement each other with different skillsets. Spangelo currently serves as the company’s Chief Executive Officer (CEO), while Longmier focuses on technology as the company’s Chief Technology Officer (CTO). In the following interview, we chatted with Spangelo about the company’s beginnings, the recently acquired funding, and what exciting things are next for Swarm Technologies.

VIA SATELLITE: What inspired you to start Swarm?

Sara Spangelo: Ben and I had been frustrated with the existing communications structure for quite a while. That was a huge motivation, and that’s why we wanted to start Swarm — to really build something that would lend to global, affordable internet. We had been involved in balloon projects, and obviously had a background in satellite, but realized there wasn’t an elegant solution that was truly global and cost effective.

VIA SATELLITE: Congratulations on recently closing your Series A funding round with $25 million! What will you use this new funding for?

Spangelo: We found big partners who seem very happy with their involvement so far. But we’re actually focusing on three things: the first is to launch our entire constellation of 150 satellites; we have enough capital and we’re looking to deploy that in the next 18 months. The second is hiring a world class team — we’re actively recruiting and hiring right now, and you can see all the open jobs at our website. We’re looking to triple our team in 2019. And the third thing is to accelerate our software and hardware development so we can really deliver a top tier consumer experience, starting late 2019/early 2020.

VIA SATELLITE: Could you tell me about your constellation plans and where you currently are with that?

Spangelo: We currently have seven satellites in orbit. Our full constellation will be 150 and that should be up by mid-2020.

VIA SATELLITE: Many companies are developing satellite constellations — what is Swarm’s unique angle?

Spangelo: Our first unique angle is our very unique launch economics. The fact that we were able to develop a satellite that was a quarter U (.25U) enables us to launch these satellites for much lower cost relative to our competitors, and particularly relative to the existing satellite providers today. Launch costs scale directly with the mass and volume of the satellites, so if you’re able to get the satellite size down to 1/12 — which we’ve done compared to a 3U — the cost will go down to 1/12. That means we need to secure less capital to launch our entire constellation.

As for the second area, because our forecast is so small, we can go as secondary payloads on a lot of interesting launch opportunities — which provides us a lot of launch availability.

Also, the fact that we’ve executed pretty quickly up until this point — we have seven satellites which orbit, and that is pretty unique relative to our competitors. And, we have the capital in the bank to afford our entire constellation, which is also unique.

VIA SATELLITE: Which companies have you partnered with? And which ones have done pilot testing for you?

Spangelo: We have partnered with several Fortune 100 companies. The only one I can talk about right now is Autonomic at Ford. We’ve also partnered with SweetSense which is a global development humanitarian company — we’re looking forward to announcing the use cases, probably within the next quarter or two. We’ve also done other partnerships and pilots with other startups and small companies across agriculture, maritime, logistics, and energy.

VIA SATELLITE: Tell me a little more about your work with Autonomic. What would Swarm bring to the automotive industry and the future of connected transportation?

Spangelo: Ford is really committed to 100 percent connectivity. We’re able to support that goal by filling in the gaps in cell coverage. Right now, if you drive to the mountains around here, there’s a lack of cell connectivity. If you have any sort of emergency with your car, you’d be able to connect home. By putting Swarm tiles or equipment in Ford vehicles, and having Swarm satellites always overhead, people will be able to essentially hit a ‘panic’ button and request help regardless of where they are on the planet. We’re really affording the ability to have a connectivity solution on a global scale.

VIA SATELLITE: How do you see Swarm making a mark on the greater Internet of Things (IOT) landscape?

Spangelo: That’s a really interesting question — thanks for asking it! Something we’re really excited about is being able to enable IOT devices to exist anywhere on the planet, and be able to connect back to the internet — and that’s something that doesn’t exist today. So instead of just being in urban environments or where there’s low power area wide networks, you could configure your IOT device anywhere. That opens up opportunities in agriculture, in logistics, in commuter ships going across the ocean, in trucking — where trucks are going through areas where there isn’t reliable cell connectivity. We’re also hoping to help produce the ability to manage a lot of carriers and network providers, globally. So instead of having to work with AT&T here, and Comcast there, you can just work with Swarm on a global scale — and that’s a pretty unique value proposition that you can get from satellite.

VIA SATELLITE: Who do you see as your primary end user base?

Spangelo: The first is large companies, like enterprise, who are operating internet-connected devices outside of cell range. Another stakeholder are business unit owners, so Chief Technology Officers (CTOs), Chief Information Officers (CIOs), Vice Presidents (VPs) of data functions, etc., who are really trying to solve for this problem — so they look to Swarm for a connectivity solution.

VIA SATELLITE: Where do you see Swarm in the next five or 10 years?

Spangelo: We’re really excited about Swarm providing global internet services to any device, any person, anywhere on Earth. We’re starting with relatively low data rates, so we’re looking forward to improving total data rates and capacity as we deploy this network. But ultimately, its making it so there’s no excuse to not have internet connectivity, anywhere on Earth — and Swarm being the solution that will solve for that.

The post Swarm CEO: There’s No Excuse to Not Have Global Internet appeared first on Via Satellite.