The Russian federal space agency, Roscosmos, is in the final hours of preparation for launch of their Soyuz MS-10 crew vehicle with two new resident crewmembers for the International Space Station.  The crewed Soyuz, which would normally ferry three people to the Station, is carrying a reduced crew complement as part of Russia’s continued initiative to keep their total crew presence on Station to just two until the launch, late next year, of their primary science lab, Nauka.

The Soyuz MS-10 spacecraft (serial No. 740 and callsign “Burlak” – a burlak being a person who hauled barges and other vessels upstream from the 17th to 20th centuries in the Russian Empire) has been in build operations for several years in preparation for its scheduled 6-month mission to the International Space Station.

Earlier this year, Soyuz MS-10 successfully passed a series of pressure and acoustic tests to verify its fitness to carry crew to orbit, a process completed on 20 July with certification of the craft’s hermeticity – airtight-ness.

By 14 August, the core stage of the Soyuz-FG rocket – to which the four strap-on liquid rocket boosters would be mounted – was in the Launch Vehicle Integration and Test Facility (LV ITF) for pre-mate processing, signaling the start of launcher integration.

That same day, 26 September, Soyuz MS-10 was officially cleared for fueling with propellant and compressed gases by the Technical Management team.

On 3 October, after a Designer’s Inspection of the craft clear it for flight, Soyuz MS-10 was mated to its adaptor – the hardware that connects it to the top of the Soyuz-FG rocket’s third stage.

Soyuz MS-10 was then encapsulated into its payload fairing and moved from the Spacecraft Assembly and Testing Facility to the LV ITF on 6 October. 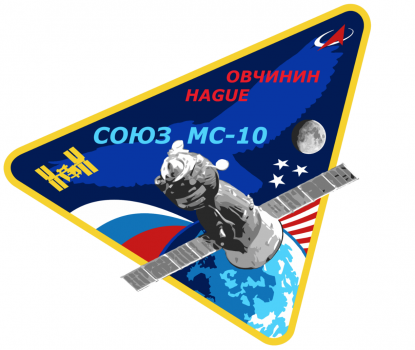 The emergency escape system has never been needed on the Soyuz-FG rocket, but it was used on 26 September 1983 during the Soyuz T-10-1 launch.  In the final seconds of that count, the Soyuz T rocket caught fire on the launch pad, and the launch escape system pulled the crew away from the rocket just two seconds before the vehicle exploded.

That incident is the only time in spaceflight history that a launch abort system has been used with a crew onboard the spacecraft.

For Soyuz MS-10, the craft and its third stage were mated to the already-integrated second and first stages before final checks cleared the rocket for transport to the launch pad, which occurred on Tuesday, 9 October. 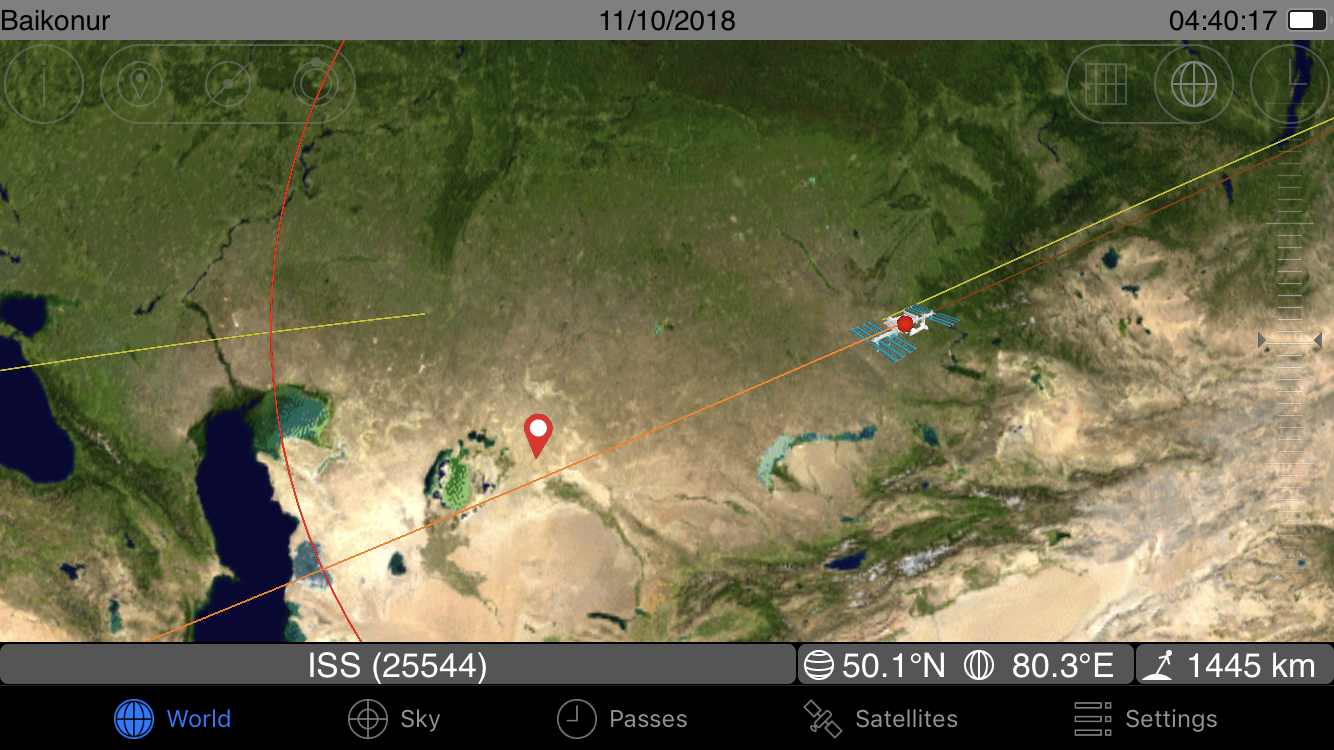 Location of the ISS in relation to Baikonur at the time of Soyuz MS-10’s scheduled launch on 11 Oct. 2018. (Credit: GoISSWatch app & GoSoftWorks)

Overall, this will be the 139th Soyuz spacecraft launch and the 65th flight of a Soyuz-FG rocket, which boasts an impressive 100% success rate since its introduction on 20 May 2001.

After leaving the pad, the Soyuz-FG will pitch East-Northeast to align itself on the proper azimuth for the 51.6° orbital inclination of the International Space Station.  At the time of launch, the Station will be 1,445 km east-northeast of the launch site at an altitude of 414 km.

The Baikonur Cosmodrome lies at 45.96° N, meaning rockets headed for the Space Station (as with Florida ISS launches) must travel in a northeasterly direction, not due east, even though the first ISS module was launched from Baikonur.

This is because due east flights from Baikonur would over-fly parts of China and Mongolia – a flight path Russia seeks to avoid so that all stages of powered ascent from Baikonur take place over Kazakhstan and the Russian Federation.

After an 8 minute 45 second flight, the Soyuz-FG rocket will deposit Soyuz MS-10 into orbit – at which point the craft’s power generating solar arrays and communications antennas will immediately deploy.

This is a critical step in Soyuz MS-10’s planned 6 hour, 4 orbit rendezvous with the Station, as controllers in Mission Control Center – Moscow (MCC-M) must verify that the craft was inserted into its correct transfer orbit to permit such a rendezvous scenario.

If, for some reason, Soyuz MS-10 is not placed into the correct orbit, or its orbit cannot be verified quickly after launch, the two-person crew and MCC-M will revert to a 2 day, 36 orbit rendezvous with the Station (which is always available).

Under the nominal plan, Soyuz MS-10 will nudge its way up from an initial ~200 km orbit to the Station’s ~415 km orbit with a series of course correction/alignment burns to bring itself to a station-keeping distance from ISS aligned with its docking port on Poisk docking compartment.

Soyuz MS-10’s rendezvous will be completely automated, with manual control available should the automated systems fail. 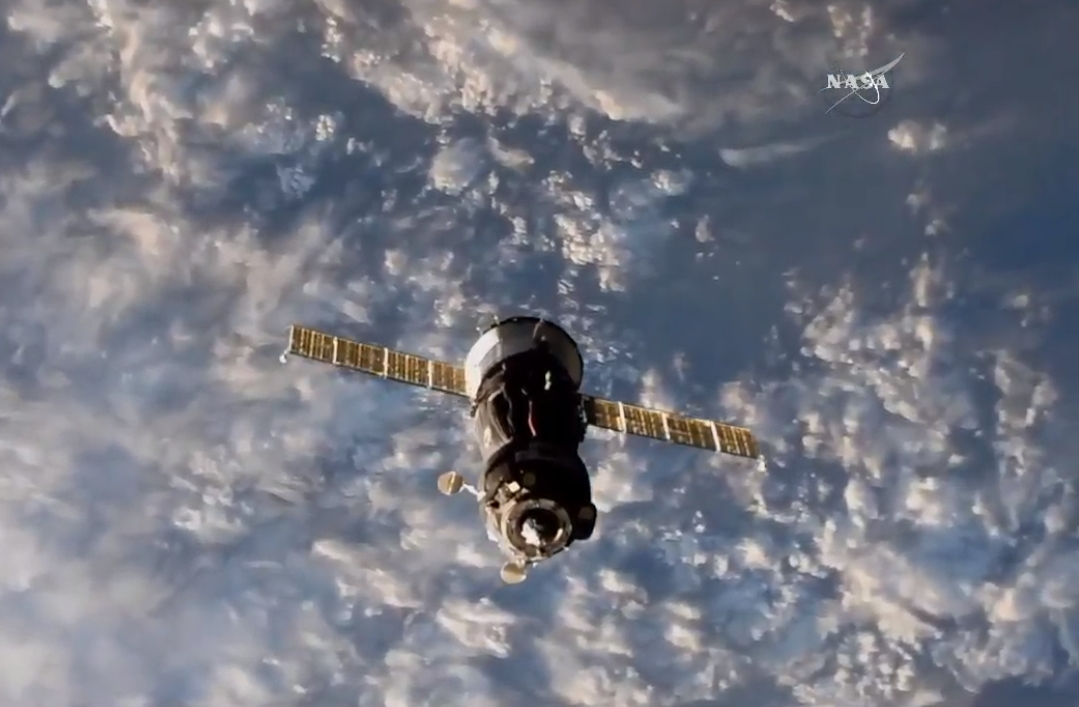 Docking is scheduled for 1444 UTC (10:44 EDT) – 6 hours 4 minutes after launch while the two craft travel northeast across the central North Atlantic Ocean.

The automated docking process is historically so accurate and efficient that docking usually occurs several minutes ahead of the published timeline.

Once contact is made between Soyuz MS-10’s docking port (located at the top of its Orbital Module) and the Poisk docking compartment, hooks will “capture” Soyuz to the Station.  After that, a series of latches on the Soyuz’s docking interface will drive into the ISS to form a hard dock between the two vehicles.

Vestibule pressurization and leak checks will then follow, after which hatches between the Station and Soyuz MS-10 will be opened. 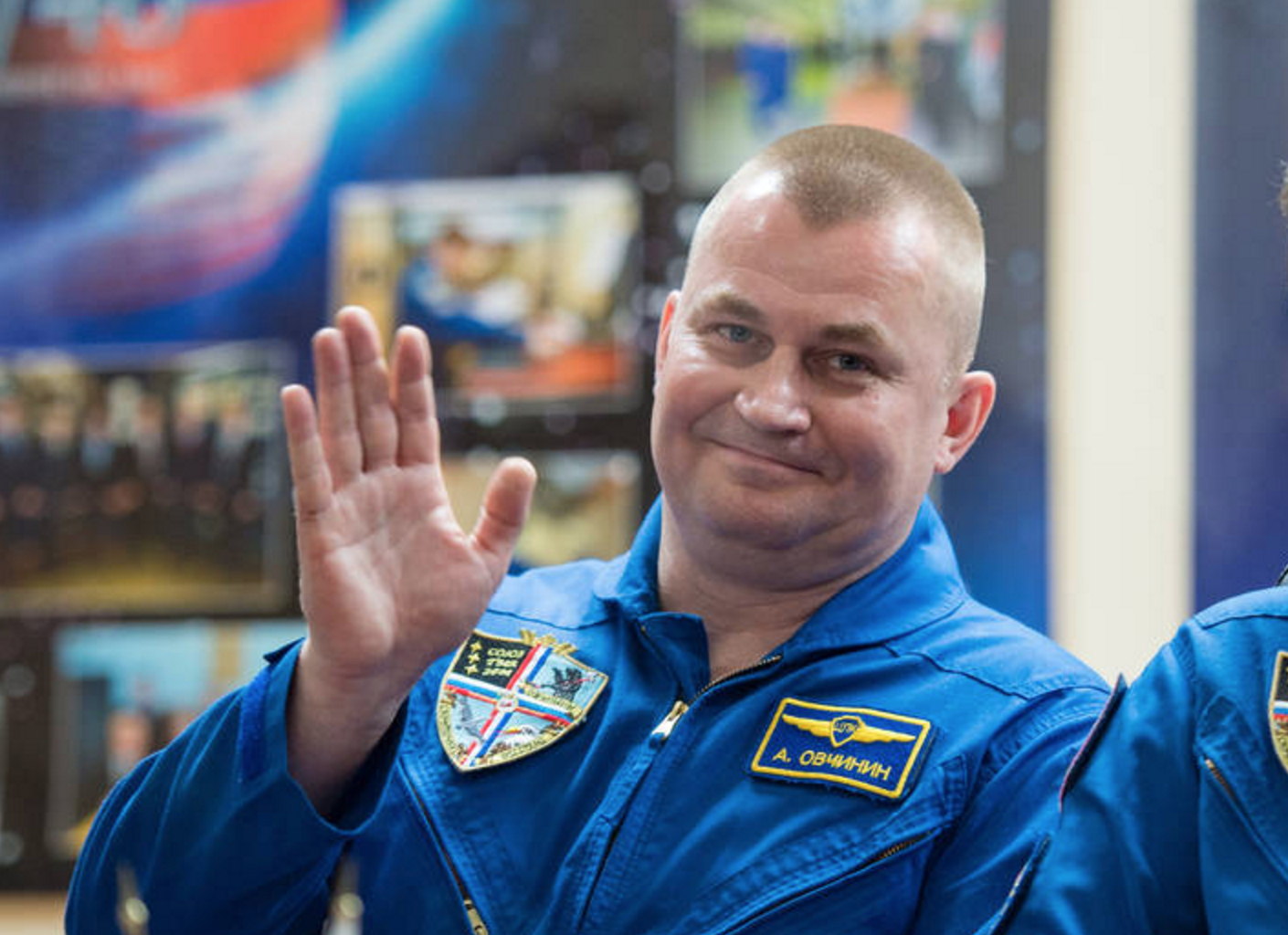 While at Yeisk, Ovchinin qualified as a pilot-engineer, after which he served as a pilot instructor in the Training Aviation Regiment (TAR) at Yeisk Higher Military Pilot School until February 1998.

Following his TAR post, Ovchinin was appointed commander of the aviation section of Krasnodar Military Aviation Institute before moving on to command the aviation unit of the 70th Separate Test Training Aviation Regiment of Special Purpose.

Throughout this portion of his career, Ovchinin amassed over 1,300 flying hours in Yakovlev Yak-52 and Aero L-39 Albatros aircraft.

In 2006, he was selected as a cosmonaut candidate and began training at the Yuri Gagarin Cosmonaut Training Center and participated in water landing Soyuz training in June 2008 before qualifying as a test cosmonaut on 9 June 2009.

On 26 April 2010, he was finally certified as a cosmonaut, after which he was dismissed from the Armed Services and classified as “reserve.” 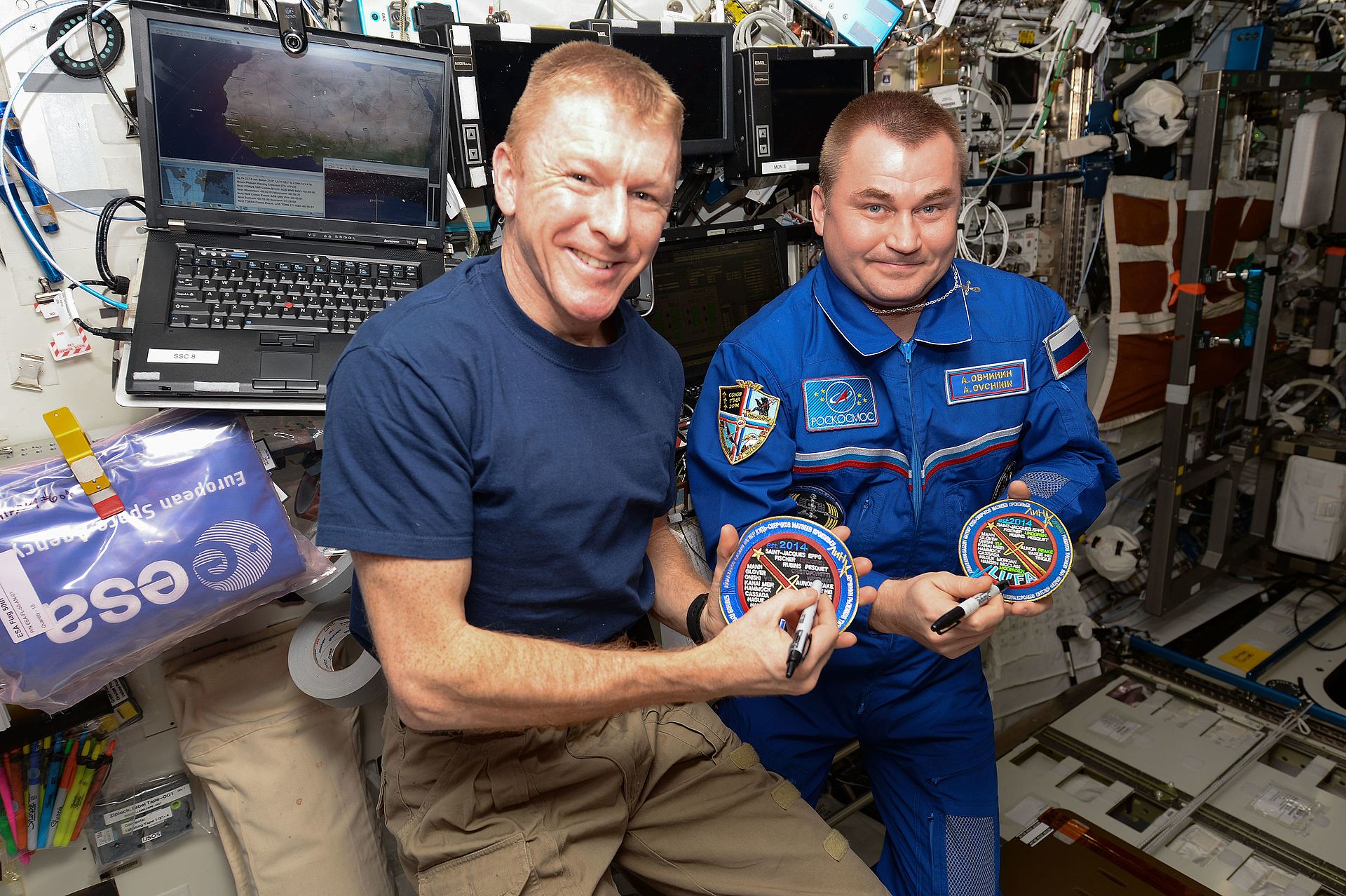 Ovchinin aboard the ISS during Expedition 47. (Credit: NASA)

Soyuz TMA-20M launched on 18 March 2016 and delivered Ovchinin and two other crewmates to the International Space Station for Expeditions 47 and 48.

During Expedition 47, Ovchinin served as Flight Engineer 3, and was on the Station when SpaceX CRS-8 arrived carrying Bigelow’s inflatable BEAM module – which was attached to the ISS for in-orbit qualification.

For Expedition 48, Ovchinin moved up to serve as Flight Engineer 1 and, from inside ISS, assisted with two U.S. EVAs (spacewalks) – the first of which installed an International Docking Adaptor for Commercial Crew and the second of which retracted a thermal radiator on the Station’s Port truss.

Ovchinin and his two crewmates returned to Earth on 7 September 2016 on the Soyuz TMA-20M after 172 days in orbit.

With his landing, Ovchinin became the final person to command a Soyuz TMA-M series spacecraft, which was replaced by the Soyuz MS-series he commands on his second voyage today.

Hague was born in Belleville, Kansas, in 1975 – graduating from high school in Hoxie, Kansas, before attending the United States Air Force Academy, where he earned a Bachelor of Science in Astronautical Engineering in 1988.

That same year, he was commissioned as a Second Lieutenant in the U.S. Air Force in May 1998 before starting his Masters work at the Massachusetts Institute of Technology, earning an advanced degree in Astronautical Engineering in 2000.

In August 2000, he was assigned to Kirtland Air Force Base, Albuquerque, New Mexico, where he worked on advanced spacecraft technologies.  In 2003, he attended the flight test engineering course at the United States Air Force Test Pilot School, Edwards Air Force Base, California.

Following graduation in 2004, he worked at the 416th Flight Test Squadron, testing F-16, F-15 and T-38 aircraft.  In late 2004, he deployed for five months to Iraq in support of Operation Iraqi Freedom, conducting experimental airborne reconnaissance. 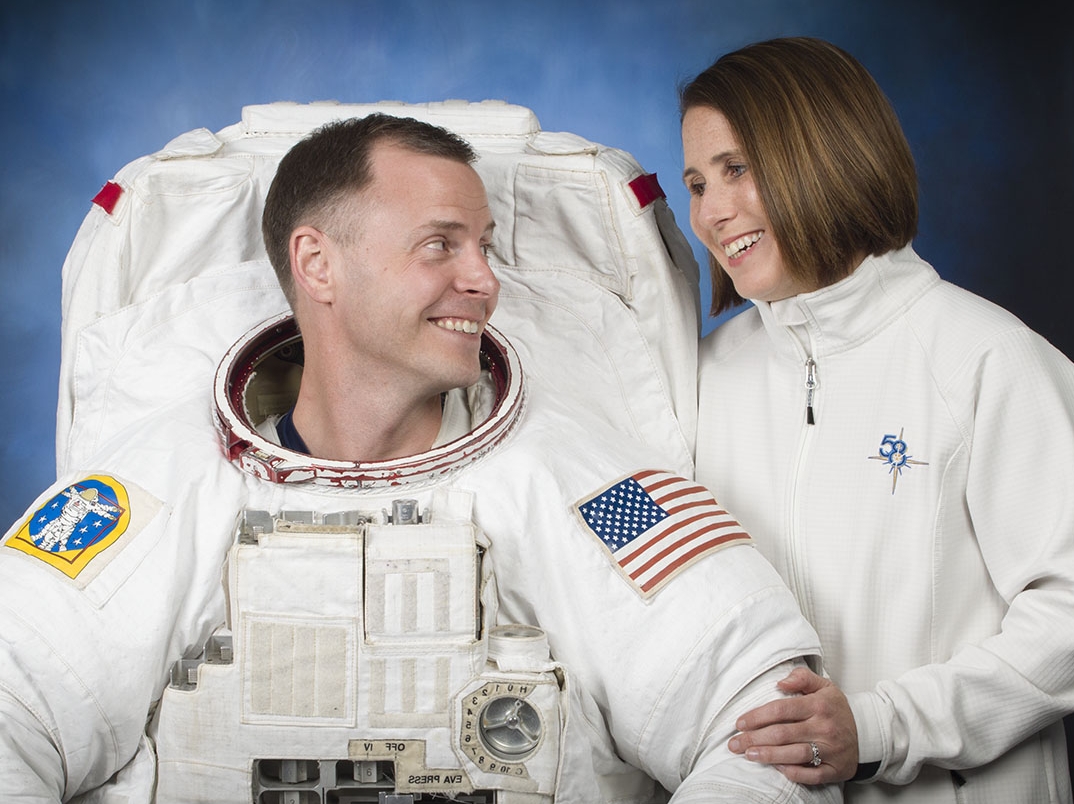 In 2009, he was selected for the Air Force Fellows program in Washington, D.C., assigned as a member of the personal staff in the U.S. Senate to advise on matters of national defense and foreign policy.

Following the fellowship, Hague served in the Pentagon as a congressional appropriations liaison for United States Central Command before being assigned in 2012 to the Joint Improvised Explosive Device Defeat Organization, Crystal City, Virginia, as the Deputy Division Chief for research and development.

Hague worked there until 2013 when he was selected by NASA as an astronaut candidate, upon which he reported to the Johnson Space Center in Texas for two years of astronaut training.

In June 2016, Hague was promoted to Colonel – the same year he was selected for his first spaceflight as a member of the Expeditions 57 and 58 increments on the International Space Station following launch on Soyuz MS-10.