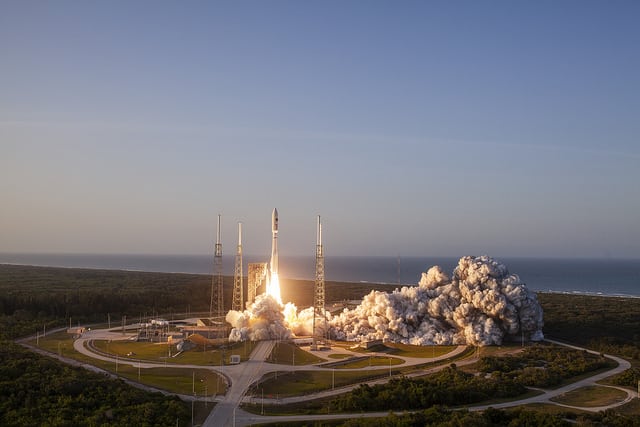 Viasat has chosen the launch vehicle that will deliver one of three critical Ka-band satellites into orbit, bringing the Carlsbad-based satellite operator’s vision of a worldwide 100+ megabit-per-second (Mbps) broadband offering closer to reality. United Launch Alliance (ULA) beat out competitors for the first of the ViaSat-3 series launch contract – the first since ULA assumed responsibility of the Atlas V from Lockheed Martin Commercial Launch Services earlier this year. An Atlas V 551 will carry a ViaSat-3 spacecraft into orbit between 2020 and 2022, launching from Cape Canaveral Air Force Station in Florida.

The ViaSat-3 series is currently in development by Boeing. Once launched, the satellite aim to create a network that distributes high speed broadband so powerful it can stream 4K ultra-high definition video to any home in the world. The first two ViaSat-3 class satellites will focus on the Americas and on Europe, Middle East and Africa (EMEA), respectively, with the third satellite planned for the APAC region, completing Viasat’s global service coverage. Each ViaSat-3 class satellite is expected to deliver more than 1-Terabit per second of network capacity, and to leverage high levels of flexibility to dynamically direct capacity to where customers are located.

In a company blog post  Viasat CEO Mark Dankberg lauded Viasat-3’s ability to relocate resources to customers on the fly. “One of our key design criteria for Viasat-3 was to have the flexibility to allocate bandwidth resources efficiently over very broad geographic areas, while still being able to focus it on very small ones … The innovations in the Viasat-3 system do what until now has been impossible in the telecommunications industry – combining enormous network capacity with global coverage, and dynamic flexibility to allocate resources according to geographic demand,” said Dankberg.

Viasat will announce specific mission assignments for each of the contracted launch vehicles at a later date.