The Boeing team is working to finish the integration of the first engine section element of NASA’s Space Launch System (SLS) Core Stage by focusing its efforts in short-term team challenges. Boeing management recently challenged the team at Michoud Assembly Facility (MAF) in New Orleans to complete packages of major work items within a few weeks. They are currently beating or meeting those deadlines as the Core Stage prime contractor aims to hold to a late Fall completion date for the element.

The engine section is the pacing item in the schedule for completing Core Stage-1 (CS-1), the first flight vehicle which will fly on Exploration Mission-1 (EM-1).

While the team challenges resulted in a series of major hardware installations inside and outside the engine section, welding tubes and testing wiring also continues.

Boeing continues to work around-the-clock shifts on the element, looking to make up time lost in the first half of the year after recovering from the tubing contamination discovered in February. Tubing that is being installed in the compartment was not fully cleaned by the supplier as required prior to delivery to MAF. 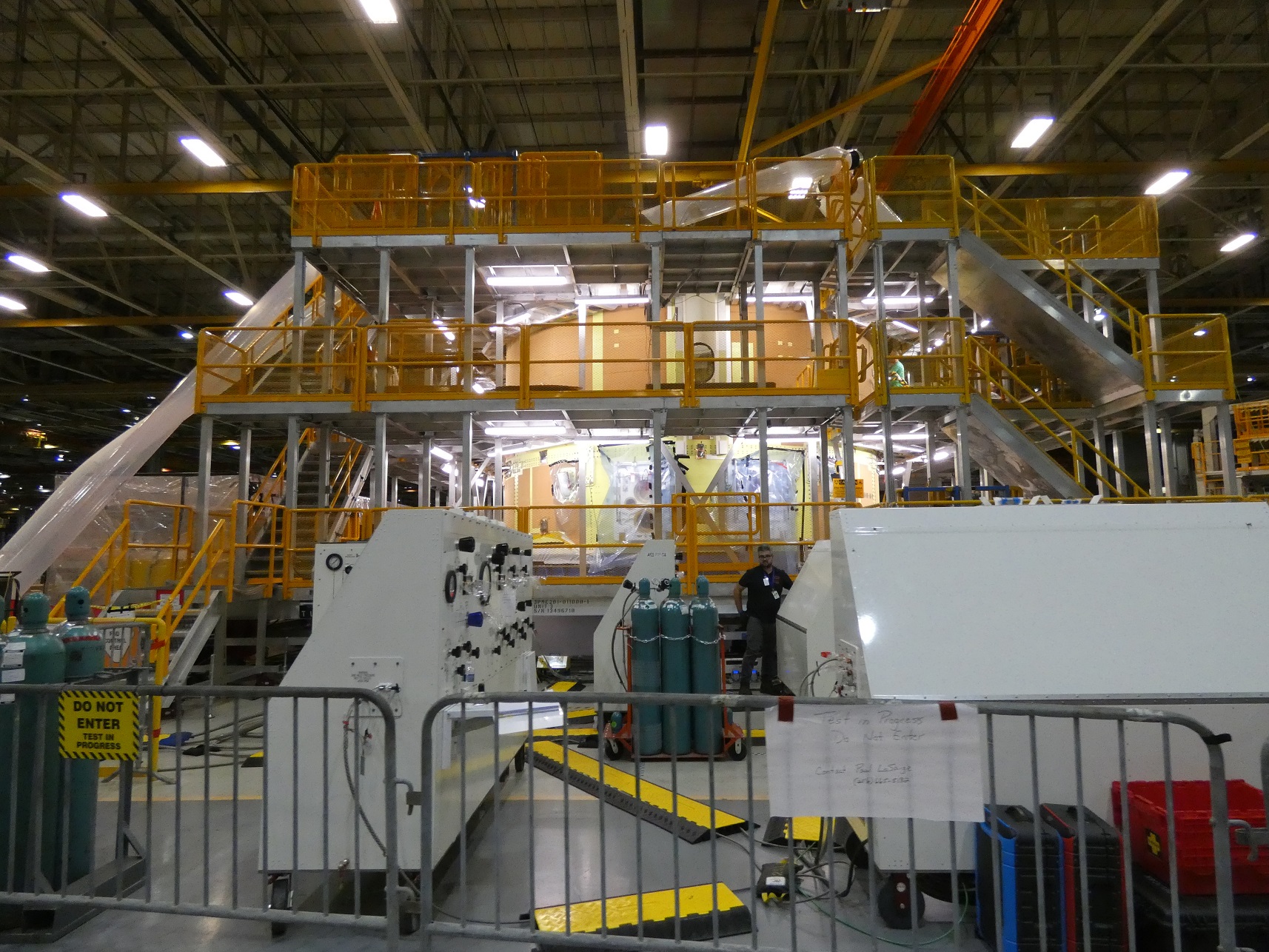 The +Z side of the CS-1 engine section surrounded by scaffolding and clean room ventilation hoses on August 13. The light brown areas are cork panels that will eventually cover most of the outside. Credit: Philip Sloss for NSF/L2.

Management is looking for ways to pick up and maintain a higher level of productivity and gave the engine section team a challenge in mid-June. They gave the team two weeks to lift all five of the large composite overwrapped pressure vessel (COPV) gaseous helium tanks, four thrust vector control (TVC) platforms, and the outfitted avionics bay shelf into the engine section and install them.

“This whole area [outside the engine section] was populated with five helium tanks, and four platforms, and an AV (avionics) bay, and we came in two weeks ago and said look, we want to fly all that stuff in and assemble it,” John Shannon, Boeing’s SLS Vice President and Program Manager said in July. “And they were like: ‘what?'”

“The team, they just pulled together and they got it done — three days early, too,” he added. “They did all that work, put the platforms in, [and] took one NC (non-conformance) for one little drill thing.  Just a phenomenal job.”

NASA and Boeing leadership visited MAF in early July to thank the team for its work and serve lunch to the different work shifts. With the uncertainty removed about the sequencing and availability of tubing for installations, Boeing is hoping to maintain the higher pace of work the team demonstrated in that challenge during the last two weeks of June. 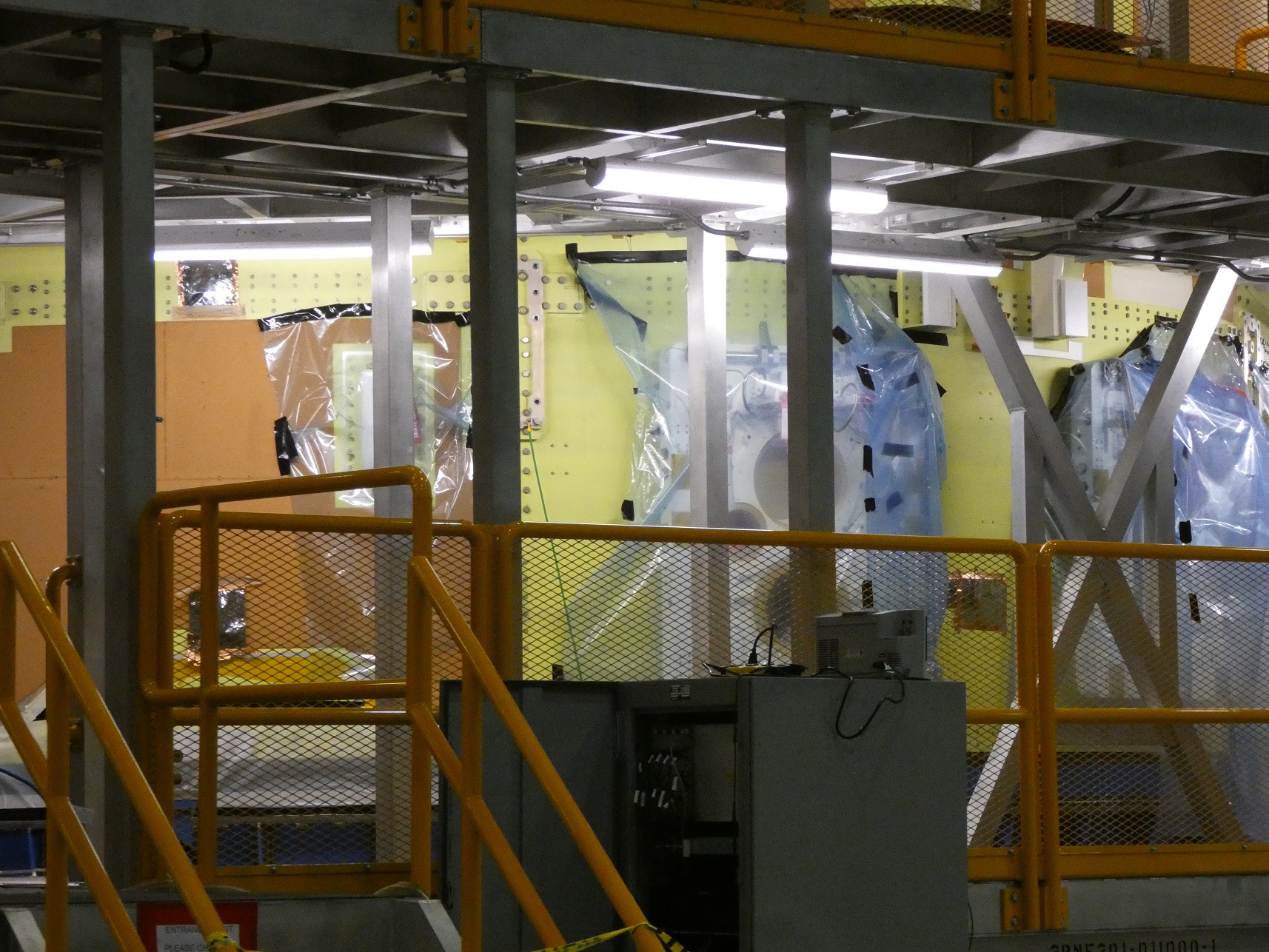 The tail service umbilical plates on the +Z side of the engine section. Among several services provided to the vehicle from the ground at the umbilical plates, LOX will be loaded from the left side panel, LH2 from the right. Credit: Philip Sloss for NSF/L2.

“In fact, ten percent of the total build was done in the last two weeks, just based on the amount of installations that we had,” Rick Navarro, Boeing’s Director of Space and Launch Operations, noted at the time. “If we sustain that path, we will be able to be ready for stacking by the late Fall.”

“We’re on a pace that puts us ready for stacking by late Fall,” Navarro said in early July. “Over the last four or five weeks, as we got through all the tube recycling issues and got them all back in the right sequence we’ve picked up the pace dramatically.”

Since last month, the team has met similar timed challenges to install dozens of wire harnesses inside the engine compartment and the first of two sections of the liquid oxygen (LOX) feedline that mount to the outside.

“That process will be a temporary initial install,” Steven Ernst, Boeing’s Core Stage Engineering Support Manager, said in early July about the wire harness install challenge. “We won’t be clamping them up, we’ll be tying them off.”

“[We’ll] check all the routing [and] make sure we understand that we’ll do measurements to make sure we have the right-sized clamps, and then as we get the P-clamps installed, they start clamping up the routing.”

The ends of the section are bolted flanges that will have to precisely line up with other sections of the propellant line.

“Siting of this is extremely critical because the mating surface of the downcomer is a datum that you have to align around on the upper flange,” Ernst said in a follow-up interview on August 15. 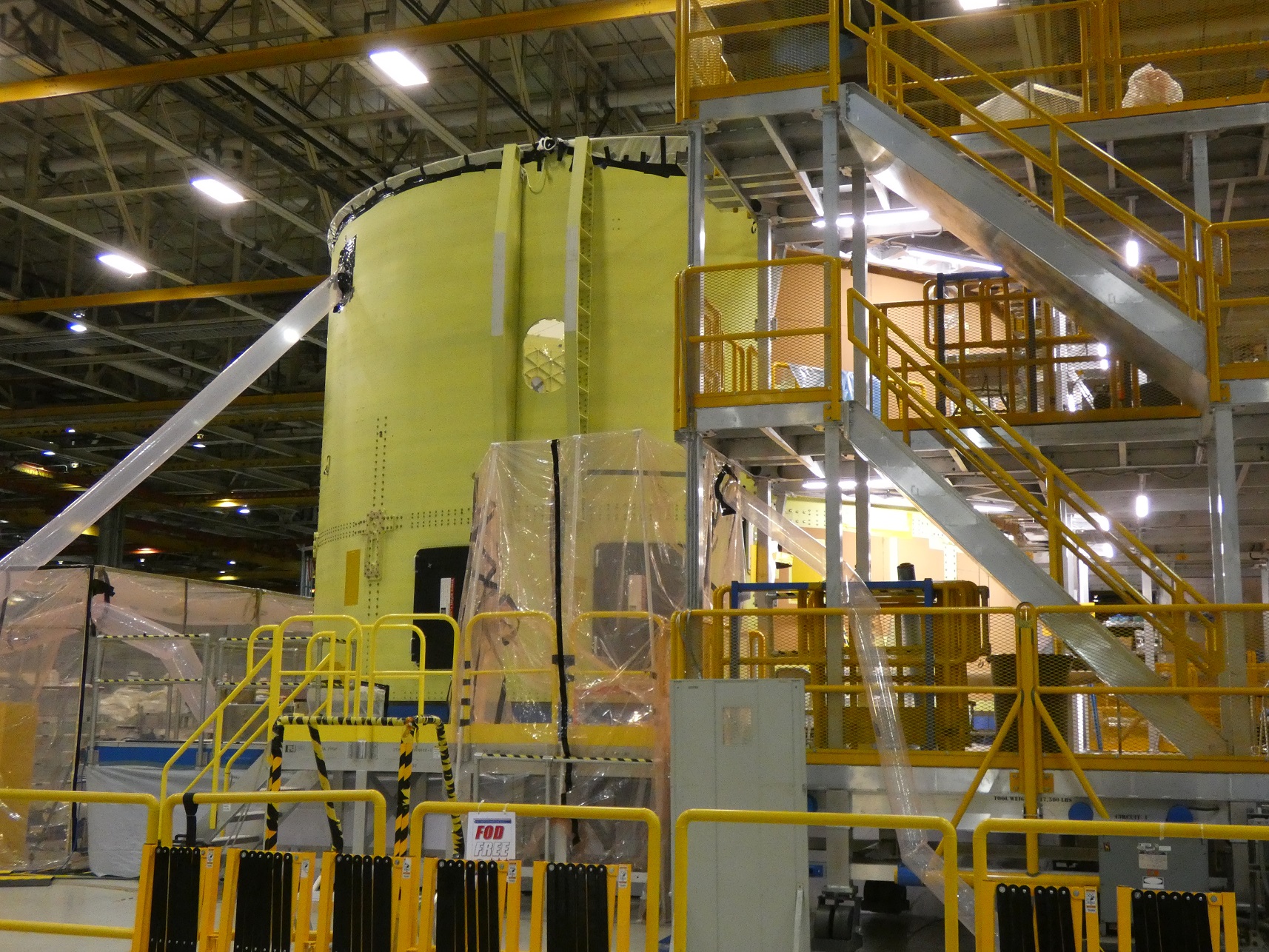 CS-1 engine section in late February, better showing the reaction beams (upper left center) that will eventually surround the +Z LOX downcomer. The outside pockets can be seen on the right beam; those will eventually be filled in with spray-on foam insulation (SOFI). Credit: Philip Sloss for NSF/L2.

“Conversely on the feedlines you [have] to do things on the other side of the mate so that when you bring these together eventually they all align.” The section is an elbow, with the bottom flange inside the barrel.

The assembly also has a plate that wraps around the propellant line and is attached to the outside of the engine section on either side of the line. “We have to align, not only for that upper flange, but for the flange inside,” Ernst said. “You go through and you laser shoot these in and then we match drill the holes [to the outside].”

“Those are actually pocketed beams,” Michael Alldredge, NASA SLS Core Stage TPS Team Lead, noted. Ernst said that the mirror image downcomer section for the +Z side is completing its offline TPS work and then it will also be installed.

The engine section is even more densely packed on the inside than other areas on the stage when complete, so most of the work inside was planned to be installed in strict sequences.

“We have to be very selective of when we put big components in because you’re going to close yourself from accessing to other areas,” Navarro said. “All those miles of tubing and all those [wire] harnesses, we have to do them in layers, because once we put in a big piece of ducting you pretty much can’t get back in there.” 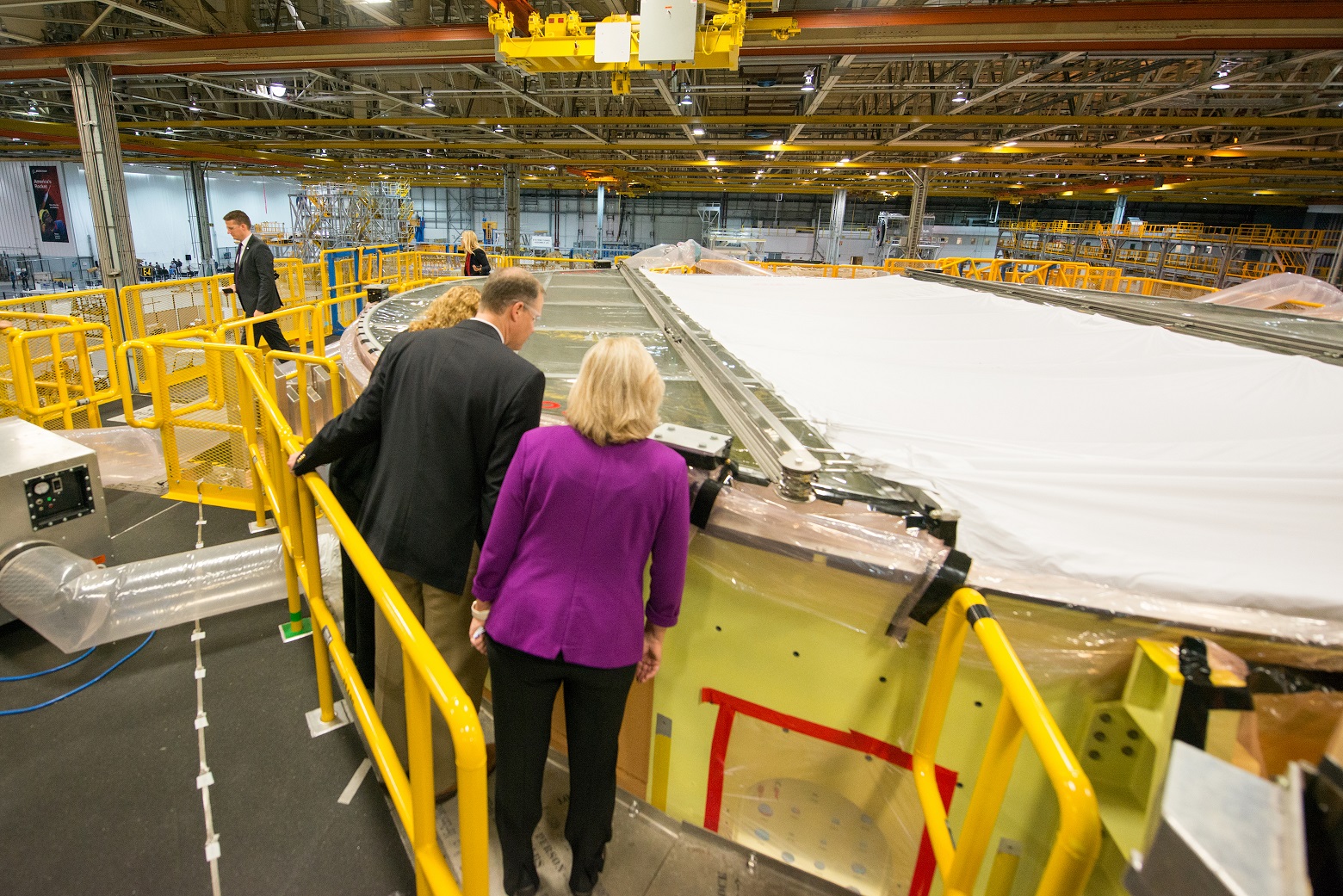 NASA Administrator views the inside of the CS-1 engine section from its top work platform at MAF during his tour of the facility on August 13. Marshall Space Flight Center director Jody Singer is to his right. Credit: NASA/Jude Guidry.

“We planned it out by zones and we know we need to put this in before this and this after this,” Ernst added. “There’s been a lot of effort put into that planning.”

A lot of the tubing is going into the engine section, which requires a lot of welding inside. “We have approximately 250 to 260 orbital tube welded connections we have to make,” Navarro noted in early July. “These are not the mechanical fasteners, these are actual orbital tube welds. We just passed the hundred-mark on orbital tube welds, so we’re reaching the halfway mark in the total weld jobs.”

“We have picked up the pace significantly in welding, so we’re able to handle up to seven welds in a day if we need to,” he added. “So now it’s a race to finish the remaining hundred-plus welds, [and] connect all the systems.”

Ernst noted that in contrast to the big propellant lines that have bolted flanges, orbital tube welding makes for a reliable connection for things like the smaller high-pressure lines.

In an update at the time of the interview on August 15, Ernst also noted that they have now passed the 50 percent mark with orbital tube welding inside the engine section.